Two new roses in my garden.  Grace was planted in a pot last year, and Ghislaine de Feligonde only this year.  I bought Grace during a visit to David Austin last year.

I only got the rambler Ghislaine de Feligonde, this year after hearing it being lovingly described by Mrs Ann bird, Vice President of the Rose Society at the Kenilworth and District Horticultural Society.  She gave the lecture in March, and the very next day, I went to visit Hinton's Nursery .  They were expecting an order from David Austin the following week, and with a phone call and an email they managed to get me Ghislaine de Feligonde.   I have been amazed by this beautiful perpetual rambler.  I love going into the garden and picking a few flowers for the house, or for posies for friends...and with a new rose, I feel it is kinder to cut the flowers quickly and allow the shrub to grow good roots and leaves rather than spend energy on blooms...well that is my excuse. 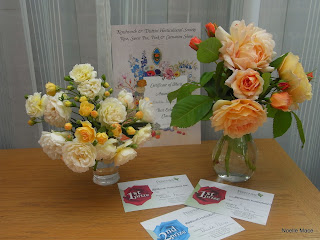 I was delighted to win two first prizes for these and also best in Classes 1 - 4.

Grace is a beautiful apricot colour, and already in late August, a whole second flush of roses which my Aunt admired yesterday.  Aunty Pat has failing eyesight, with macro degeneration, but she had to stop at this rose...she thought at first it was a large dahlia plant, the flowers were so numerous and colourful. 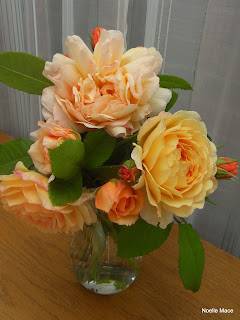 The past few months have been so busy for me....and I am now having to take it a little slowly due to a sore thumb joint...and whilst I was sorting through a pile of papers, whilst dear hubby was doing the heavier jobs, washing up, hovering, well jobs which hurt my hand....I came across my certificates etc. so I looked up the pictures I took at the time, and decided to put them up.  Nice to look back on during the winter months!
Posted by Stasher at 14:58