Its virtually two months since our trip, and its only now that I feel that I can resume.  The reason is that a dear friend and her family have been devastated by the loss of their son in the mountains of Norway on a walking holiday, and I have been reflecting on this.

The accident happened just days after our return.  I had met this young man on a couple of occasions, and I know that he enjoyed my preserves too.  Its just over a week since I attended his funeral service.  It was a moving experience and I got to know much more about James through a wonderful oration given by his friend and also some ministers of his church.  He lived his life well, was an inspiration and a leading light, may that light and his love continue to shine and guide and touch his family and friends during all their lives. 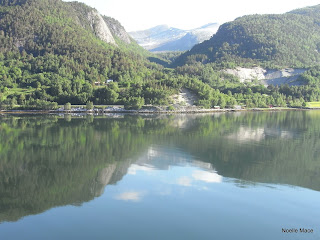 Andalsnes is a very small town with around 3000 inhabitants.  We arrived there early before breakfast I stood on the balcony watching the reflections of the mountains and clear sky on the glass like surface of the fjord.  The only waves or ripples were those made by the Ventura. 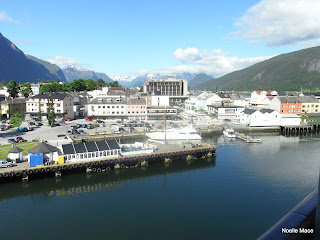 We enjoyed walking around Andalsnes.  There was a wonderful room jutting over the water the light must have been wonderful there, and the insulation must have had to be superb for the winter too. 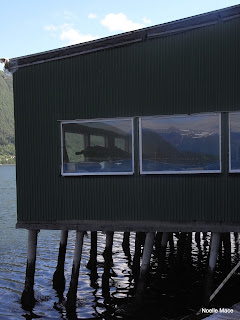 We went into a shop which was full of gorgeous things to make your house homely in the Scandinavian style.  Mainly pale colours which would reflect the light on the long dark winter days 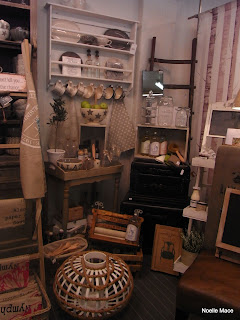 Walking back to the ship, one got the scale.... 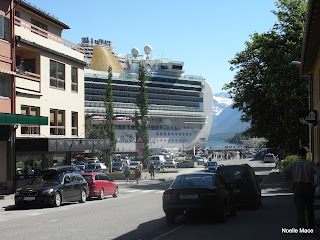 We had booked to have a trip on the Rauma Railway a wonderful scenic ride up the valley, with a coach back.  Some people on the ship had hoped to do this themselves, but were disappointed as the scheduled trains ran only a couple of times a day, and this was a fully booked excursion train. 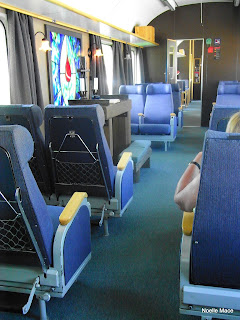 Whilst waiting for our train we popped into a train carriage which had been set up as a chapel.  It had a peaceful atmosphere.  Its stained glass window and altar were beautiful. 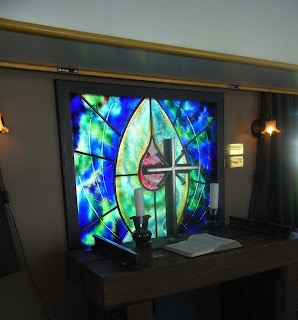 The Rauma Railway is one of Norway's most spectacular train rides, and as this was an excursion train it went slowly so that we could fully enjoy the spectacular views. Amongst the most spectacular was Trollveggen which is the highest perpendicular mountain wall over 1800 metres high. 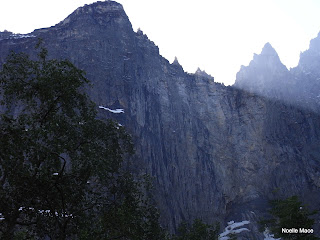 The train crisscrossed the valley passing over spectacular viaducts and through tunnels piercing the solid rock.  The air was clear, the light bright, and the temperature 19 C...perfect. 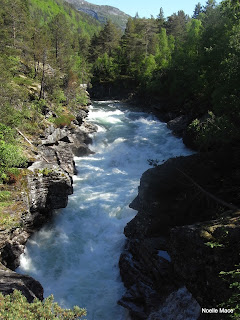 On the way back we had a German Guide, and enjoyed the return stops where I tried to spy the famous trolls in the mountains....these two were easy to spot! 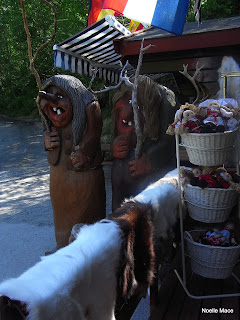 There is always time to spot a few flowers..... 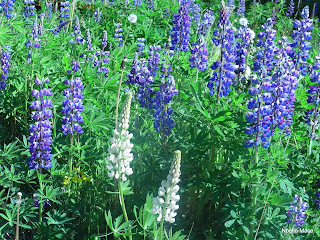 some lupines growing wild along the edge of the fjord, and some upward pointing fuchsias in the tubs by the docks, is there an Andalsnes in Bloom group? 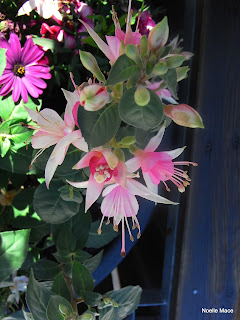