We've been sitting in the Gazebo at the end of garden, with cool drinks.  Under the large conifer it is about the coolest place there is.  In a pot theHydrangea Paniculata Vanille Fraise has excelled itself.  I think I shall have to put in some stakes to help take the weight of the large inflorescences. 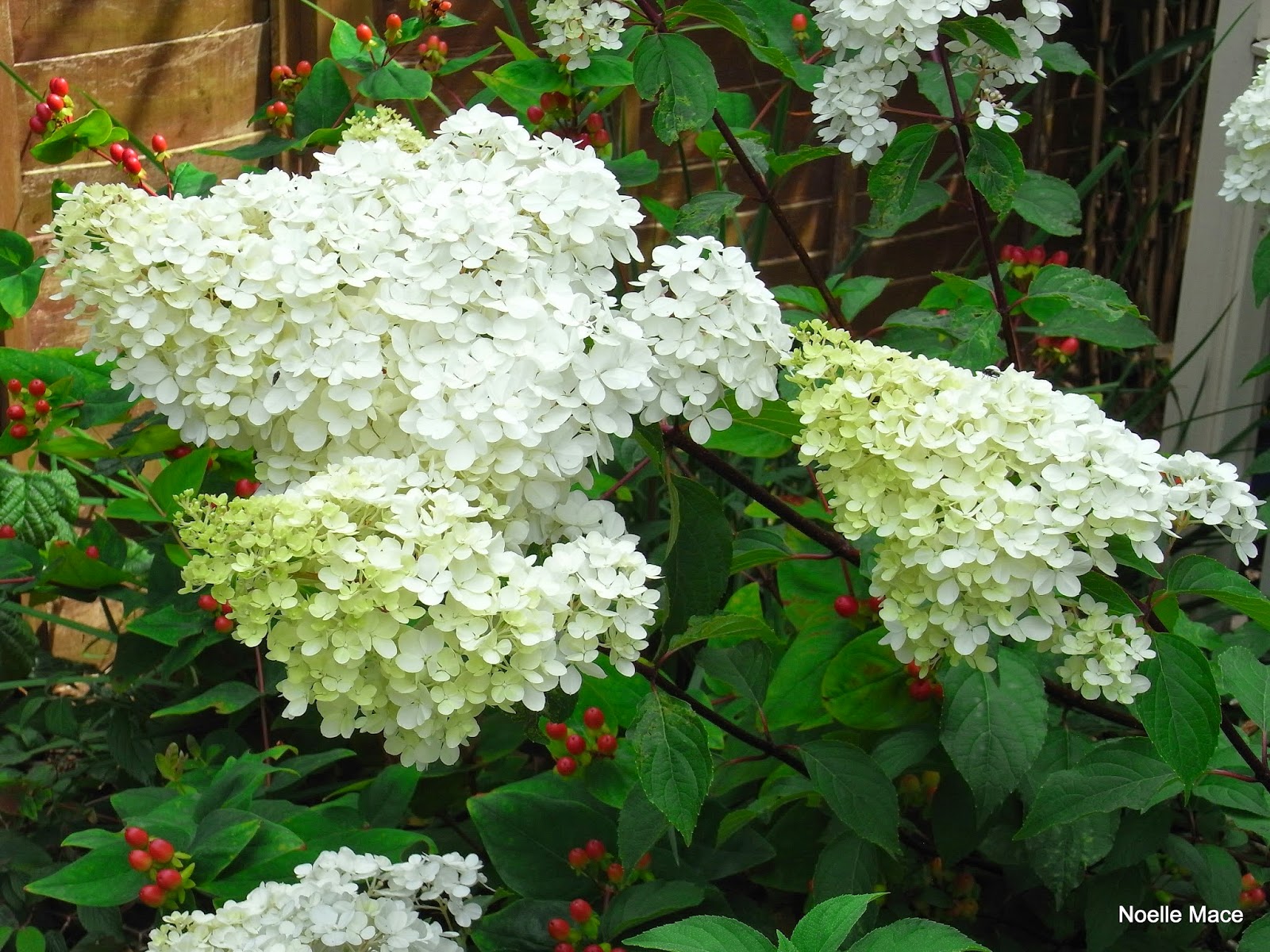 I bought this plant about three years ago.  I do keep some plants in pots, planting them into larger pots each year, and moving  them around the garden. 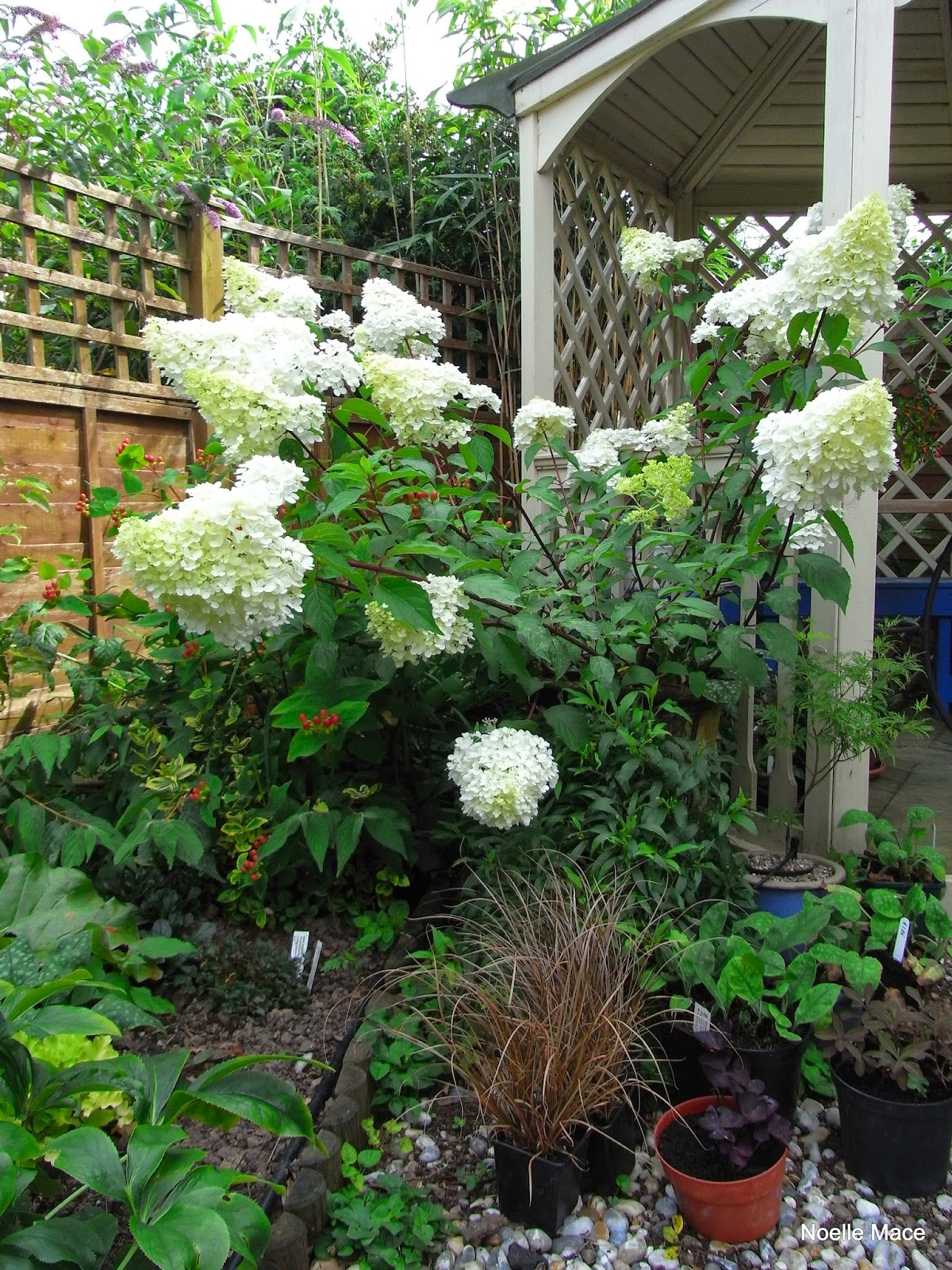 Up against the conservatory this Clematis Viticella Purpurea Plena..the name says it all:  purple full flowered clematis is the best it has even been.  Each morning this week, as we breakfast, I have watched a large & fat light brown slug slither on the glass or eat round a leaf just close.  This morning, we were a little later, or maybe it knew I would be out with my slug catcher hat on!  And each day the squirrel manages to enter the net and get more pears! 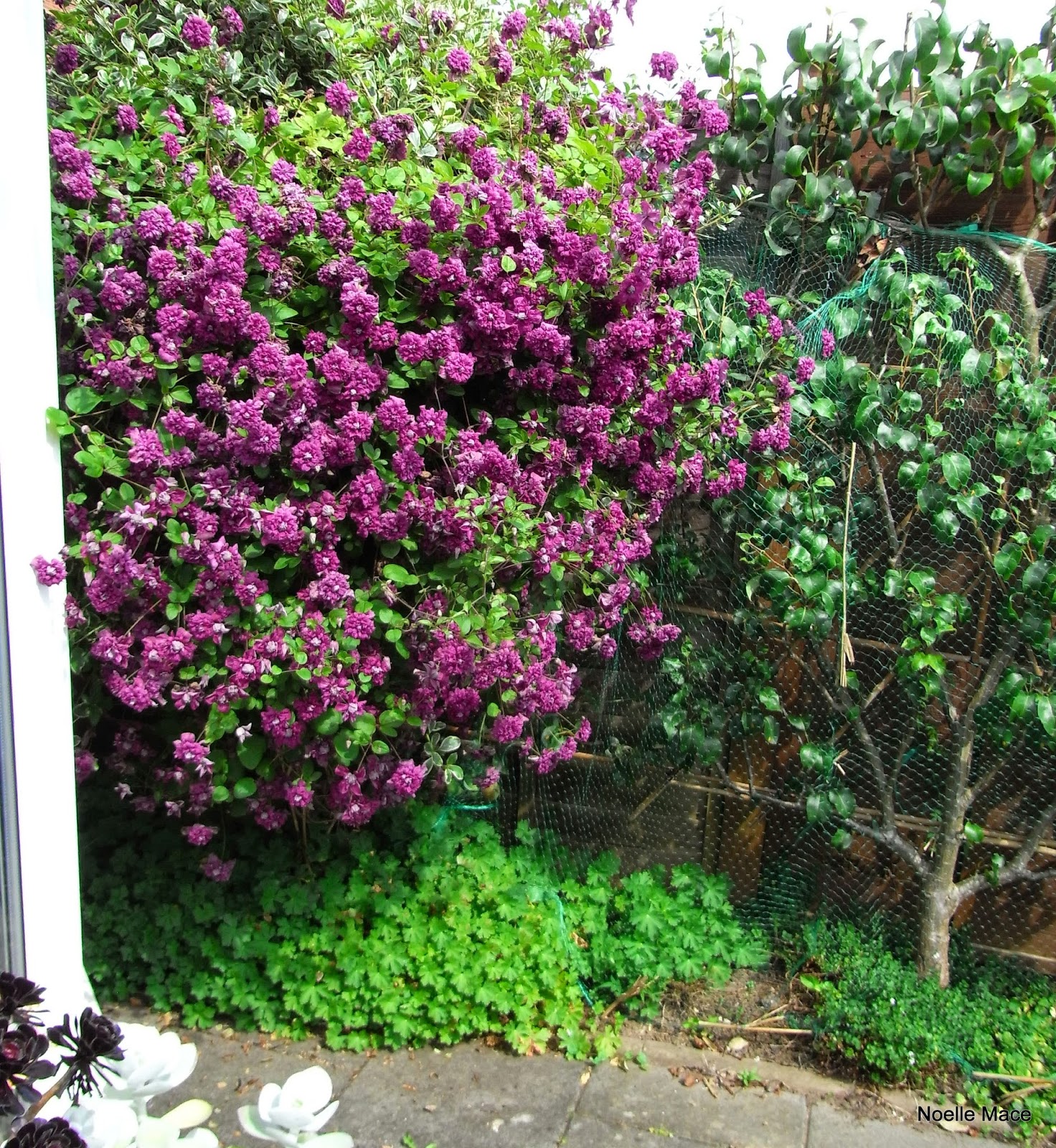 The little chilli plant found it just too hot, so it is now on the table in the shade. 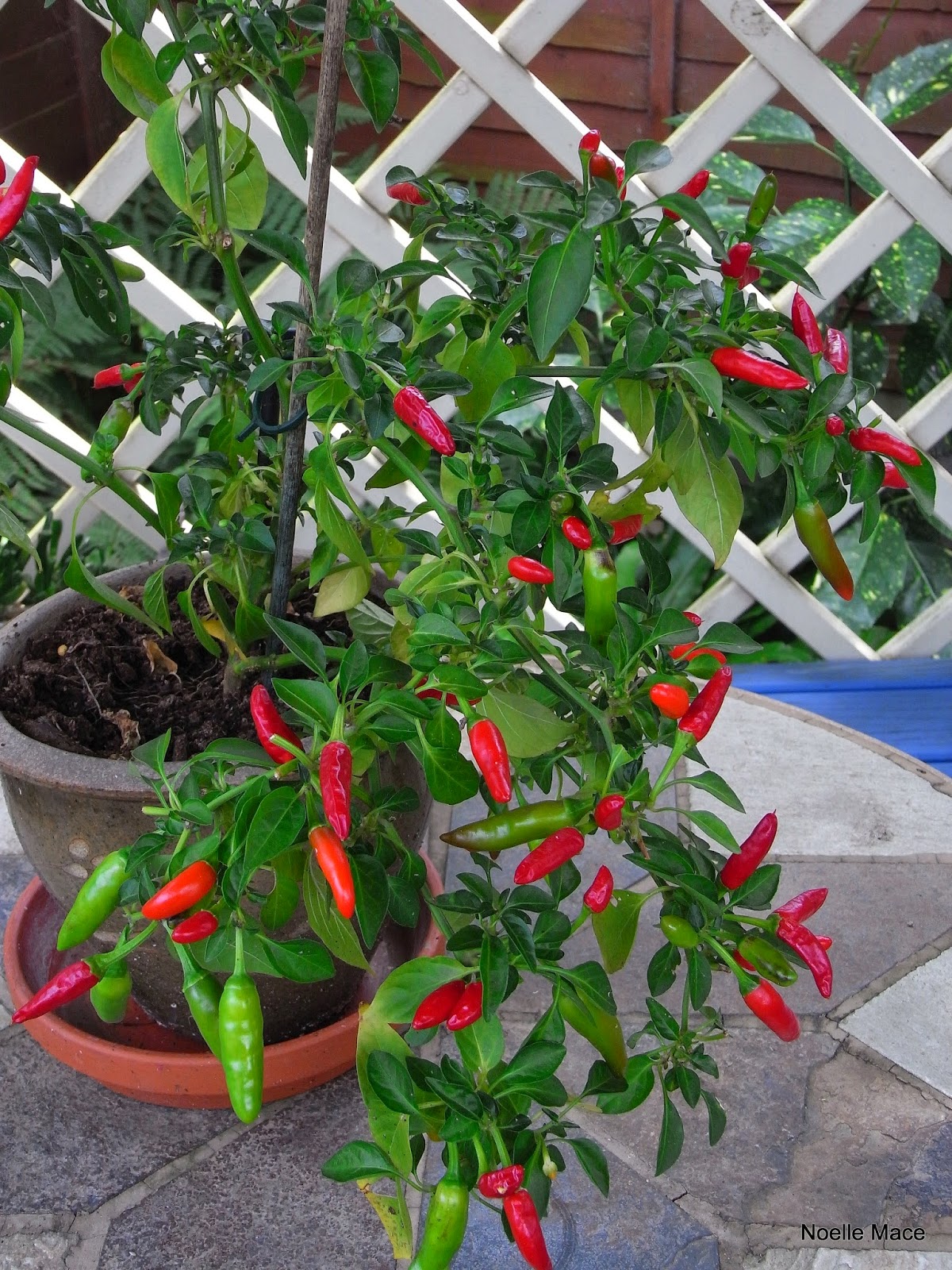 It was the leaves which attracted me to this Stachys 'Sharan Pink', and now it is looking really pretty in flower.  I think this will one which I shall try to propagate. 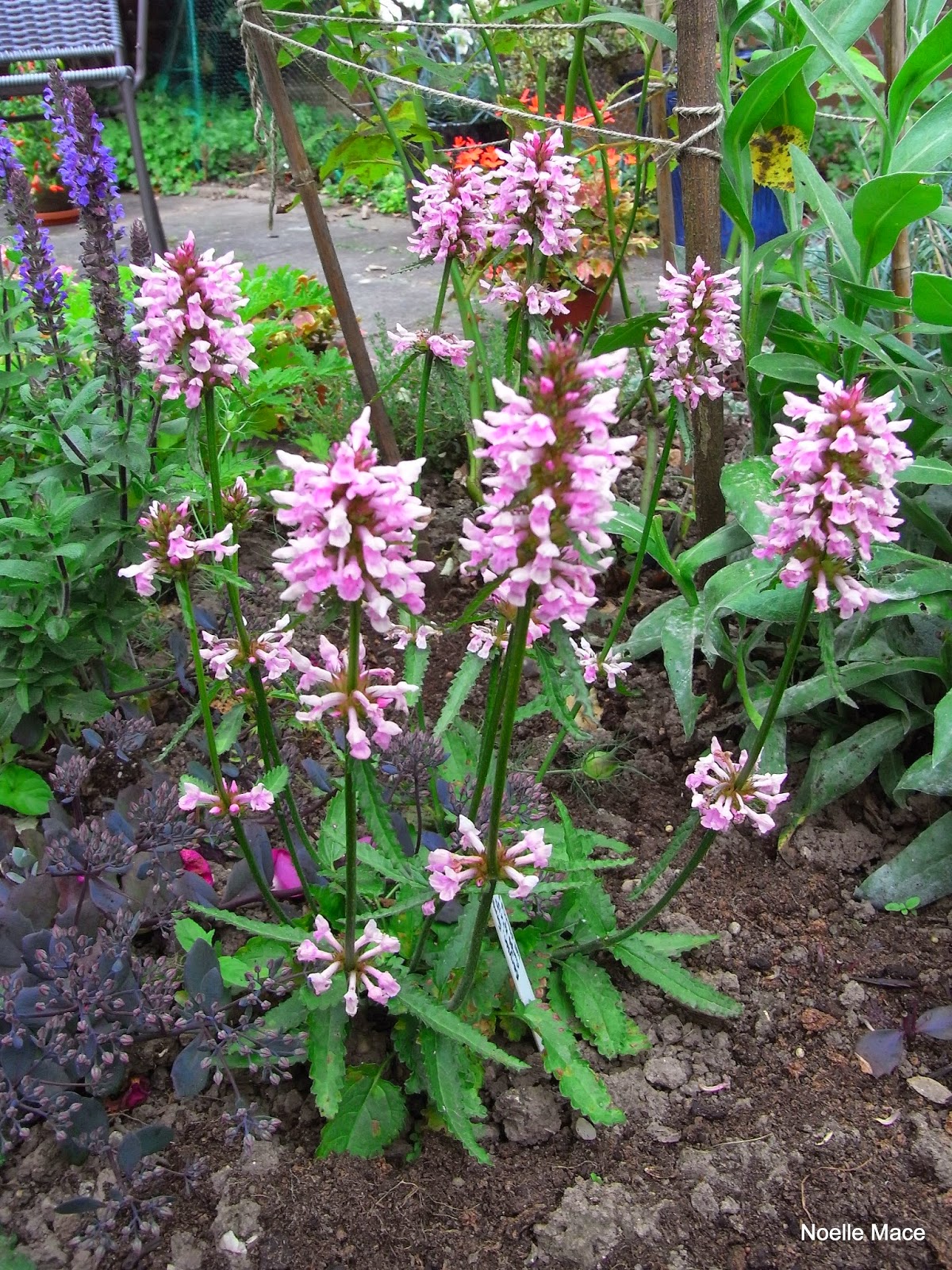 Close by another pink flower is flourishing in the heat: Achillea Lilac Beauty.  Again I bought just one plant last year, but will be sure to divide this up and have more repeats throughout the border. 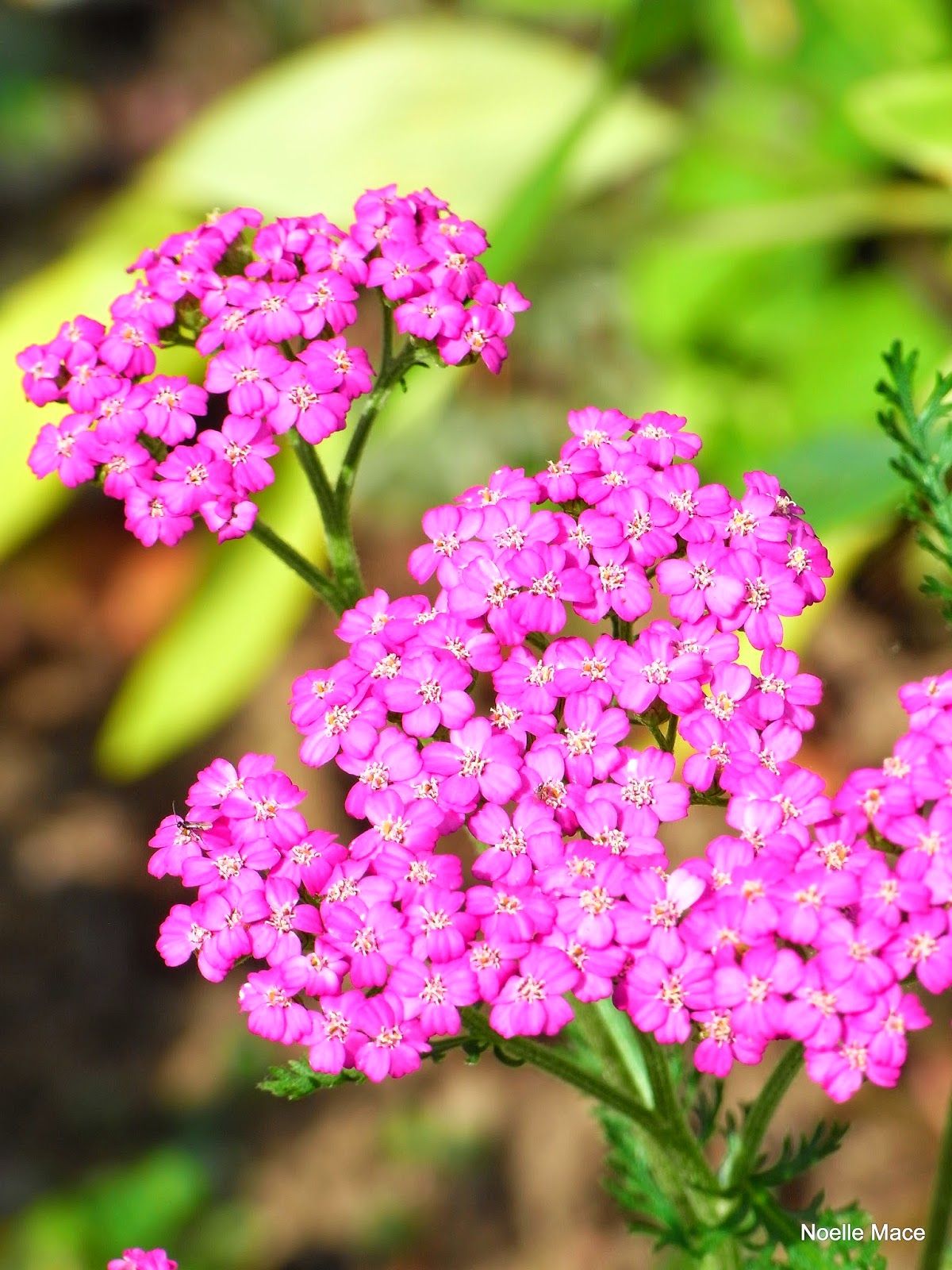 One plant which I have had for many years, and which I think is so very useful as it can be planted at the front of the border, with pretty leaves from early spring, and now at this time sturdy but still delicate flower spikes, and later the seed heads covered with frosts seem to glow in low winter light.  Although Astilbes generally prefer damp conditions, here they are getting a good baking.  But we do have a heavy clay soil.  This dwarf chinese astilbe:  Astilbe Chinensis Pumila is one that I get down to admire...and cut to use with a mixture of other flowers and foliage for my posies indoors. 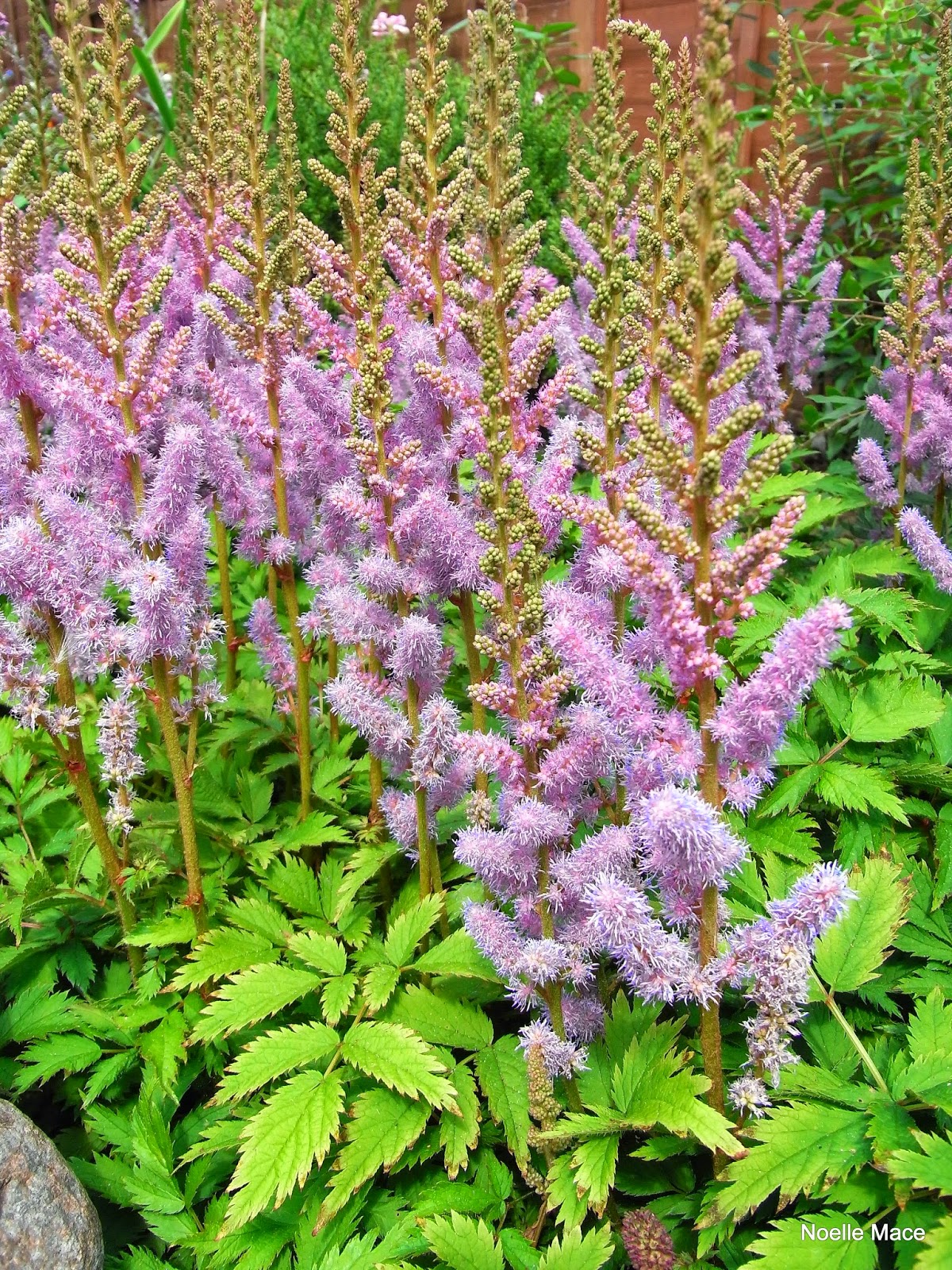 Another plant which ought to be in the soil, but which I potted up into a larger pot a few weeks ago, is doing well:  Leycesteria Formosa Golden Lantern.  I used to have a good clump of the green one in our last garden, and our bantums used to love the berries and Jet use to manage to fly up and bring branches down, whilst the plumper bantams used to peck at the berries.  They used to do this with the grapes too!  This and several other shrubs including Gerturde Jekyll has been used by leaf cutting bees.  A couple of weeks ago I watched a bee flying with a large piece, but did not manage to find where it went to! 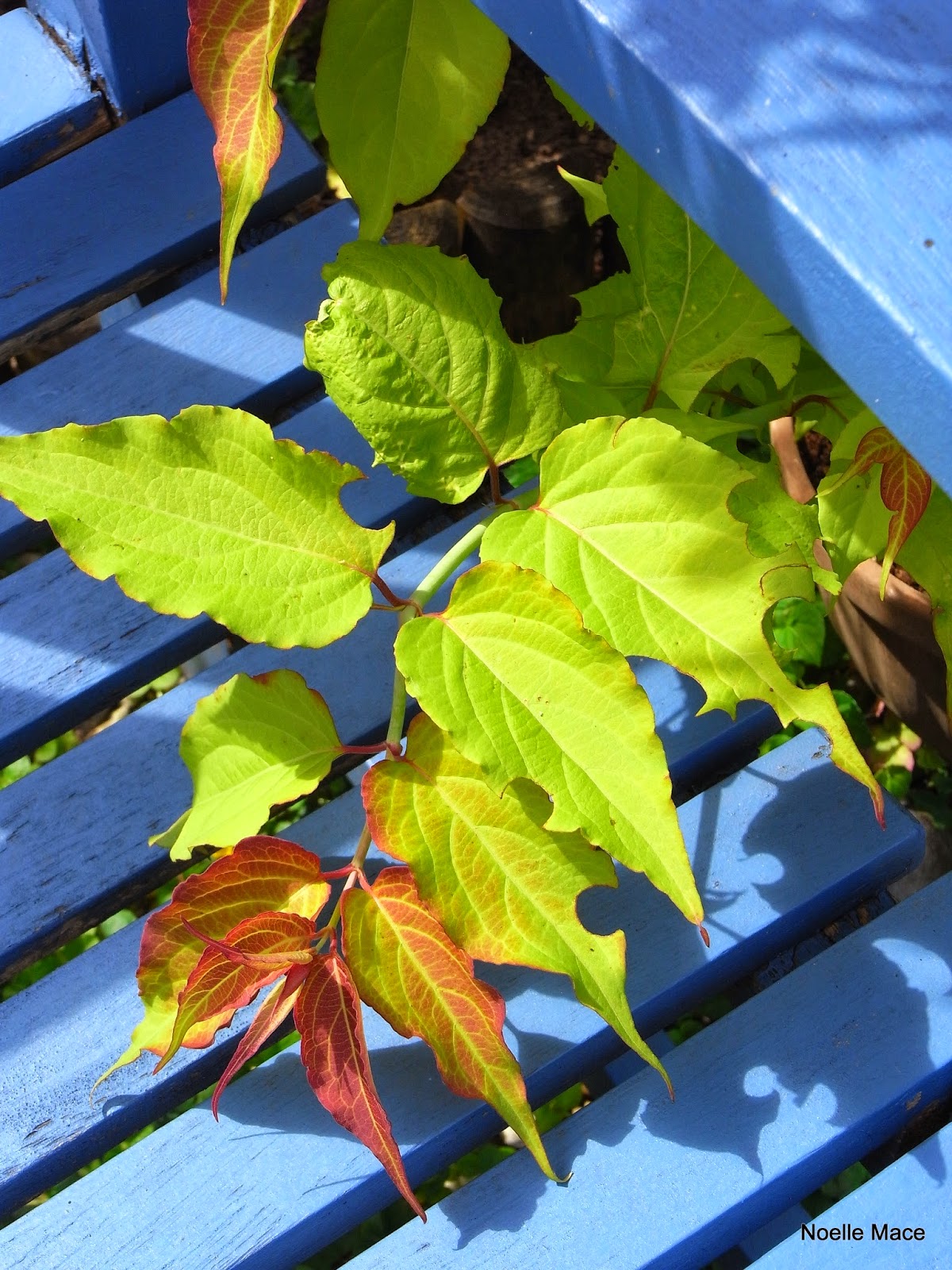 The agapanthus, well the blue one is flowering, and the white one is still in tight bud 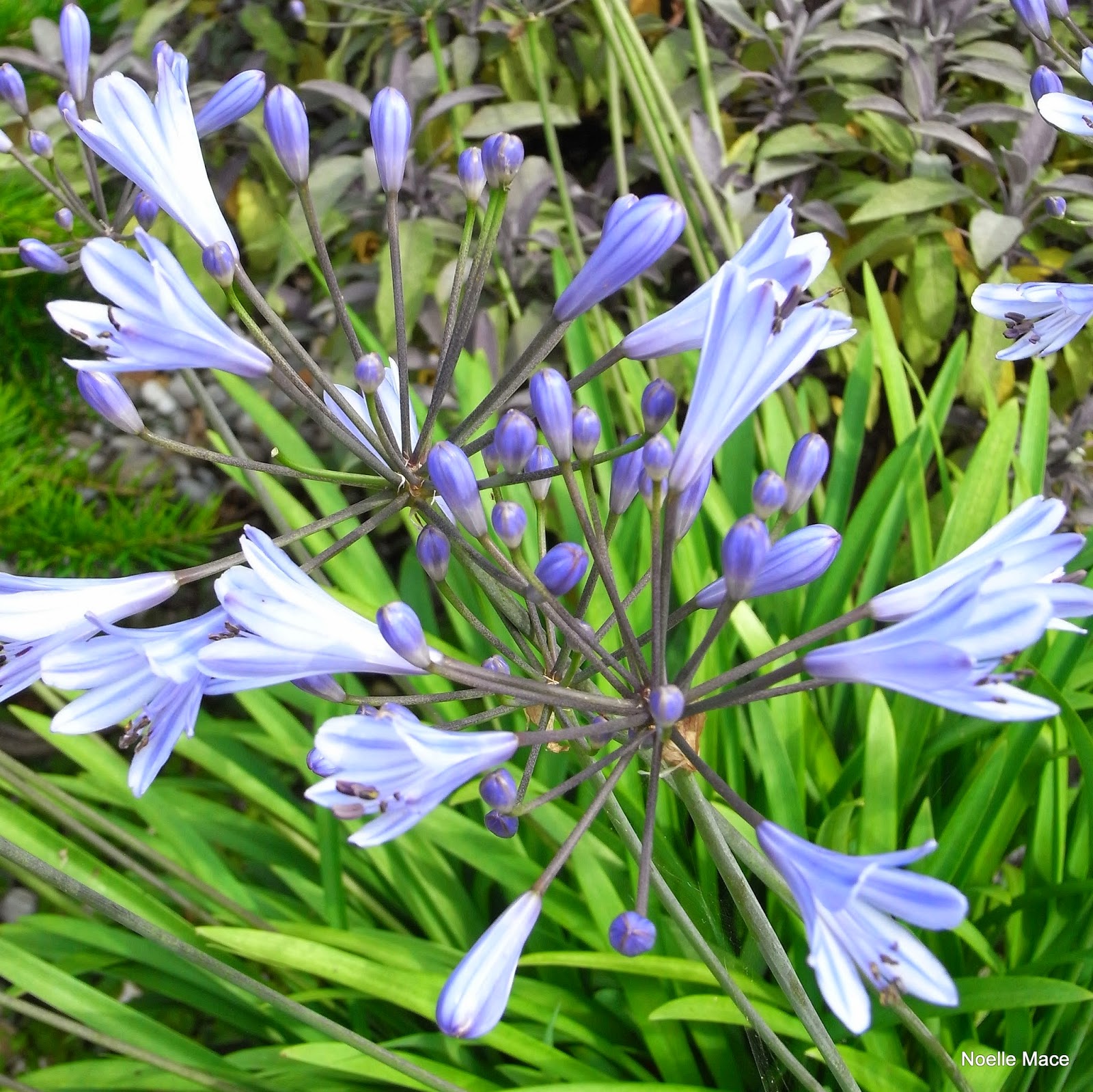 and under the purple acer I found the first of the cyclamen poking up, quite early this year...maybe some will be falling down the large cracks! 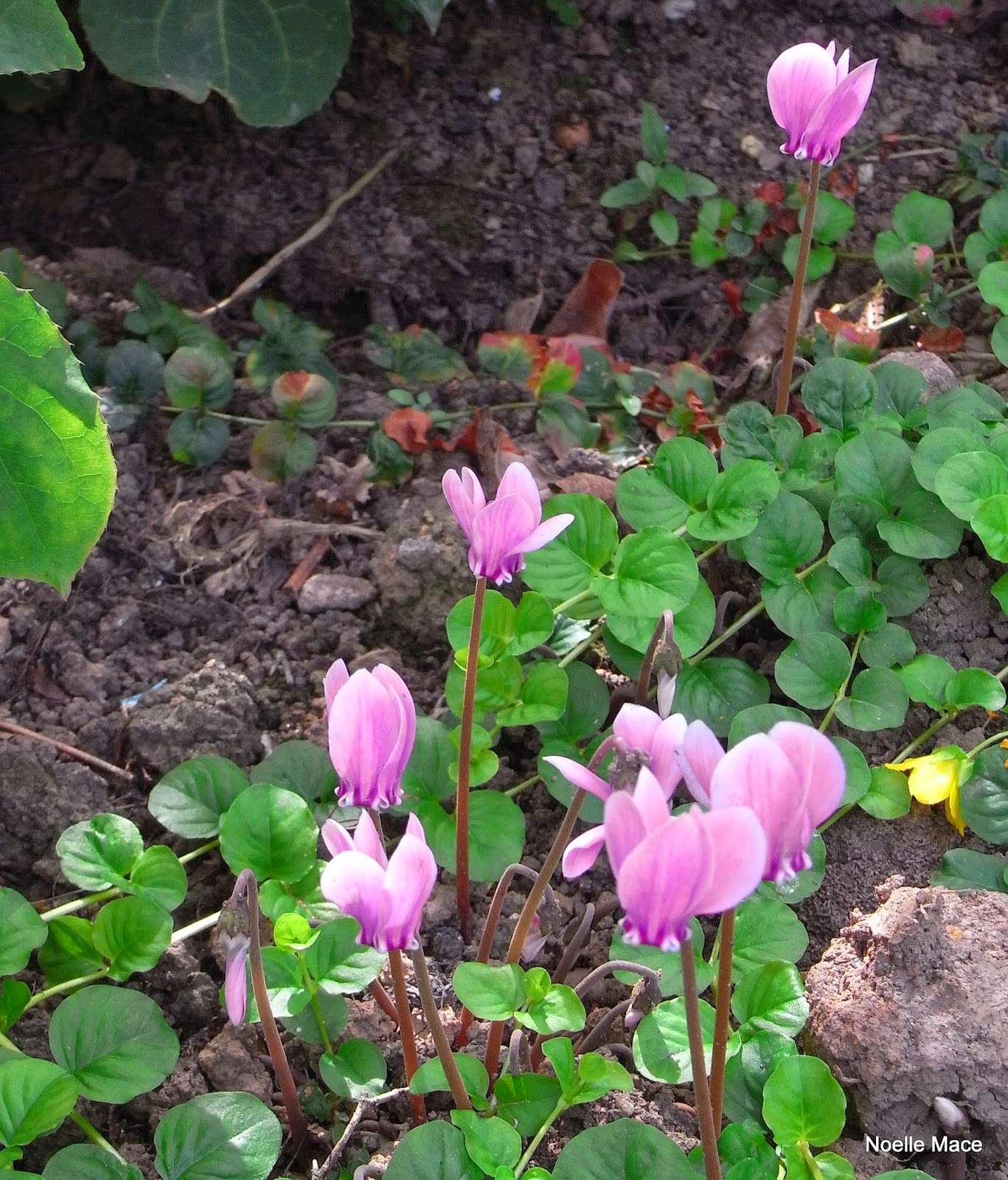 I normally keep my geraniums in pots, but this year put a few into the border.  My camera seems to cry shy of showing just how vivid these blooms are..I'm not sure of the name, which I have lost, of this one which I bought as a cutting a couple of years ago from one of the many 'Open Gardens' which we visit. 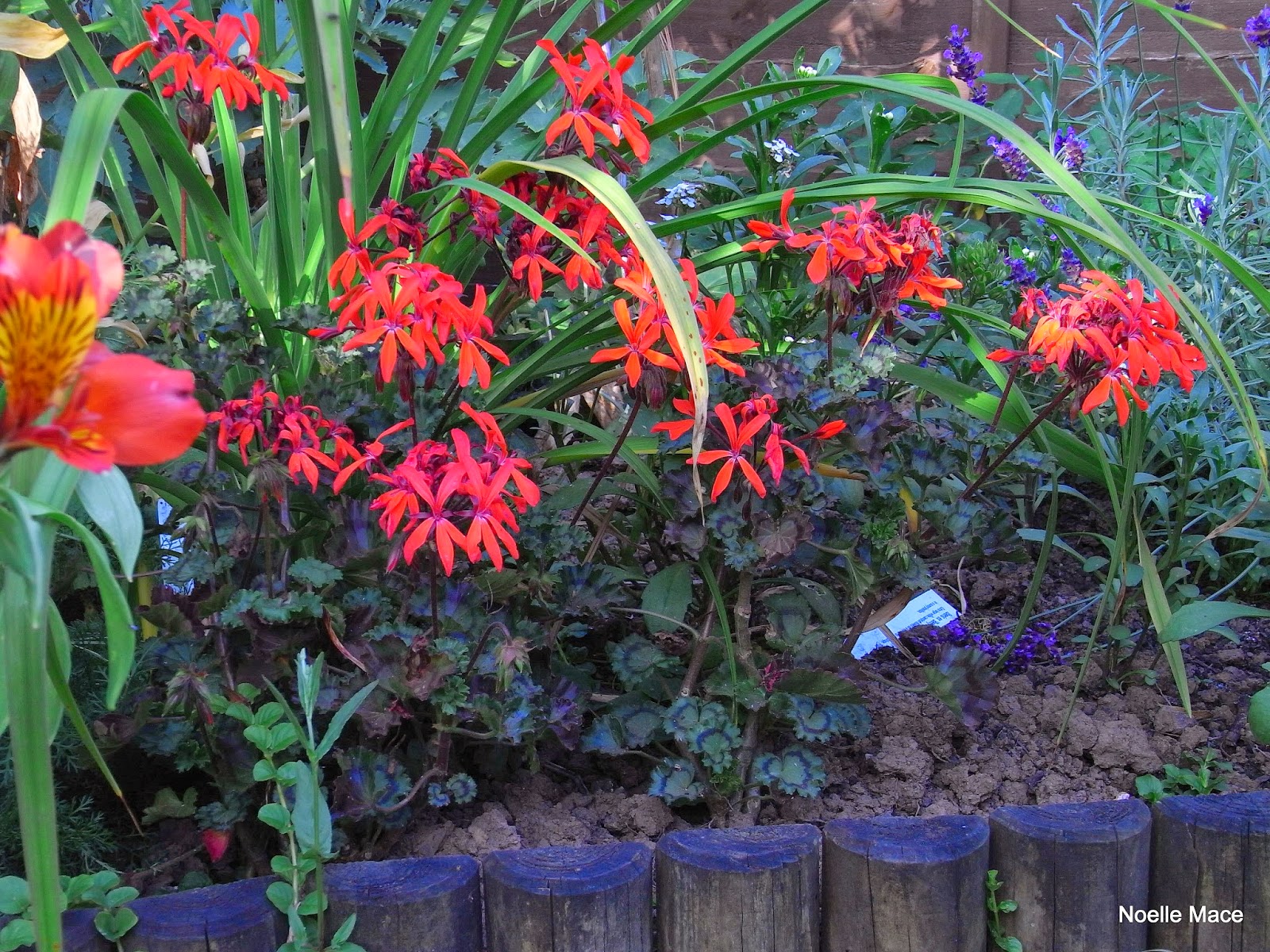 Bringing this picture up reminds of some of the plants which I shall be getting rid of, because they just do not perform and one of them is the day lily behind the geranium..it has never flowered in its three years there, and another on still with full sun, which is too much beloved of slugs! 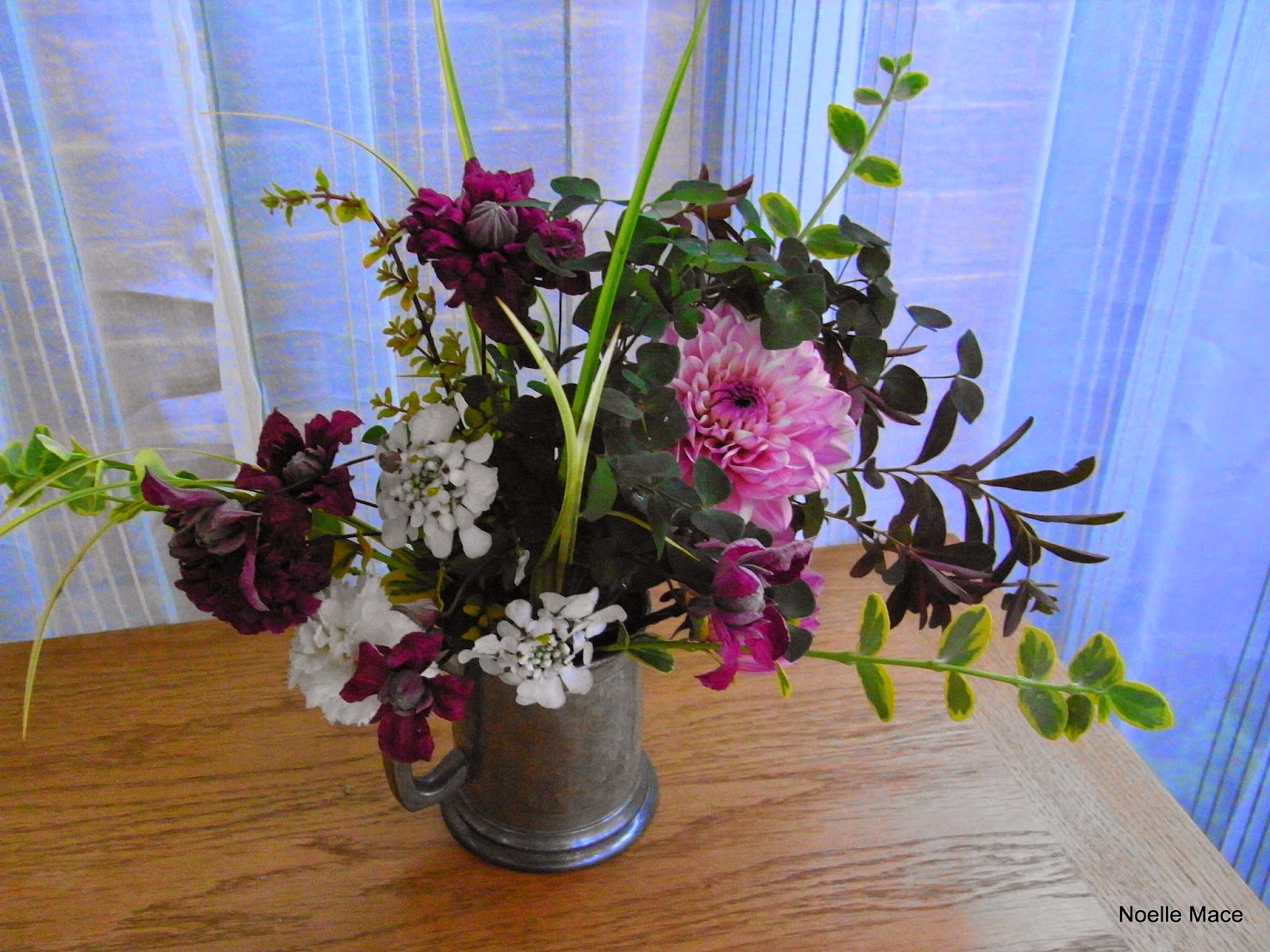