Even before I bought The Book of Buns, Friday was often Bun Baking day.  This Friday, I'm going along with the choice from the Facebook Group for Mid August.  These Chorek are sweet buns and are made by the Armenians as a celebration bake at Easter.  It can come in various shapes large or small but today I have copied the snail shape in the photograph of the book.

What I like about buns is that you can freeze most for later, and they are in effect in a time lock safe out of temptation's way.  If you want one, you have to plan for it, defrost one, and or give it a blast in the oven!  Mr S and I having been carefully managing our food intake, and we are slowly regaining our slyph like former shapes!  Mr S has taken to cycling to work once or twice a week, and this is certainly helping.

With eggs, milk, and butter these deliciously light buns are fragrant with a touch of brandy, home made vanilla essence and mahlab. 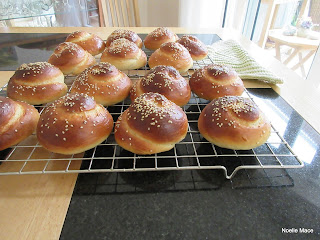 When I was making the Cherry Preserve I added some of the cherry stone kernels, so I think if these needed a little preserve on the side, they would partner well.  By coincidence Roz, from whose garden I picked the cherries, called last night and has invited me to raid the last of the blackcurrants in her garden, so I shall take her one to have with a cup of tea while she sits on her garden bench and watches me.