Every year since we moved up to the Midlands, we have visited this show in the adjoining village.  It is very small, not commercial, more like a party for the village and surrounding areas.  We particularly like it because of the wonderful fruit, vegetables, flowers including Dahlias which are really magnificent.  I also love that Mark a local gardening enthusiast has a plant stall, and I spent very nearly all my week's pocket money on four beautifully grown plants.

Last year when I was speaking to the Show Secretary, she suggested that I entered, as it was open to people from the surrounding areas.  With a stem from my Munstead Wood rose tree, from which I had to cup three side buds, because it was 'One Rose', I won third prize.  All the other blooms were Hybrid Teas. 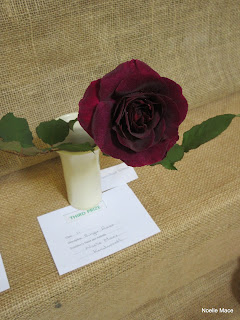 A bunch of Astilbe Chinensis won second prize.  My Wild Plum Jam won first prize, but I was disappointed that my courgette chutney was not even placed.  Penny who was there mentioned that my chutneys were not as sweet as some! 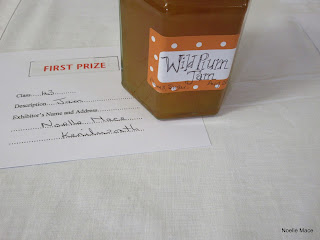 I did not enter my very best pair of socks which are even more complicated, but almost look as if they are machine knit.  This was just one of the pairs in my new sock stash.   I was particularly chuffed with the judge's comments, but modesty prevents me from repeating them! 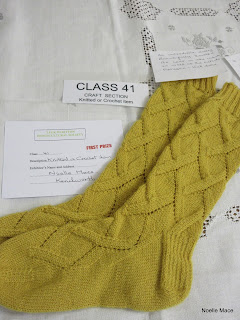 Last year I sowed a few seeds from my Chilli Plant that was into its third year last Autumn, and it seemed just right to enter it now that it has grown into a sizeable plant, and here it is again with some lovely comments from the judge.  The Mother Plant was consigned to the bin as soon as this one looked like it would run.  With very little room on the only sunny windowsill during the winter one plant is more than sufficient for my needs, and I always have spare chillies to give away. 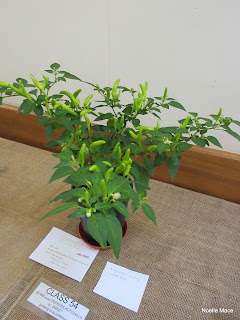 At the end of the show items are auctioned off if they are left.  As I just have one chilli plant I was not leaving that or the socks.  However I just had to buy back my own preserves as it was towards the end of the show that these items were being auctioned off, and the price was less than the price of the empty jar!  I bought some nice Dahlias as I remembered that my friend Kay's father was famous for growing these, and indeed she was almost in tears when I turned up at her door with them.  I also got a bunch for Dawn next door who had just returned from hospital after an operation.  I bid for these at the start of the Show and I was pleased to give a good price which all helps to support the local Village Hall.  I spent my winnings and more at the Auction!

I loved the various entries by Children particularly the carved vegetables, and gardens in a tray.  Of course, the tea and cake was fabulous, and it was nice that Penny turned up, and joined me at the outside tables.  It was really warm and sunny and we were lucky that we were in the shade.
Posted by Stasher at 20:32