I had a call minutes of each other last week from cousins Timmy and Jane telling me that Aunty Prue had died.  When I was young I came to stay in England and Aunty Prue took me in.  For eighteen months or so she was as a mother to me, and Timmy and Jane brother and sister.  Sadly I only visited a few times in recent years, but each month or so we would have a long call.  Aunt Prue had a wonderful sense of humour, and I could not put the phone down but think that all was well with the world.  She never spoke of anything which was worrying her, was there anything?  Always positive and finding fun things to talk about.

In the past years she was as active as ever.  Going out with her group of friends was one of her favourite things to do, she 'managed' the local bus drivers, and even got picked up and dropped off outside her house.  She also, like granny, loved walking, the local birds and flowers.  She kept her home spick and span, and loved her life, in the village where she grew up in.  She enjoyed her garden and her long front garden was full of summer  flowers brightening up the approach to the village.

Having moved away, been a WRAF, worked for the famous Chocolate Company Rowntrees in York,  where Tim was born, then lived in Manchester  where Jane were born, she returned to her home village.

I remember Aunty Prue telling me stories of how she was the best chocolate catcher:  throwing up chocolates and catching them with her mouth. Rowntrees used to send her to boxing and wrestling matches, with ring side seats so that during the intervals the television cameras would focus on her with her box of chocolates in her lap, and have free advertising.  Back in her village she worked as a Dinner Lady at the Primary School, so was known and loved by all the children in the village.  She even had 'her own walnut tree' near the school, where she foraged for nuts each autumn.  After that she worked at a hard job assembling windows and doors in the large local manufacturers Howarth's alongside 'the men', until retirement.  Aunty Prue knew a lot about the history of the family and the Village, and even came out with a great book for Mr S about the railways in the New Holland.

Aunty Prue really cherished her collections of china:  pride and joy being her Royal Albert Old Country Roses China.  She had cups and saucers, plates, tea pot, jugs, plates etc which she had built up over very many years.  So it is in her memory that I post these roses which I picked the day she passed away.  Just incidentally they are almost the same as on the China. 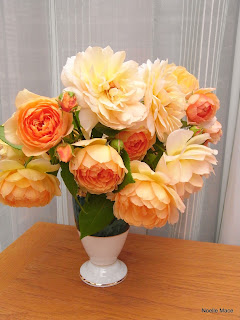 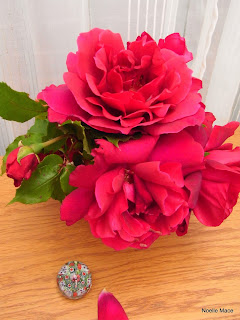 Another collection was that of ceramic and glass hens the ones which split in half.  I think they were popular for keeping eggs in.  Over the years Aunty Prue had been offered perhaps one or two a year as special prizes at the Village Shows, so the collection was being reduced.  A few years back she offered one to me, and I chose a lovely small one which is on my window sill and in which I keep a bulb of garlic, so each time I stand at the kitchen sink, I have a memory of my Aunty Prue.

Like very many people, I am so sad that I no longer have this lovely lady in my life.  She was looked after wonderfully during her last few weeks by Jane and Timmy, and hospital and nurses.  Thanks to a stent was able return home and as it turned out, for just a few days, and was able to drink and eat just a little.  She passed away in her own home on her own terms, no drugs, no painkillers.
Posted by Stasher at 10:51