We needed another loaf today, and fancied one based on the rye mother.  I have made the Durum Rye before last year, just before we moved. 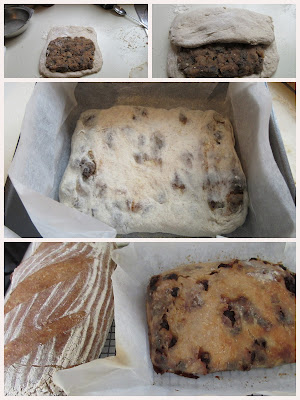 No Durum flour left but used strong bread flour, as suggested by Jane Mason...I scaled up the ingredient to give just over 1Kg dough, but reducing the malt syrup to just a teaspoon and butter to 10g.  I portioned 700g for a long banneton, and kept the remainder to play at making a lardy cake.

When Lizzie was here we bought a small piece of lardy cake, which we sliced up to share...it brought back memories.  I remember my son enjoying visiting the two village bakers after school during the hollow leg years, and delighting in getting his hands on these.  I have just tried to check them out..but the 'village' which we lived in has now been swallowed by Swindon, and there is a Baker's Court and A Baker's Arms Inn...but I find no mention of the Bakers which have long since closed.  Even my little grand daughter has made Lardy Cake for her daddy.  I am ashamed to say that this is the first time I have baked lardy cake.  I had thought them previously too fatty!

Of course the base dough is not the one given in Clive Mellum's book, but as it was the dough of the day, I followed the recipe for the ingredients and the method which I read about for the first time this morning.

With 30 lard for what we will divide into 6 portions...5 grams is less fat than I would spread if I put butter on a slice of bread!  When I started to mix the filling, it was easier to just get in with my warm hand and blend the 100g raisins, with 60 soft brown sugar, 30g lard, and 25g of my finely chopped home made mixed peel, which I keep in the freezer, and 2g of mixed spice.  I shaped this into a block and made the laminations.  The dough went into a paper lined tin which I had spread with a fine layer of lard and an extra fine sprinkle of brown sugar.  When it came out of the oven, I left it a few minutes, until the juices had been reabsorbed into the dough, then turned it out to continue to cool on a rack.