People who know me well will understand why I chose this apple to grow, and believe me it has proved right on so many levels.  It will be one of my little 'projects' over the years to come.

They say never go shopping when you are hungry, I was 'hungry' or rather lacking ( I was missing our garden terribly), with no trees, very few shrubs and smaller area too in this garden, I was in mourning for the plants I had left behind.

We visited Glastonbury for the first time when we first moved to Somerset, it was just during the weeks before Christmas 2016, we still hadn't unpacked and the gardening tools were somewhere behind packing cases in the garage.

I loved the small market we came across based around Glastonbury Cross, and I was naturally drawn to a stall with plants.  It was a young gardener tending the stall.  It was cold, her hands were cold, but she lovingly tended her young apple and fruit trees, with their root ball covered in sacking.  I had not intended buying an apple tree...the garden was not ready at all.  I looked over the saplings, examining the names...and should one buy a plant based on only its name?  D'arcy Spice...both names significant to me....I just had to have this apple. I had never heard of its name, it was an old variety etc etc...

It had to come home.  Mr S was miffed.  I explained that I was buying it with 'my money' and that it was a My Christmas Present to Myself.  Although not a gardener he knew we should prepare, and had also thought I would grow the apple Scrumptious.  We had a tree in our previous garden bought at An Apple Day at the Hill Close Gardens in Warwick.  Its a sweet and delicious apple cropping very early in the season.

Back to D'Arcy Spice: a patch was dug, the one year old bare-rooted tree planted, had been standing in the lee of the house for a few days, its roots cocooned in compost which had been pre-innoculated with mycorrhizal fungi, was ceremoniously planted.  I had decided to put no stake as the garden is sheltered, and it was very small...just one stem, a Maiden Tree.  It grew slowly during 2017 and I was beginning to wonder at my folly.

This spring 2018, there were flowers, and whether I was right or not, I decided to remove all the blossoms as soon as the petals had fallen, leaving only two fruit to swell.  Its only during the last two months that I have got round to learning more about this cultivar.

I have read that it is an old variety, it is slow growing, it is a late cropper, it is rare....it is dual purpose, has spicy flavours...oh dear I ought not to have picked the first fruit so early.  But I did, as it looked so large for the little tree, and I decided to leave the smaller one.  I read that it should be stored, and for a small crop, well two counts as a small crop, a fridge would do.  The first fruit has been sitting in the fridge since the start of October. 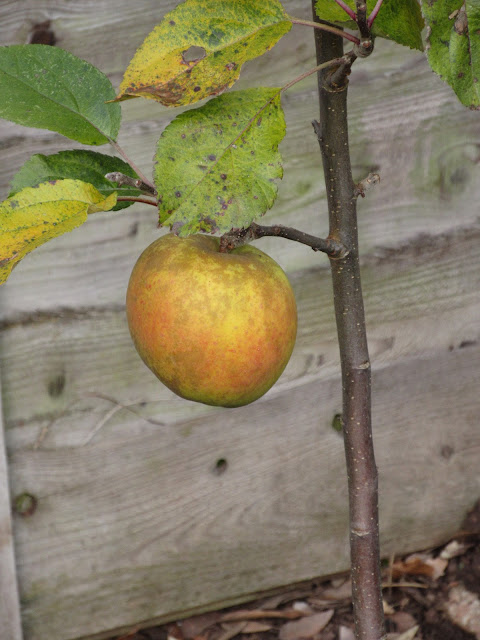 Today mid November with the low sun, the leaves on the apple tree are turning a golden yellow, and even the fruit with its very short stem is flushed with colour, unlike the first one which was a matt green with patches of roughness not unlike a russet.  I have decided to pick this second and last apple and store it ready for our Christmas Day Treat!  Next year, hopefully I shall allow just four or five to develop, and harvest these and test which are best.

The first fruit was 155g, the second 195g, therefore not accounting that it was the smaller of the two, it has gained at least 25% in weight over six weeks.  It was still very firmly attached to the tree and I wonder whether it could have been left even longer.

It is only today when looking for dates of planting, that I came across the card given to me by the grower, and that I have learnt more about the variety and the wide range of trees grafted and grown by Steepholding.  They grow a variety of Heritage Fruit Trees, grafting and growning them organically:  www.steepholding.wordpress.com

Shame I had not found out these growers earlier, as they do grow Mirabelle de Nancy and would have loved to have bought it from there.  That is the second fruit tree that I had sourced and planted this autumn.

D'Arcy Spice is an old English variety originating in Colchester, Essex in 1785. Staying true to its name it possesses a spicy, nutmeg flavour that sweetens with age. It is an excellent heritage apple for eating and juicing and will store well into the following Spring. The tree itself is tough and hardy and though fairly slow growing, it will often do well in less than favourable conditions. It offers good disease resistance too and the apples hang well on the tree, so good for more exposed sites. Walcot Organic Nursery
'D'Arcy Spice' is a light-cropping, late-season, dessert apple requiring lots of autumn sunshine to develop its sweet, spicy flavour. It is in pollination group 4, partially tip-bearing and erratic to crop. The fruit is green, flushed with red, sometimes purple, and with extensive, fine russetting.  RHS

Labels: Garden, Plants, Presents to myself