I'm putting the update at the top of the post, but leaving the rest intact.  Through leaving a card at the Deli, the grower has been in touch.  She grows the pumkins in her own garden along with a number of other pumpkins.  She bought the seed for Marina di Chioggia which is an old variety, and was grown along with Uchiki Kuri, and Crown Prince, so I am afraid that the seed cannot be guaranteed.


This morning we were out of the door and walking briskly to Town ready for our early checkup at the Dentist.  I was rushed out by Mr S, so I blame the early start for my forgetting to take any shopping bags.

After receiving the all clear by the dentist, we sauntered round Wells, popping in and out of shops, primarily looking for new leather gloves for me, hopefully in a nice shade: pumpkin or orange, or maybe even a golden yellow.  The only ladies leather gloves we came across were black!

Bear with me:  the finding of the object is part of the pleasure of my day.  Along our way home, we found two clocks, and bought them...we have been looking for some for over a year!  Mr S found just the right bolt for his lathe, from the cycle shop, then I wanted to go to a kitchen shop to get a flexible spatula which was just one piece, with no joints...and found it in a local shop, together with a new spatula to replace the one we have had for about twenty years!  Both in a lovely green colour too.

Our outing was proving to be very productive...and I have been having a little craving for something sweet..chocolates are out of the question, I daren't even have one of chocolate bats.  One of my favourite treats is really good Turkish Delight, and I felt it was worth trying the deli to see if they had Pistachio Turkish Delight.  I have had two lots in the last year from the Village Shop in Wedmore, which does stock some delicious things.

Queen Street Deli came up Trumps!  I was triumphant, and with my Pistachio Turkish Delight paid for, turning to leave the shop,  my eye was caught by the window display.  A trio of different pumpkins were in the window with a particular magnificent pumpkin which I didn't recognize.....they had been brought in by a local gardener.  I had never seen the like of the one that caught my attention.  Its variety was unknown to the Deli owner, but it was a culinary variety.  In any case, without anything to carry the said pumpkin in, which was over 8Kg, it had to stay in the shop.  I was shown a few other smaller pumpkins or squahes and had thought they may be 'under developped' Turks Turbans.  I had grown some lovely specimens several years ago when I had an allotment.  However having trawled various specialist pumpkin seed merchants, and realising the grower may be into some 'exclusive' varieities, they may be Burgess Vine Buttercup.  I shall be at the Deli again tomorrow!

Having arrived home, on went the PC, and I started to trawl the internet for pictures of  dark green pumpkins with knobbly skin, and came up with Ironbark Pumpkin.  It is a heritage pumpkin from Australia.  I knew I had to go back and get it...my only thoughts were the dismay I would feel had it been bought by someone else.

This time we took the car into Wells...and I was triumphant...Mr S did the gallant thing and carried it to the car. 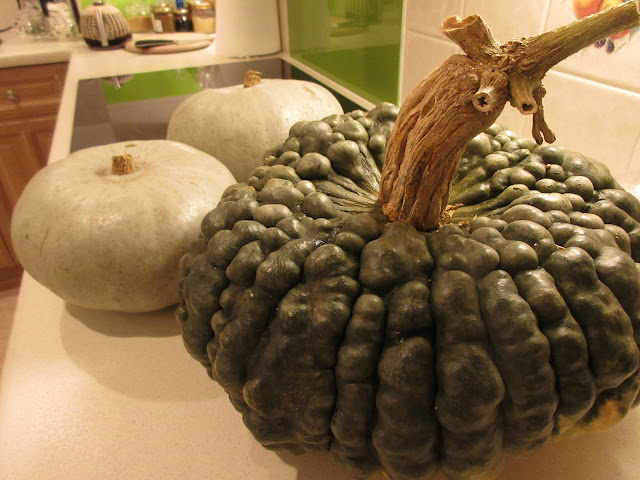 The two other pumpkins in the picture are Crown Princes, which I have had for a few weeks...but their noses have definitely been put out of joint by this beautiful Ironbark. 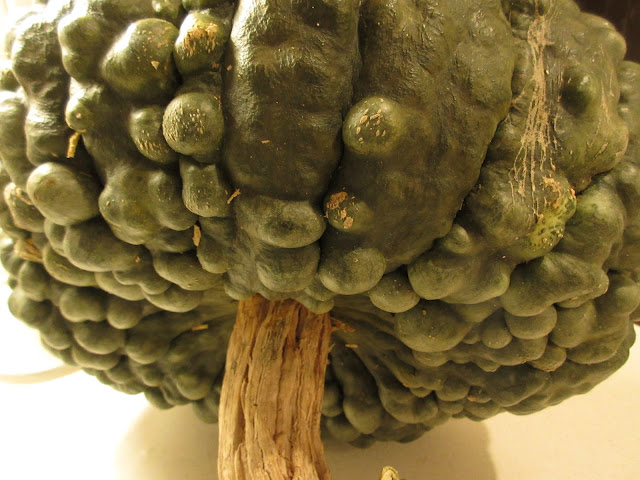 Today the 'carved pumpkin', set out to advertise the presence of baked goodies, having been baked, is already being made into sourdough dough loaves.  I am going to have such a good time finding and making Pumpkin dishes.

If anyone has grown this one, and visits this site, or has cooked  Ironbark Pumpkin  I shall be delighted to hear your experiences.
Posted by Stasher at 19:45

Labels: Feeling pleased with myself