Not in a Vase on Monday

I've spent almost all week thinking about it, even when I was lying on my side, on bare concrete floors, painting skirting boards.  It did make the painting more interesting!

I chickened out, I felt I could not take the stress.  The armistice, news of loss of so many lives lost in the fires in California, the get together to 'celebrate the life' of a friend last week, had all left me in a pensive and sad mood.  Additionally I fell over whilst trying to carry a very large and heavy ceramic plant pot filled with succulents back into the conservatory, insult was added to injury in that most of the contents fell on top of me.  I really thought I had broken something at first...thankfully pride, and  soft tissue bruises and broken plants were the only injuries.

Today I plucked up courage, and took a peek at Cathy's post.....and over the next few days when I feel like some 'shed time', I'll explore others' posts.

This is not Monday, so if I were to post a vase today it would be 'A Not on Monday Vase'.  I have been known in the past to post late, and was accepted and forgiven by Cathy!

I had thought of not using a vase but something like a jug, or a bowl, or floating blossoms in a dish, or even lying down material on the table, similar to the Mandalas that Wild Daffodils makes..  I have been looking at collected acorns arranged around a circular slate in the middle of our table, which have been building up over the autumn, along with other seed pods. 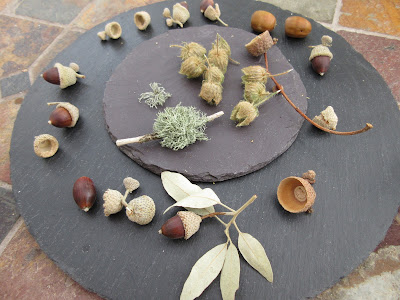 Some dried flowers on the table besides a vase came into my mind as a possibility, whilst I was writing a birthday card for my friend Marie-Claire.  Guess what: I remembered that once a friend had enclosed lots of little 50s in a birthday card, and it was a few months before the very last one was found.  Several birthdays have passed since then!  Instead of numbers I added some lovely coloured dried 'flowers' from the Hydrangea Paniculata Vanille Fraise in the envelope.  So the challenge inspired me to do something I would never have thought of. 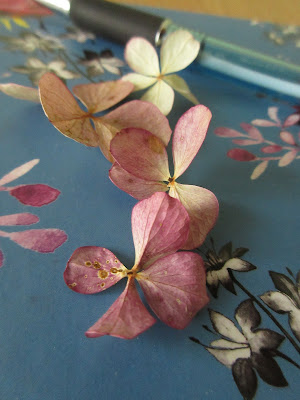 Even with the frosts round about, the back garden is still showing no sign of damage, and I had been thinking of the possibility of putting some of the Nasturtiums in a a vase and calling the post:  Not in a Vase on Monday Again?  Mainly because that would have been boring as I have already had recourse to using them more than once before this year.  Here is a picture of the bottom of the stone wall taken today, best left for the last of the season's bees and insects. 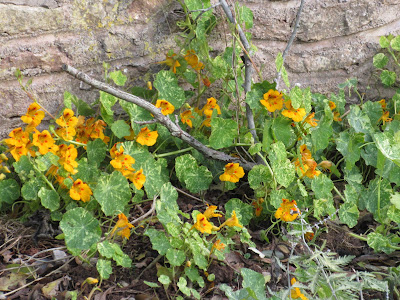 The joining in of this meme has proved an interesting way to share and learn about each others' gardens, and also note the effect of the seasons on our gardens, whether it is snowdrifts in the US or searing heat and drought in South Africa.  This meme has widened my horizons.

What is new for this week is a peek at the Lysimachia candela plant which is just starting to display its autumn colours.  I am not cutting this to put in a vase, as it was just planted a few months ago, and it is probably best left to 'feed' the plant ready for a stronger plant next year.  This is Not in a Vase this Monday. 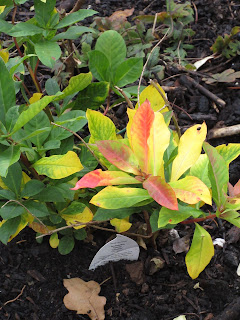 I had been not particularly impressed by its blooms, which were somewhat disappointing compared to Lysimachia Clethroides which I grew in my previous garden.  However if the rest of the plant colours up like this stem, it will have redeemed itself.  For cut flowers I am still on the look out for Lysimachia Clethroides.  I joined Cathy for the first time over three years ago, and on the way have made some lovely friends, and enjoyed the beauty of their arrangements.

Just as a little encore...a very funny and entertaining read: Rhapsody in Green by Charlotte Mendelson 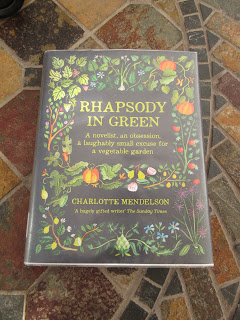