In a Vase on Monday - Party Games

Firstly:  here is my vase this Monday.  I watched the strong winds and rains bash the garden, and like Cathy last week, I decided to go out and cut all the flowers off my two new rose bushes during a lull in the rain Sunday morning.  I have had so many blooms this autumn, there were just a few blooms left this month, and I had been hoping to keep them a little longer.

This week again Cathy too has picked roses from a December garden and celebrates 'getting to know your garden'.  With our paths now complete and being free draining I can venture out between showers and being a small garden and see almost to every tiny bit of the garden.  An alternative is of course to check out via Cathy's blog the lovely blooms and foliage from other contributors from around the World. 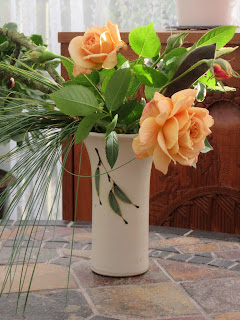 The foliage is left over from a party game.....

It was Henton and District  Horticultural Club's Christmas Party last Wednesday.  During a committee meeting a few months back when we were discussing ideas for the party, I put forward the idea of a game which I had first experienced a few years ago at the Warwick Tree Warden's party.  There we had far more twigs of trees to identify in the ready made arrangement.

With all the weeks of In a Vase on Monday under my belt, I worked out a slightly different format, and the practicalities were discussed and fine tuned over the last couple of months during committee meetings.

Sally Gregson and I walked round her winter garden , trying out material and by the time we arrived at the potting shed I had a rather lovely arrangement of items in my hand.  We took these to the committee meeting to which all of us had brought interesting foliage and berries, if we could spare about ten to allow for all the tables to have one stem. My contribution was variegated Ivy.  I thought it would be a good idea to whittle down the numbers to the best twelve representing the 12 days of Christmas. 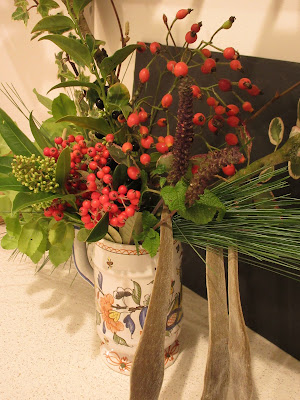 Here are just the left overs crammed into the handiest pot on my kitchen counter.

We decided to decorate the tables in the Hall with the material loose laid...of course our members had no idea that we were have this game, but in the meantime admired the novel 'not in a vase' decorations which even in this state would have been quite lovely as they were,  for any party or meal.  We did give out the warning of no eating of berries, and please wash hands before supper!

With one of each of the items, the table as a whole were asked to make up an arrangement...ribbon,  raffia, and tall empty jam jar provided. (Hartleys Jam jars saved over from the Harvest Festival Party arrangements).  The second part of the game was for the table, working as a team, to identify and  name the items.......They all laughed when I said that more than four or five latin names meant they we would have some candidates to act as substitute speakers in the situation that one of ours doesn't turn up or is late.

The following day a couple of members living locally took all the arrangements to Wells Nursing Home in the Village.  Another excellent idea which came about as a result of pooling ideas during our committee meeting.

Labels: Friends, Grace, In a Vase on Monday, Roses