Pan de Camote and beyond

Pan de Camote in Jane Mason's Book of Buns is one the recipes for which alone I would say the Book is worth buying.  There are many others recipes of that caliber too, and I have baked nearly all of them.    When I baked and posted on my first bake of Pan de Camote,   I put up a picture and a short piece about the flavour.  If you want the whole recipe it already is out there and is just as per the book.

Recently one of the 'friends' of the Facebook Page Perfecting Sourdough, having now finished bakes from that book, discovered that there is also a group for The Book of Buns, and has joined. There again we have gone through all the recipes, but that would be no reason to join if you have recently acquired a copy of The Book of Buns.

Since 2014, I have revisited this recipe, changing the flour for instance in October 2016 a combination of Einkorn and stoneground white flour, before that in January 2016 a mixture of millet, maize, spelt and white wheat, it has become my sweet potato and whatever ends of bags of flour I want to use bun!  I usually write a note on the recipe of how I adapted it.

This time, I used roasted some sweet potato with fennel seed, and having weighed it just prorated everything else, and used a combination of whole wheat, whole spelt, a little dark rye and white wheat...you get it, all the ends of bags of flour.  I love sweet potato and tend to roast a whole kilo and use it several ways...hot with our meal, cold  a day later with salad, and of course in in Pan de Camote 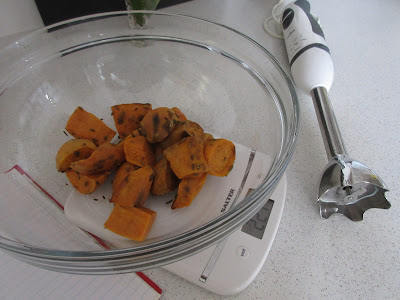 After bulk fermentation, approximately half was made into buns for breakfast with the addition of raisins that had been soaking in Marsala...I have a kilner jar of steeping dried fruit ready for such eventualiites!  Try them in a home made rice pudding!

I was in a bit of a creative mood and wanted to make some savoury buns too.  Having flipped through the book, and catching sight of Bastounakia, came up with the idea of the incorporation of a few savoury bits and pieces, and the rest was a question of playing! 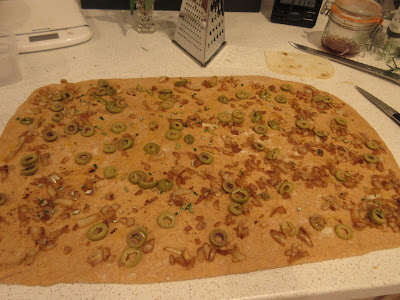 On went sliced green olives, fried red onion, finely chopped rosemary from the garden, and then a sprinkling of grated Pecorina Romano... 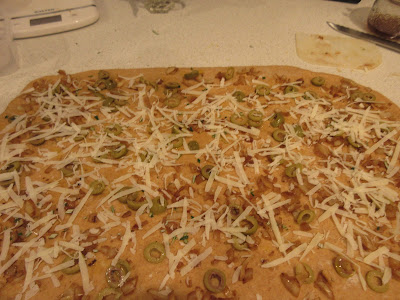 Folding over  like paper ready to go in an envelope 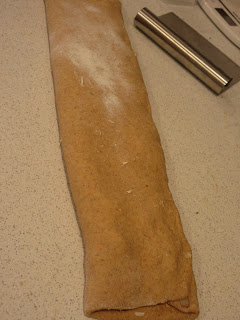 Then cutting along in fine fingers 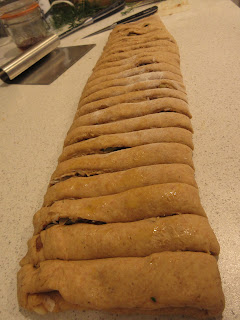 The twisting came about because the slices were too thin to move whilst maintaining their stacked format...well necessity was the mother of invention here...Well brushed a couple of times with beaten egg, and a sprinkling of Pecorino and little fronds of purple leaved fennel from the garden...et voila.  All the (remaining) bread fingers are now frozen, and ready for our gardening club Christmas Party bring and share supper. 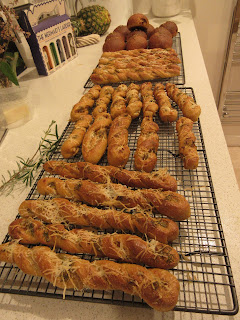 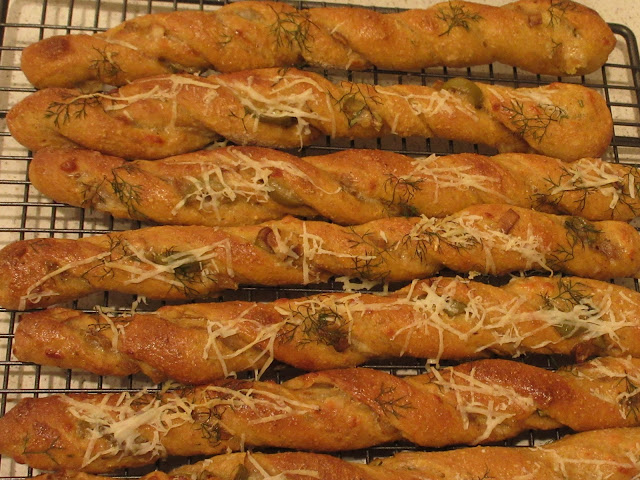 Just how many variations of these can be made and will be by me at the very least, is just a question of imagination!  Next time blue goat's cheese and walnuts for sure.  We did have some with our Cauliflower Cheese Supper...

Labels: Baking, The book of buns by Jane Mason