After a long drive, we arrived at Ashwood Nurseries.   John and Sally had known each other from their encounters in the plant nursery world and spent time catching up with their current projects.  Sally was bringing some of her Hydrangeas in which she specialises for John, and had also booked us up for the Hellebore talk in the afternoon.

From his kitchen window as we sat around the table, my eyes were continually taken through the windows to John's gardens beyond to a dell of spring flowers where  Hamamelis,  Intermedia Pallida being John's favourtie, are underplanted with spring bulbs which promise to give weeks of delight.  Beyond and by the drive is a (painfully) cloud pruned hedge of small dense leaved holly. It is joy to see, and I am sure much PPE is required to get the job done!

Later when we started our tour, John first led us through that very area and I began to understand as he explained, the great benefit to be gained from careful pruning of shrubs to give an understory and space between the branches in the canopy. 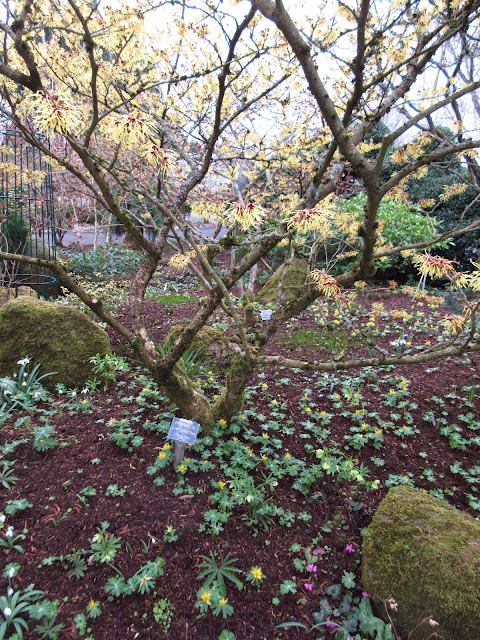 The last time I had visited Ashwood and John's garden it was a little later in early Summer.  This early on the trees were magnificent and again I was much taken with his wide range of conifers.  and being able to see the shape and form he had made with careful pruning.  His silver birch with their jet washed trunks shone out.  John is amazingly generous in sharing his tips. 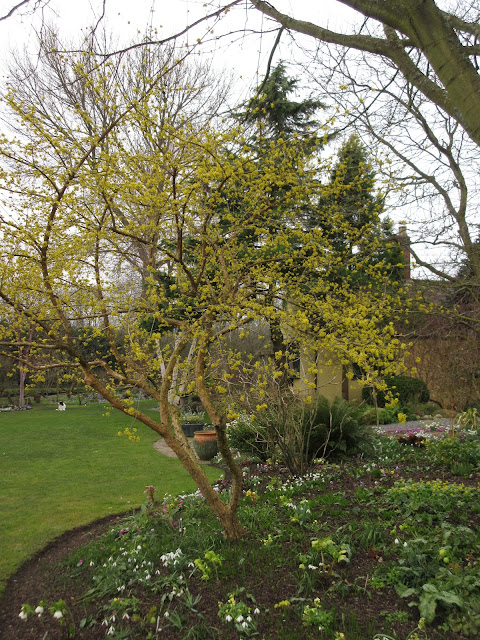 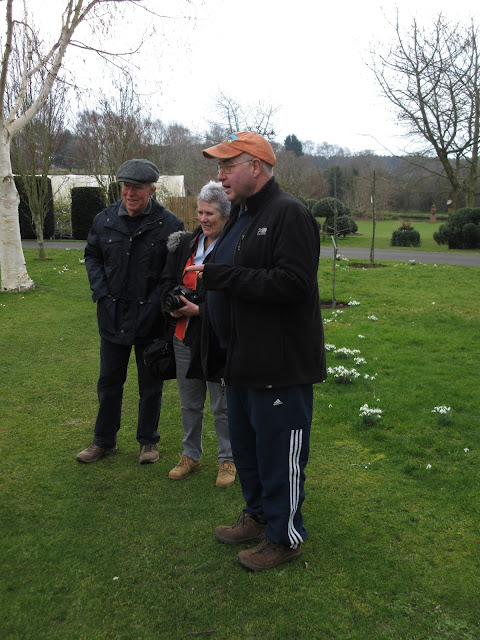 Everything in the garden is in perfect order showcasing John's years of knowledge, plant hunting and dedication to horticulture.

With careful positioning and care in choosing just the right plants, there are tableaux which are inspirational to gardeners whether they have large or small spaces to play with.  I inwardly smiled when John said that some people position plants far too close....I know I do!

One of the most recently planted borders, in this wonderful garden,  had needed one of the large topiaries moved a few metres away...and here is the  new  border is coming to life.  A recently acquired collection of hardy Nerine bowdenii has been planted all along the front of the border.  John assured us that they would be fine even though Ashood is situated in a cold frost pocket.  For now the galanthus, grasses and dogwoods catch the eye.  I shall be keeping up on twitter to see how it evolves throughout the year. 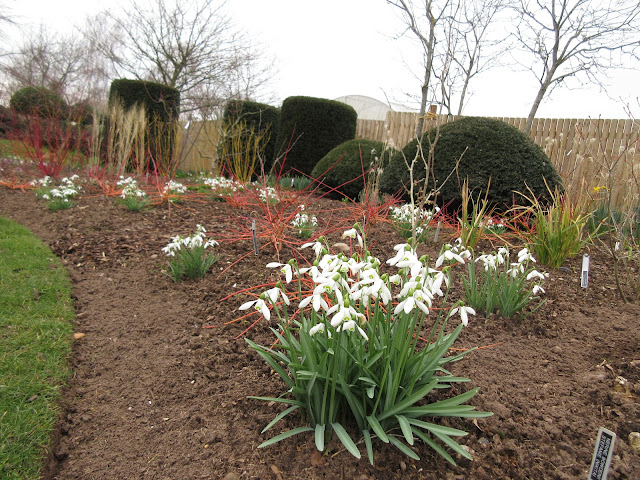 As with many gardens the fun element is often in its sculptures..... 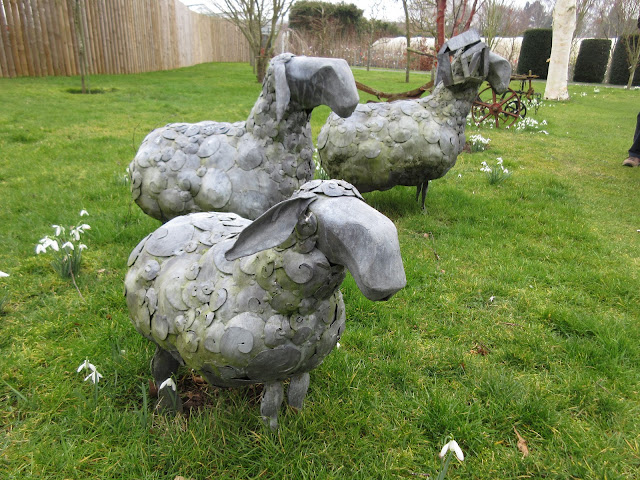 Up by the canal this specimen got us talking.  It is Salix gracilistyla 'Mount Aso'....one I noted for the garden. 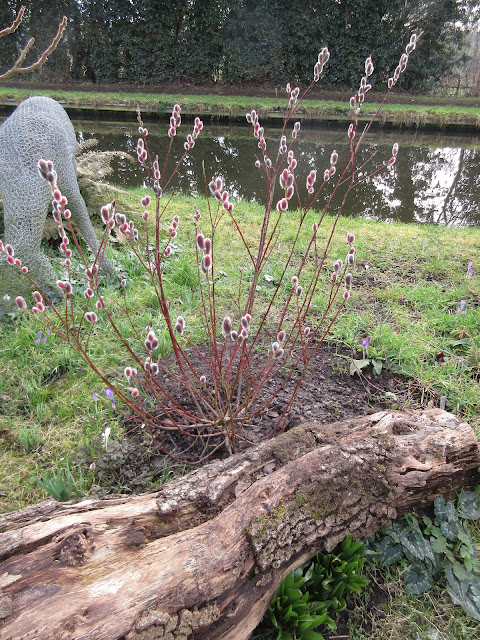 Just a little further along, my eye was first caught by the shrubs.  Again grown in a little differently to the regular coppiced regime which we often apply to the Cornus family.  Here the dogwoods had  shaped to grow horizontally to provide a screen and also provide a place for snowdrops and ferns.  John crouched down to find a label for the bright green wintergreen ferns which in my mind were the star performers, providing a soft bright green accent in this little area. 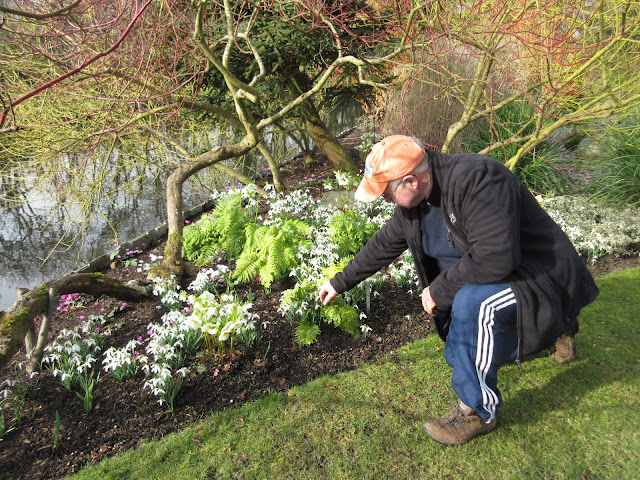 At the opposite end of the garden another new spectacular combination of plants to wow us during the winter months. 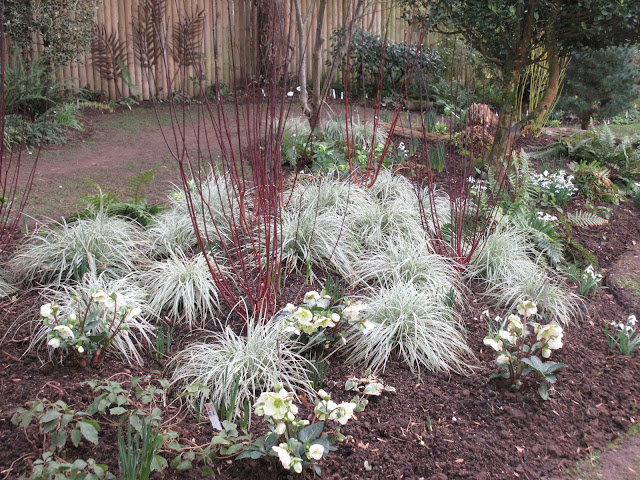 Around the garden cyclamen were catching my eye.... 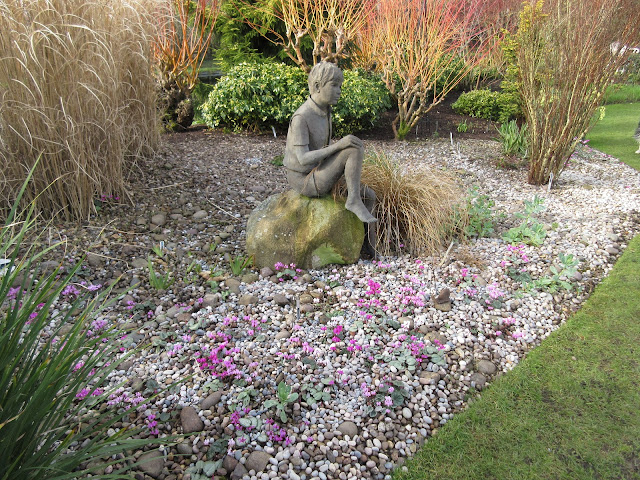 Of course the Hellebores were superb, and had been nicely placed around the garden in beds, where later, swathes of hardy geraniums yet to emerge would provide interest. 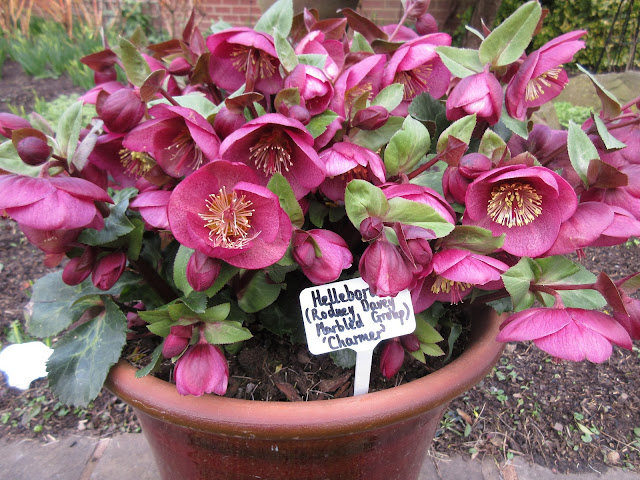 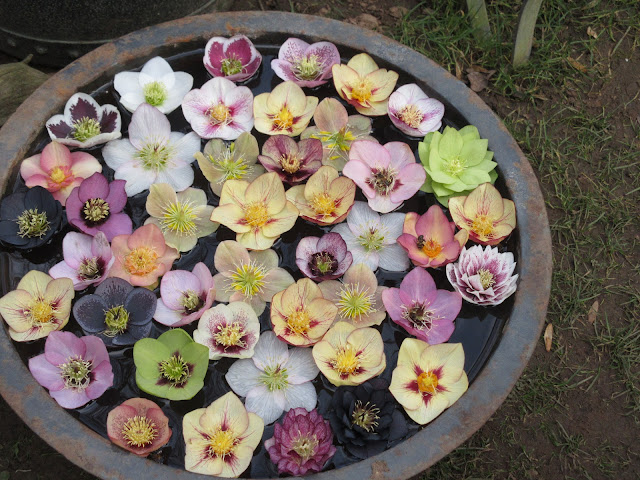 As we were chatting in the garden, John's two dogs started to bark, in the distance a faint bell had been heard....yes our lunch was ready and waiting, so we all returned to John's kitchen, where we sat round his large round table and heard more about John's life. 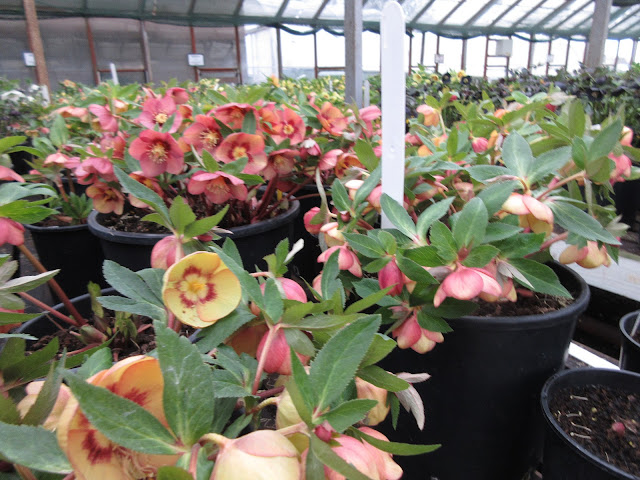 It was Howard Drury who led the group through the glass houses and outlined the direction of development for the Ashwood Hellebores.  Showed off  the best of the current cultivar and also how to pollinate and bring on one's own plants. 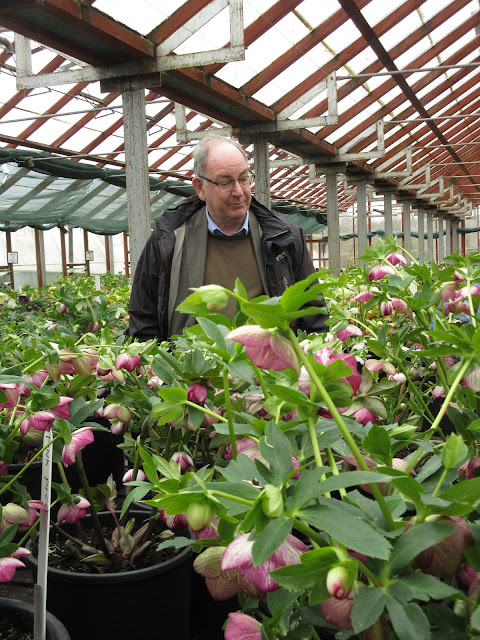 Howard had an excellent way of leading both expert and mere admirer of Hellebores through the intricacies of culture and care.  His website with cultural notes is excellent and well worth reading.

I was truly enthralled by the dedication at Ashwoods to the growing of cyclamen, and appreciated the time  Hayden Warton gave as he took me on his tour, and for his help in choosing plants for the garden .