In a Vase on Monday - To twig

I've twigged it in respect of In a Vase on Monday...on many levels.  You can/may leave your small number of choice spring blooms in the garden.......  This week Cathy who hosts this weekly offering has a lovely vase, so do join in and go and see what she and others are offering up this week.

Here the Amelanchier twigs added to a vase last week are just breaking into leaf, and I am waiting to see whether the flowers will open.  At their feet are some remains of last year's Hydrangea paniculata vanille fraise. 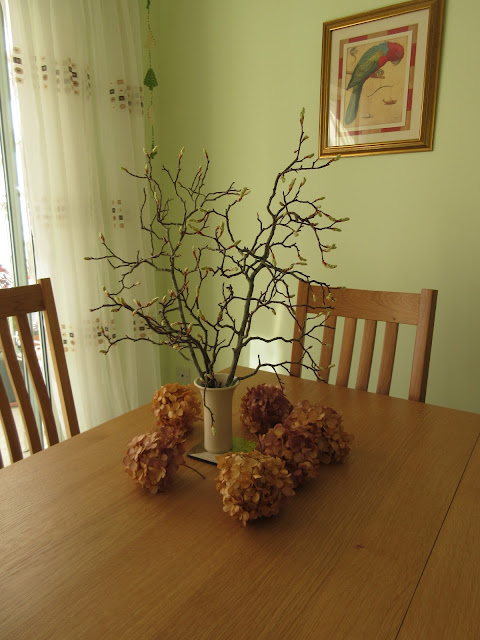 I've twigged it that pruning is good...When we moved in a couple of years ago, the front three Amelanchier trees were pruned, just so as to remove some completely dead branches.  This spring after watching Monty Don in Japan, and then last week having John Massey explain the advantages of thinning out branches to make space in a large shrub or tree, and also my gardening friend Jean's suggestions last autumn, Mr S and I set to.  I have plenty of material to set amongst emerging growth, and act as stakes.

We have had amazing weather this past week....far too warm and sunny, and I wonder what the effect will be later on not only on the garden plants, but the ladybirds, yellow male brimstone butterflies, and peacocks which have been flying around the garden.

Already the daffodils are emerging and showing their bright yellow, as yellow as the yellow brimstones.  I have just about three different types.  The tete a tete little clump again brought as a souvenir from the last garden have been open a couple of weeks, and the Narcissus below which I bought in flower, from last year's Rare plant fair....just as 'chatting' fee to a small grower. 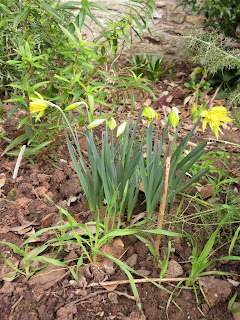 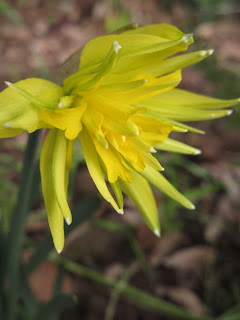 Performing beautifully is the Euphorbia 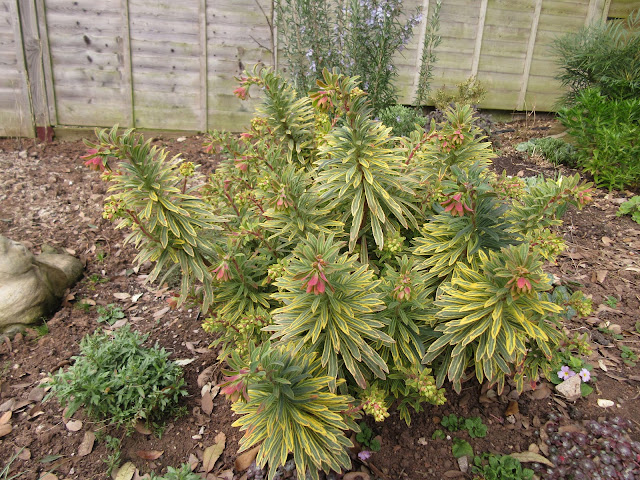 The opening crocus have been a magnet for the bumble and honey bees.  Crocus tommasianus Ruby Giant is bringing up the rear, being the last of the crocuses in the garden to flower.  I had planted corms as long ago as 2013, in a mixed tub.  Last autumn, I had emptied the contents and planted the different elements around the garden.  I did make a big mistake in pruning the Dwarf Forsythia in a dreadful form, spoiling the effect.  Hopefully it will make some replacement growth this year.  I ought to have left it unpruned, and only removed damaged wood. 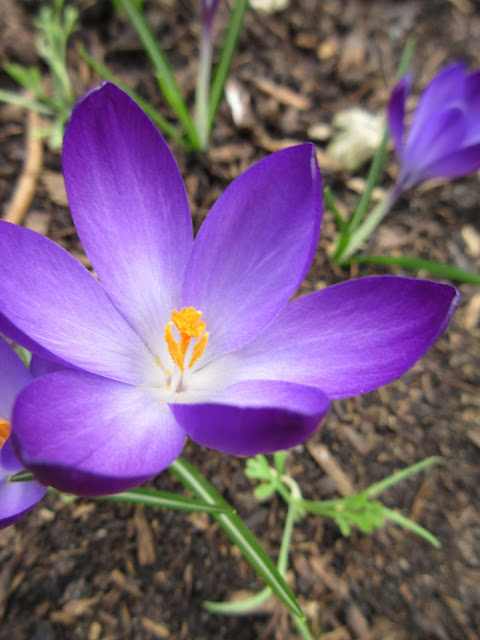