Six on Saturday club with pack leader The Propagator helps us to keep track whatever the season of garden observations..click on this to get the link.  These are other links too within this and other posts which are as much to help me remember points of interest.

"The merest change in temperature now, the slightest spark of light, would fire the green fuses.  The snowdrops were amazing, gorgeous white bells, fat as pearls in the moment of their perfection, hope incarnate.....Today the snowdrops have begun to open their petals, slowly lifting white arms from their sides like ballerinas. "
The light in the Dark: A Winter Journal on 19 th February' by Horatio Clare

I have read that their leaves have specially hardened tips to help the snowdrops break through frozen soil and their sap contains a form of antifreeze to prevent ice crystals forming.  The soil here hasn't frozen once, but the snowdrops now in flower are early types.   They were newly planted last year.  The year before that I found out that Anna loved snowdrops and socks so I had sent her a special pair that I knitted in the softest yarn, and these were a present from Anna the following year. 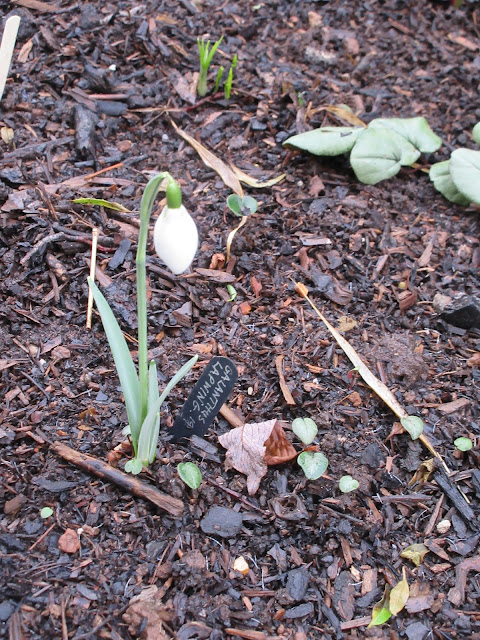 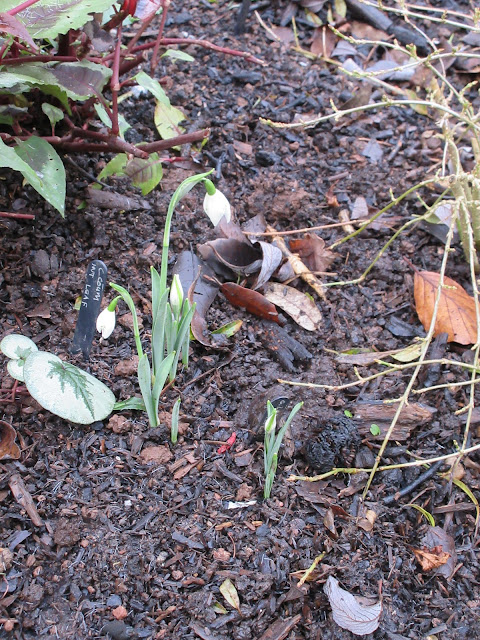 The special snowdrops are all planted in the 'Conservatory Border'.  I love to be able to sit in the conservatory and look at some of the little plants emerging in early spring.

The standard singles and doubles in clumps further away in the garden are just showing their tips.

Some of the herbaceous plants in the Conservatory bed have been cut back, such as this Lysimachia candela, so that the Spring beauties can have their moment. 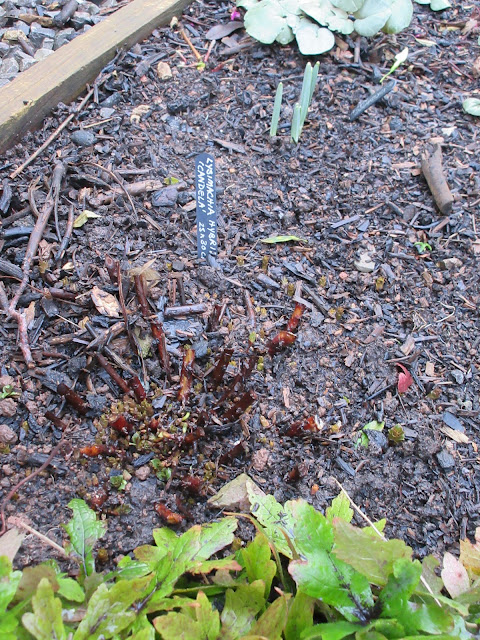 In the middle of the bed is Salix gracilistyla Mount Aso,  It was newly planted last year and featured in my first SOS post.  I'll be removing the bamboo canes which I had used in an attempt to encourage more upright growth.  What I like is that within a few weeks it too will be cut right down and other plants around will have room to unfurl and do their thing. 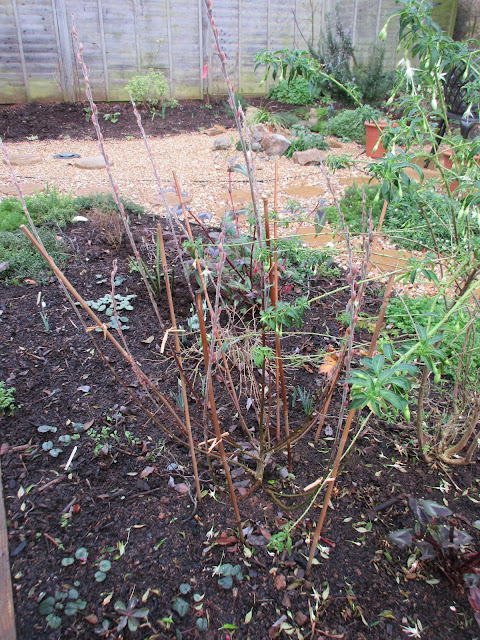 Planted Autumn 2018 this Fuchsia Hawkshead is definitely  in need on control.  It needs a firm prune.  However in this mild weather these are precious blooms for any garden visitors. 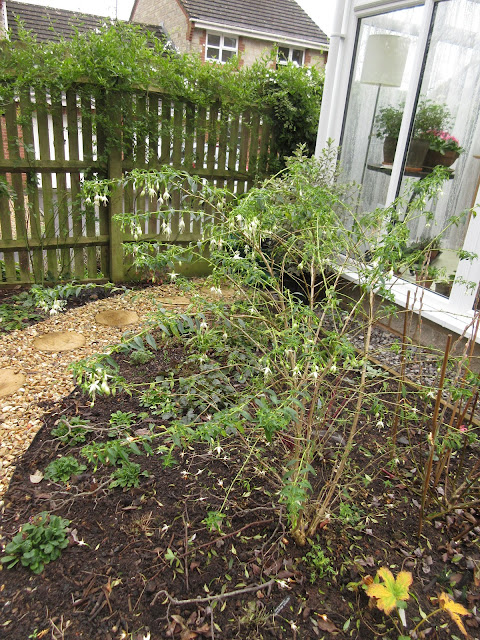 A view of the conservatory border.I need to work on my technique and quality. Technique I can work and there is the question as to whether my little camera is up to it.    I have a target to spread all the mulches I have amassed along the 'hidden side of the house' and this has taken priory over reading the on line manual.  My camera is several years old now and fairly basic but I want to get the best out of it.

I really thought it was too late for bumble bees, which is why I cut a couple of the penstemom blooms for last week's IAVOM.  During the week, as I was attending to the border, and spreading 'muck', I began to wonder whether my tinnitus has reached ridiculous levels.  Looking up I saw this bumble bee on the Fuchsia and by the time I returned it was on the Rosemary.  Its pollen sacks were full.  Apologies for the quality of the picture, which was to record its presence rather than a fine close up...again more work on the manual required! 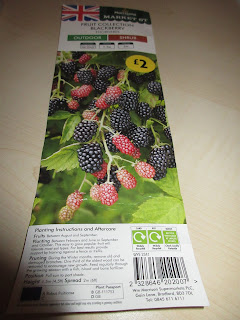 After having a less than satisfactory experience regarding buying a 'prized?' Blackberry by mail order on line, , I have opted for a cheap and cheerful solution.  Milk and butter were on the list.   I also came home with Blackberry Thornfree, which was planted on the same day on Wednesday  with a good mulch of compost to see it on its way.

Blackberry Thornfree : " A good cropping variety that is completely thornless. Blackberry Thornfree is very easy to train. Pick large fruits that ripen in late August to September. Leaves have good autumn colour. Ideal for planting against a wall or a fence or growing in a container."

They had some other fruit, so I may just find room for a loganberry.
Posted by Stasher at 15:22

Labels: Friends, In a Vase on Monday, Six on Saturday