The Prog who leads us and several other keen gardeners has some interesting items this week, so whether today or some time in the week, it is well worth going over to have a look.  We all realise that we may have been thinking or even writing up about our six items at some stage during the week. I did my 'desk work' yesterday and in the evening read a little in the book mentioned at six about frosts....this morning breakfast in the conservatory was taken under beautifully frosted glass. Each panel had a variation of this one but the pattern overall on each was similar...

(1)Pelargoniums in the conservatory

Last spring I cut down the P. Ardens almost down to soil level when I repotted them.  It was well worth sacrificing the one year's flowering potential as I now have two plants with multiple roseettes.  Four leaf rosettes on one and seven on the second plant, Pelargonium ardens promises good flowering this year.  I think the slow release Osmocote may have a little too much nitrogen, as the leaf growth has taken off in the last couple of weeks.  I'm taking this one to the HPS for the show and tell table today.....


Pelargonium coriandrifolium and cuttings are doing nicely.  During down time from gardening the other possibility is on line research.  The internet can lead a 'humble' gardener with an interest to learned and well set out articles such as in the 'Species Pelargonium - wild and unsual' which with a click of a button can be translated from the original Russian to English.

(2) Plants brought back from the brink

If the brink is the third week languishing bare rooted in wind and rain in large tub waiting to be emptied into the Green Compost bin, then this Euphorbia x martinii Ascot Rainbow has indeed been brought back from the brink.  It had been dug up to make room for Pear Beth.  I just noticed it when I was clearing the side when plant pots and compost sacks were waiting to be cleared.

A week ago, I caught a caterpillar on the apple tree, and placed it on the bird table, but no birds visiting the feeders took it, so it was squashed a couple of hour later.  This one was despatched immediately, and so will all others until the birds become interested.

(4 ) Red Primula unknown variety but likely a heritage one as bought at The Vyne NT several years ago.  This has been flowering for at least a couple of weeks and is worth walking along the path to peep should the downpours stop.  In view of Jim's comment below, here is a link to Barnhaven's site. 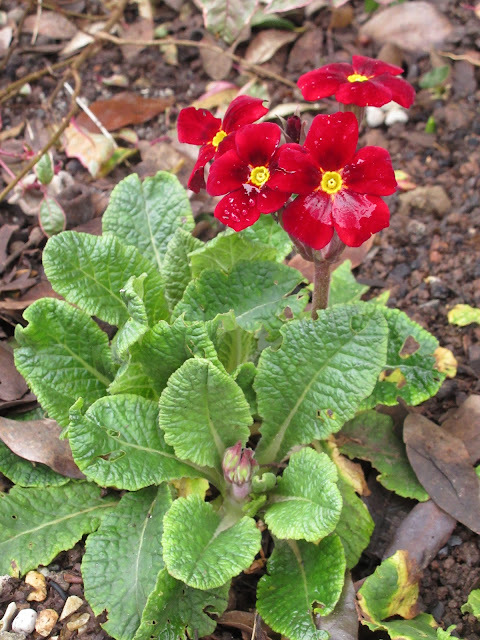 Weeds are just plants growing in the wrong place?


One of the garden projects in the autumn was sorting out the small side border.  A very old  'thicket' of hebe which has suffered during the summer drought was removed, the Spanish bluebells removed etc...or so I thought 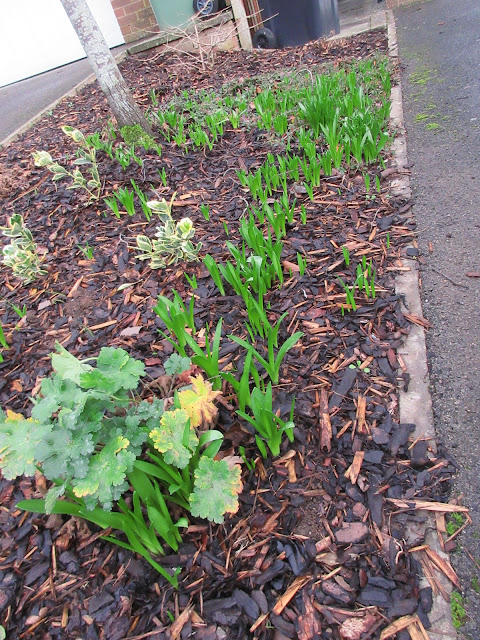 Yes we have had a lot of weather this week: storms with strong gusts of wind, heavy rain, but the 'traditional' winter season has yet to arrive here.  In the meantime I am enjoying reading The Weather Detective by Peter Wohlleben.  Guiding the reader in 'Rediscovering Nature's Secret Signs' in the garden, Peter Wohlleben informs, explains and educates in a very readable form, appropriate for European and British gardeners. (Another book borrowed from my local Library) 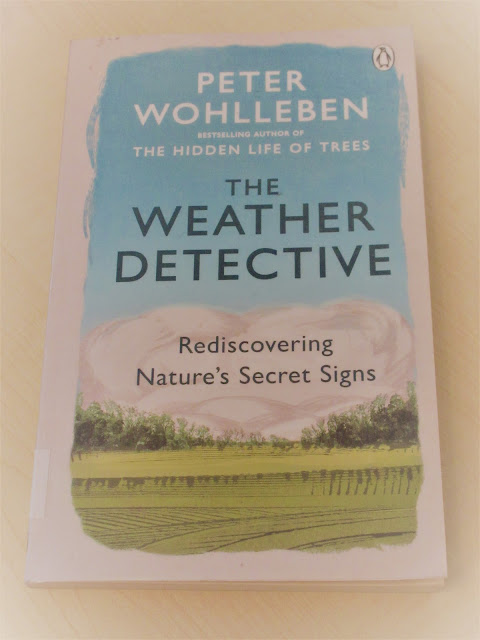 "Wohlleben explains how to read many aspects of nature's signs, from being able to tell the time of day from birdcalls or flowers, to knowing the type of soil from the weeds or understanding the weather and how to predict it. He also looks at climate change and its effects, and ways, as a gardener, to adapt to a warming climate. He explains how to build resilience in the garden, both for food production as well as ornamental plants and developing habitat through interconnection and managing pests. Much of the way to read nature comes through information from all the senses, and he outlines a sensory approach to encountering nature, and if nothing else, as a way of becoming closer to it and more in touch with it, both for health reasons - physical and mental - and simply for enjoyment."   an extract from David Fonteyn's full review on Good Reads website.