In a Vase on Monday - New Vase

This is the lovely vase my friend Jean brought over for my birthday.  I even received a box full of narcissi from The Isles of Scilly sent by my cousin, but sadly they bring on such a pollen allergy, that they cannot form the basis for my arrangement. 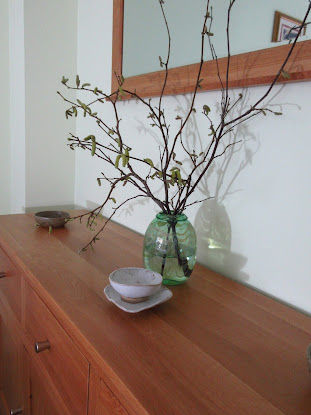 Instead I picked some catkins which were on a branch brought down by some high sided vehicle on one of the narrow lanes down to the levels.  After walking all the way round 'Our Hill', I picked a few stems to show off the vase. Most of the catkins were fully dangling in the breeze  in open sites where the warm weather of the previous week had brought them out.  This hazel tree was in a cold damp shady spot, where the banks are covered by Hart Tongue Ferns, so was picked whilst the catkins were still tight.  Before a few days have past they will probably act as cat deterrents amongst the miniature bulbs. 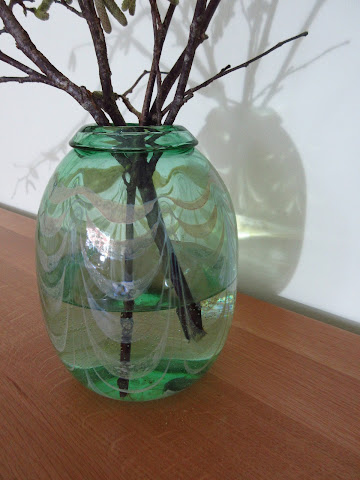 Jean said the vase was signed but probably an 'apprentice' piece.  It is very heavy with just the right sized opening, and with nothing quite that size a perfect member of my various vases.

The Narcissi were 'delivered' to three of my friends, and in memory of the present I shall spend the equivalent on some miniature daffodils for the garden, and thus remember my cousin's present each year.

I'm one of Cathy's many followers on this weekly In a Vase on Monday slot. You can link in and view her vase and many others, should you wish.