Our weekly get-together with blogging gardeners starts early Saturday. He who started this SOS group is first off the blocks, and most of us haven't a hope of catching him up if running, and for long distances is concerned, but I am sure that with a little patch or a large estate, chats and sharing amongst gardeners is the most relaxing sort of thing.

A few hours of rain earlier this week has broken the dry spell and refreshed the garden....but we can do with a little more, and I'm pleased to say that the forecast does not have a series of relentlessly dry days.  Mid May in an English Garden is a great time.

I've had a strange sort of week:  On Tuesday the plug plants arrived and it was all stations panic, and through a frenzy of emails, collection of the plugs were arranged for Wednesday and Thursday meaning  a series of Gardening Club members arrived to pick up most of plugs.  On Wednesday morning, I was able to distribute sell most of the 'surplus' amongst our newly formed group of WI gardening friends.

Here are my Six on Saturday this week: 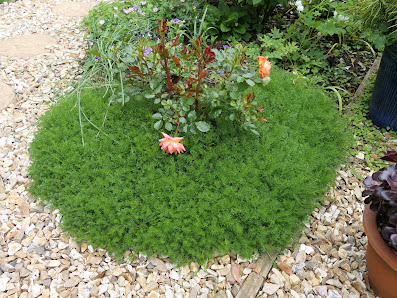 This is what the double-flowered Chamomile looks like at this time of the year before it flowers.  It is a lovely evergreen mat forming herb which has tiny aromatic leaves.  It begs to be stroked or gently crushed underfoot to release that gorgeous  calming scent.  I've showed it in flower with its creamy white pop-pom flowers before. It is probably encroaching a little too much around the rose!  I've prepared some pieces and set them to root nicely in pots to give to a friend to grow around a feature in some paving stones. Those were from another area.  I just love the scent of the crushed leaves, so soothing as I needed that element this week. 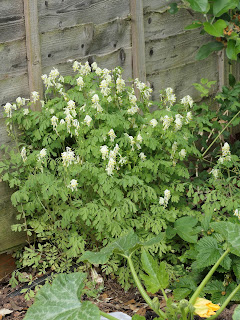 Here in the garden it was heavy clay, which is gradually being improved with mulches. This plant is now nicely established and seeds itself lightly around.  I let it grow if it is not in the way of anything, and since it is a short-lived evergreen perennial and flowers for such a long period, and is good in vases both for the flower and ferny foliage, it is most welcome.  Where it encroaches, as it did here but has already been in flower for many weeks, I clear it away, having checked that there were some fresh seedlings somewhere else. This corydalis thrives both in sun and lights up more shady spaces.  This is a plant I wouldn't be without, so thanks to Alison who supplied the original small seedlings from her garden. I had used the flowers on Monday on In a Vase on Monday and decided to show the plant on this post as I had a comment from someone who liked corydalis but had not seen this one. 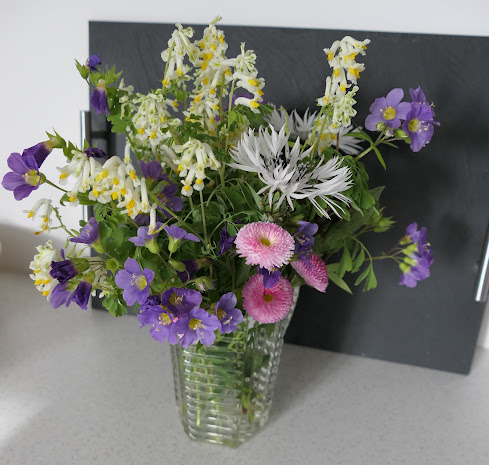 3. Visitors picking up plug plants and a friend dropping me off mentioned our 'Men'.  One person once described these as my Garden Gnomes, but this week Anne made me laugh when they said one was miffed because the other one had a taller geranium. The flowers are remarkably similar and separated as they are by the front door, looks like they are an exact match.

The taller pelargonium was a cutting from a friend's plant which Eileen described as a good doer, and it has some dark patches in the middle of the green bits, and is most attractive. 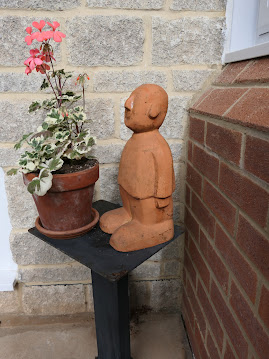 The smaller Pelargonium Frank Headley has a naturally compact habit, are two cuttings from last year in this one pot.  I really ought to separate them, so that is another job for the coming week. 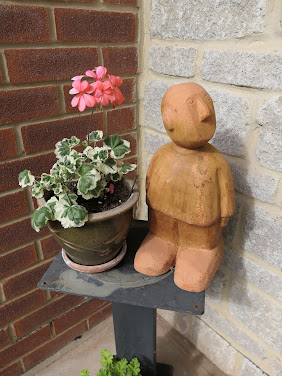 4. I thought it would be a nice idea to buy some plug plants to sell to members of our gardening group, both to raise funds and for us to compare later in the season, and a few months ago placed an order for Nemesia Wisley Vanilla. 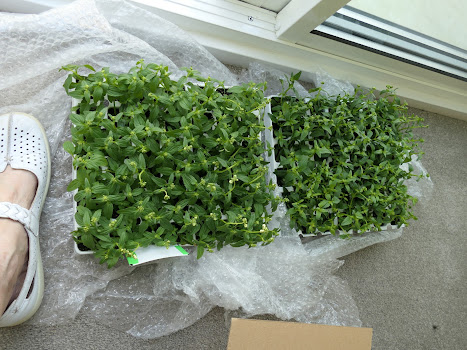 They arrived and I was somewhat disappointed by the size of the plugs, which had been described as large plugs. When I measured them the size of the cells was 2cm by 2cm,at the top of the soil, and at the bottom of the cell the measurement is 1.5 x 1.5cm.  My shoe size is 6.  The description on Brookside's website when ordering was

From Brookside's Website.
The plants were good, don't take me as totally dissatisfied.  They were very quickly distributed with a member of the committee coming to my aid to help.

5. Visiting a friend's garden I was given a lovely plant a golden leaved Persicaria amplexicaulis 'Golden Arrow', and even in within the yellow there is an interesting marking. 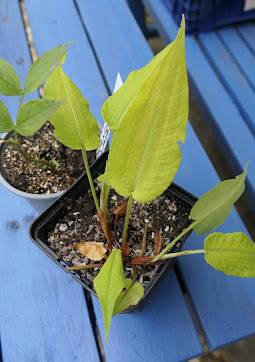 6. On yes!  The Red Red Rose.....Still at the bud stage, her multiple petals yet to unfold, her sumptuous scent still be enjoyed. 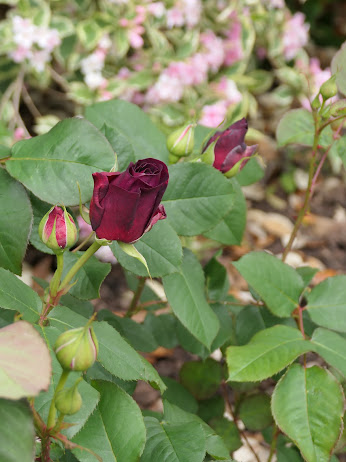 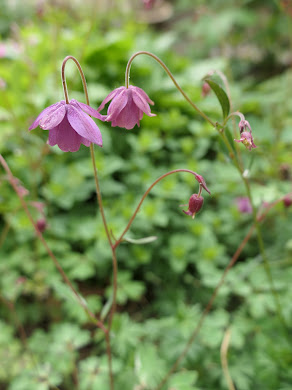 More about this one maybe next week.