It is less than a week since our return from the Isles of Scilly, and the delights are yet to fade. This was our first visit. I say first because I know there will be more....

We went with Johnsons Travel a local travel and coach company, and our courier was Joan Johnson. Joan had escorted trips to the Isles of Scilly over many years, and we heard during one of our trips how she had approached the Atlantic Hotel around twenty years ago and had developed this wonderful holiday with guided walks and trips to other islands. Lapped by the waters of the bay, I woke early one morning, thinking a neighbour had poured a bath and was sloshing around it, but soon realised that it was the sea gently lapping at high tide beneath our window.

We met many local characters known by those who had watched Island parish. The Islanders were friendly and helpful, and indeed Radio Scilly to which the alarm clock radio was set, made us feel part of the community. It gave a good idea of the weather and sea conditions that day, and also what was going on. We went to a couple of evening lectures and also a concert at St Mary's Church.
The journey went well, and with more than ample leg room even for Mr S, we arrived at Newquay airport, and although we had not been selected for the very smallest plane: seven passengers, who had to be weighted, we flew by a seventeen seater Twin Otter.

At no time had these flights been affected by the Iceland Volcano Ash, as they fly low. On the return leg however, we had to wait for sea fog at Land's End to clear, which is where our flight was coming from.

The beaches were just so beautiful, and with white beaches, turquoise seas, and fine weather, it was just perfect....can't say how cold it was in the sea though! 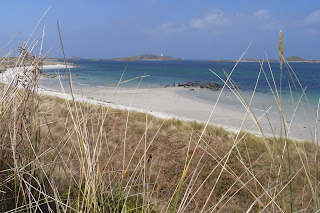 This was a typical bay on Tresco, which is also famous for its Gardens full of exotic trees, shrubs and flowers. There were species which we recognised from Madeira, and also species from South Africa, Australia and New Zealand. 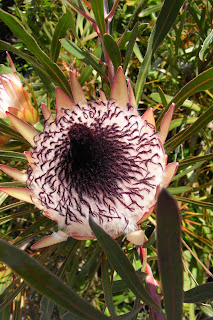 Right across the islands were interesting gardens, fields and flowers growing wild in the hedgerows. I already have some succulents and bought a couple to bring back. I did not realise that a succulent could have such a sweet smell just from its leaves. The Aeonium Balsamiferum is filling the conservatory with its honey smell. It was interesting to see mature Black Aeoniums, of which mine is a mere juvenile, in full flower growing without protection. 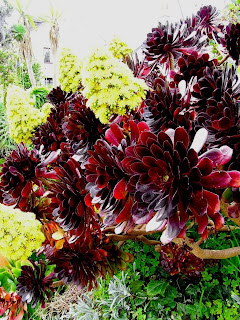 Both on St Mary's and St Agnes and The Gugh, we came across wonderful large blocks of Granite eroded by wind, rain and sea into shapes which just had to be named or described. The Nag's Head on St Agnes, looking toward the sea looks more like a winged mythical creature to me. 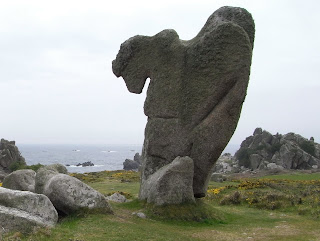 Another beautiful arrangement of worn granite at Peninnis Head on the southern tip of St Mary's was just a short walk from Hugh Town. 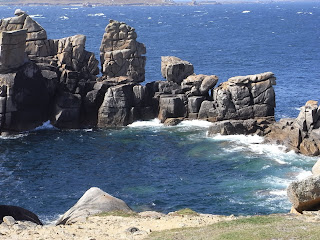