We still had some snow from earlier in the week on the ground, and the threat of more to come.  This year our numbers have dwindled and our previous caterers were not interested in catering for our Christmas Dinner meeting.  Kaye and Margaret suggested that we cater for ourselves, and I volunteered to made a desert.

At first I had thought of a roulade, as a couple of members are gluten intolerant, and one or two could not eat nuts....but then I considered that a pavlova could be more easily portioned, and made a little bigger than my largest swiss roll tin would have allowed for....for then I have just thought I could have made a temporary tin with foil, card etc to sit on my largest baking sheet...  As it was I drew a circle large enough to fit in my largest carrying container, which just fitted on my largest sheet. 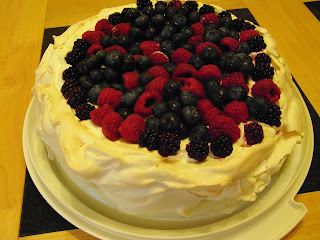 Every person coming up for dessert chose my Pavlova till it was gone, each piece getting smaller and smaller, and the rest the three serving including myself were left with 'bought in options'.  Next year I'll make all the desserts.  All in all a great success. 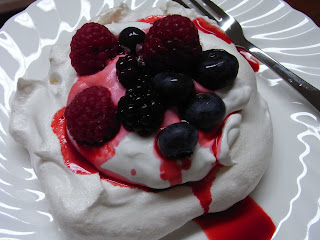 Of course, I made a little mini version for Mr S's supper.  I have only made small meringues before, but after the success of this one, I'll find a good use for the odd egg white for a nice quick pudding.
Posted by Stasher at 16:07