Wherever I go, I try to find out about the local markets...there were three markets in the area, open most days mainly in the morning.  The one in the walled town is really colourful with pretty hand made souvenirs for the hoards of tourists who tumble out of the cruise ships, and also oddments of fruit and vegetables.  I had some freshly crystallised orange peel from the maker on a very small stall, and got two packets, not for eating just like that as the lady suggested, but for putting in cakes and biscuits.  I wish she make other candied peels and fruits too. 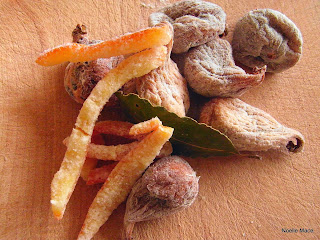 On the other side from the Hotel in the centre of Gruz there is also another daily market, with a good sized covered area, for the fish sales.  Outside the local growers bring in flowers, fruit and vegetables.  I bought a large bag of dried figs, which also had bay leaves in the packet.  You could tell from the shape of the figs that they must have all been laid down on some rack to dry naturally.  The market changes in size and was much busier on Friday and Saturday.

Another morning, leaving Mr S in bed I went in search of the Lapad Market which I would not have found but for the detailed directions from the hotel staff.  There were just three market holders on this mid week morning.  I sort of had a chat, and worked out that the women were the growers too, at least their hands had that look of hard work on the land, and their faces darkened and wrinkled after a summer in the sun.

I bought another bag of dried figs which I understand had been gathered and dried by this lady, a bunch of grapes, and was given a big bunch of rocket which I later had with our packed lunch.

During our visit to the Ethonographic Museum Rupe, in the old 16th Century Granary in the Walled City, I 'defied' the no photography edict, and took a picture of this fig drying rack make from reeds or fine bamboo. 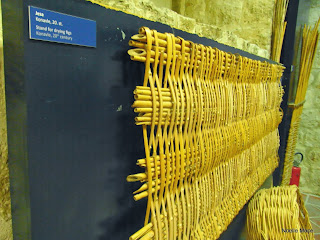 Earlier I had tried to take some pictures, and was 'set upon' by a stern room steward, but I felt that with no flash, and no picture which could risk infringement of some copyright, or jeopardise security, I did sneak in just a second one of this basket.  It reminded me of the basket Veronica had only recently woven. The top is make from two strong forked tree branches, and the longitudinal struts were spliced pieces of wood which had been grafted into the rim.  They are then woven with some strong pliable material, maybe reeds.  I'm not sure of any of the terms, but I hope this gives an idea of its construction.  It would definitely be strong enough for its job of moving earth, and with the two handles could be carried by two people.  I would just love one for use in my garden, much nicer than a big plastic bucket! 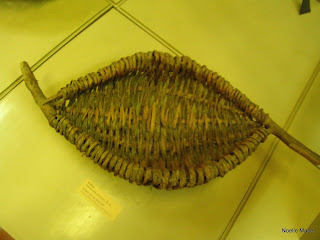 I would have loved to have taken other pictures of the wonderful artefacts, and costumes even just to remind me of the wonderful detail.  Most British Museum do now permit photographs.  The building itself is most impressive, and its use as a large exhibition space very good.  I would love to be able to visit this one again.  I could find no book at the desk with details of the artefacts, but I have found some lovely pictures on line of the Rupe Museum. 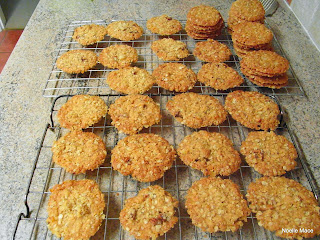 When I was making the biscuits for the Trick and Treat Callers for Halloween, I took part of the Anzac biscuit mixture and added some chopped orange and fig, and they were wonderfully fresh and delicious tasting.