Within the last month or so, we must have heard together Mr S and I about one of Mary's Favourite Recipes, maybe it was on the Bake Off master class.  Well with this in mind, I got the Mary's Baking Bible off the shelf, and made her Ginger and Treacle Spiced Traybake early on Friday in plenty of time for it to be cooled, and iced, ready for tea when Mr S got home.  Also he had often talked of his mother's gingerbread cake made with treacle.  Just in case you would like to make it and don't have the book, here is a link

This is a very easy recipe, but here are just a few extra tips:  use a very large bowl for mixing, I warmed the butter up by putting the bowl with the butter in, over my washing up bowl full of warm water, which I later used for the washing up!  Measure everything accurately and add, then mix all together.  Level well in the lined tin.  Bake just below half way down if you have a convection oven. 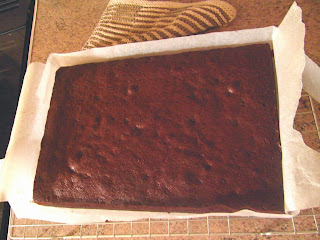 Since the cake is large, and Mary says it freezes well, when it was cold, I cut it into three.  With two pieces in the freezer, I only used one bulb of ginger and much less icing to top the remainder, which had make ten nice sized pieces.  It makes a rich and tasty cake, just right for this time of the year.  We had a piece just now for our Sunday after tea, with the last of our two Doyenne de Comice pears from the garden. 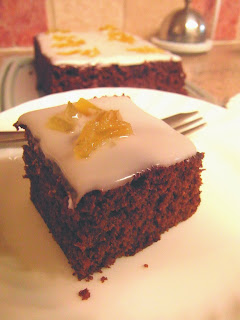