In a Vase on Monday: Seeds shared

Cathy who hosts this meme is quite in agreement with this seed sharing habit: I have a few packets waiting to be sown...and I wonder how many blooms Cathy has grown from seed in her very pink vase this week?  Do go and have a look there, and also through the comments at what other contributors have come up with.  Do take your time, dip in during the week..there is so much of interest.

Looking back its nearly a year since I posted a vase with Nasturtiums.  If you would like to learn about one of their other names: Lark Heels, go there and have a look.  I had thought to make up a vase with quite different flowers, but it is on account on an amazing encounter and gift yesterday, that I have decided to first show my little grouping of flowers, branch with lichen, and seed packet. 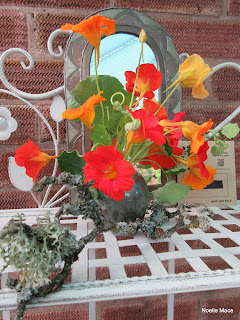 Mr S and I went out yesterday to Upton House principally to donate a collection of vintage cookery books, some dating back to 1850 to the National Trust.  We noticed that they had many old ones available for people to look through, as well as a section when some were for sale.  The little branch covered with three types of lichen came from a pile of rubish in the garden, and it just matched the glaze on my little vase. 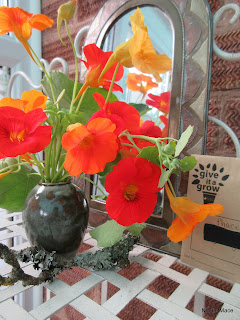 These nasturtiums just grew themselves from seeds which had dropped out in the patch where they were growing last year.  I also had packed many and given them away last autumn.  I love both the form of the leaf and also the seed head. 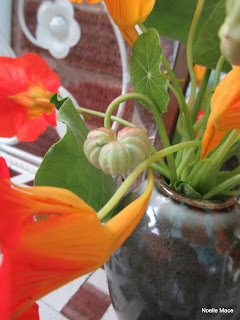 It was going to be some time before we could enter the house with our timed tokens, and thought to see what was going on in the courtyard.  I got chatting to Lynda who I believe is a volunteer gardener, also promoting Grow Organic which I remember as  Ryton, and of which I used to me a member.  Lynda also works with some people with special needs on gardening projects.  We talked about composting and about my 'late' wormery.  When we talked about growing food, I forgot to say that I did have a couple of gooseberry bushes, some blackcurrants, an apple tree, and blueberries!  I did however tell Lynda about our In a Vase on Monday, so I hope she will read this some day, and maybe even contribute with others.

Lynda asked if I used the nasturtium seeds to made 'poor man capers'.  As Mr S isn't keen on them, I haven't, but driving home I had the inspiration to use them in some piccalilli... 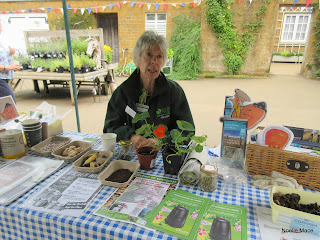 Lynda was sporting a very attractive peas in a pod knitted brooch, and I explained that being a knitter I would love to knit some for my gardening friends!  Out came a copy of the pattern which I now have.  Some knitters at Upton House had knitted them for all the volunteer gardeners.  Ought  I to knit one to give as a prize at our Horticultural Club Autumn Show?

This was not the only lovely thing...wait for it...when I explained that I loved wild bees and insects and grew as many flowers as possible to attract them, Lynda reached into her box, and gave me a packet of seeds...I almost felt faint, they were Phacelia.   I had only written about the Scorpion Weed a couple of days ago in the Tatton Park post , and had been wondering in the wee small hours, just a few hours back if I could find someone locally who had been growing these and ask them for some seeds!

I just want to show you how my vase from last week is doing..the clematis in bud is about to open, the Reg Dragon may be rooting... 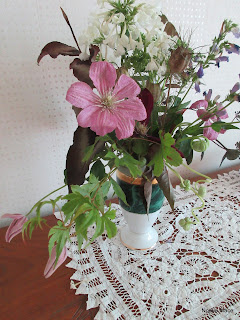 and this vase which contains a mystery shrub rose...which came dug up from a friend's garden refurbishment 'rubbish' in March, with only the tiniest root on it on a thick stem.  It has been watered and fed, and this is its first flower. Any ideas of a name?  The leaves are acer, and the sedge is the Japanese Carex Oshimensis Everest.  When Liz and Janet came round this was one of my potted plants which was much admired, and it has since been carved into three, and these leaves were salvaged from the operation.  I bought the plant back in January last year, and since then we visited that nursery again recently.  Not many of the other plants have survived, but this one is really lovely particularly in low Winter Sun, when the pot comes to live on the patio. 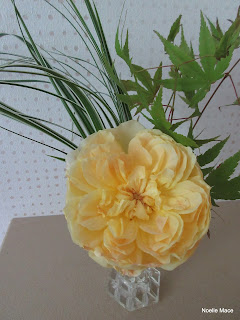 Labels: Coincidences, Friends, In a Vase on Monday, Plants, Serendipity