I would have been pleased enough showing a couple of gardening friends round, and discussing our trip to Tatton Park over coffee and buns in the conservatory, but the pleasure will be remembered for a long time, as I care for and enjoy the plants which they brought.

Both ladies are great gardeners and Janet has been propagating plants for a very long time, and recently Liz has been having great success now she has her lovely greenhouse in operation.

Last year during the Open Gardens I very much admired an usual plant on Liz's patio table, and found out that it  had been propagated by Janet.  It had already turned a little woody and looked almost bonsai like in its pot.  This was one of the plants which Janet brought for me.  Its just been potted up, so will continue to be cossetted and may be put in a border next year. 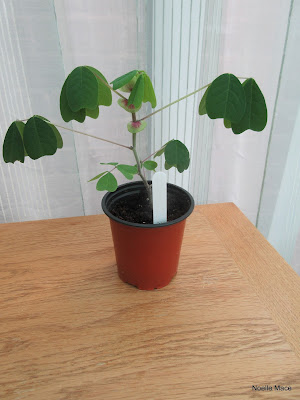 Amicia zygomeris originates from Mexico and is capable of growing quite large, although it will probably die back during the winter.  I love the leaves which are formed from two pairs of heart shaped glaucous leaflets, and the purple veined stipules.  I also found out that as the light starts to fade, the leaves droop...so you can tell that I took this picture late evening.  The young stems are covered in a 'velour' of tiny hairs. 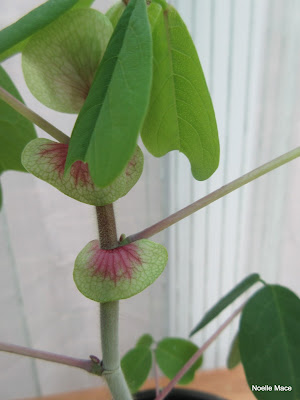 Its a leguminous plant in the pea family, and when it eventually flowers I read that they will be pea like and yellow.

The second plant which Janet brought was a well rooted cutting of Fuchsia microphyilla 'Silver Linings'.  It is a hardy fuchsia with little leaves that have an unusual silver metallic shine, which contrast well with the red stems.  This was one of the 'souvenir' plants which Janet bought when we visited Bourton House Garden back in May.  Janet chose this lovely fuchsia and as we all admired it, she calculated that she would be able to get sufficient cuttings to give us all a little plant. 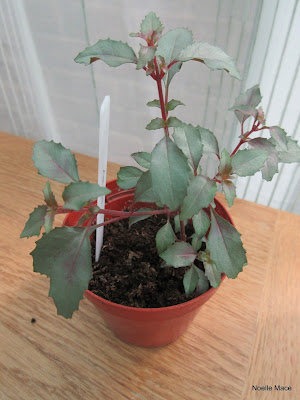 Liz brought me two lovely additions:  Agastache Mexicana which she had grown from seed, and a piece of her Chiastophyllum oppositifolium which I had much admired in her garden.  I've just repotted the Agastache and hope to plant it out into its permanent position next spring. 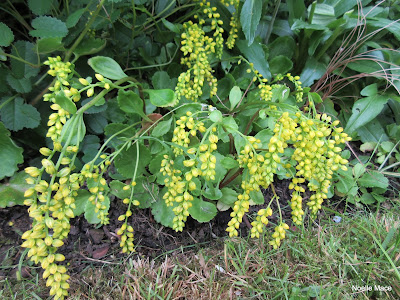