Today I baked another batch of Finnish Rye.  This time I kept to the recipe in Jane Mason's Book Perfecting Sourdough.  There are options within the recipe, in this case I chose white flour, wholemeal rye to refresh the sourdough, and honey but halved it.

As previous times I doubled up on the recipe, starting with the refreshing of the rye sourdough just after lunch,  kneaded it last thing at night, and then popped the dough into buttered tins, which were left to rise overnight in the conservatory.  I had thought at first to try the fridge, but it seemed a little too cool in there. 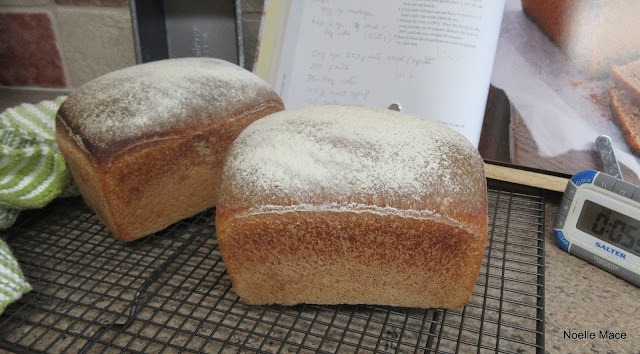 My rye sourdough starter was running down...but I made the mistake of taking 100g to refresh, so now with 300g rye and 600g water...I have a large vat in the fridge, so I shall have to continue baking! I ought to have started with the 50g suggested by Jane Mason!

For my first attempt at this recipe I used some white spelt flour and white wheat flour, with wholemeal rye to refresh the starter, and that was delicious and very good.   The technique fits in with how I like to bake: overnight rise, and straight in the oven, after kneading, and popping straight into tins.  This is really straight forward, and you could almost do this with your eyes shut, making this one recipe and technique so reliable and therefore the one to turn to if one is not necessarily on top form!

My second adaptation was to refresh the starter with rye and spelt, then for the flours use 150g Khorosan,, 300g white, and 50g amaranthe grains, with carob syrup for the sweet note.  I baked some in small tins, and sold them at our WI meeting to other members as we had a sale of cakes and preserves to raise funds for the WI's Denman College.  One of the members is so interested in sourdough that I have invited her over for a day's baking.

I think it is the technique of just one rise, so easy for the times when there are so many things to get on with!