I've made muffins before using fresh yeast, and dried yeast, and just love this very British Bun.  Back in 2013, I wrote about one of my muffin batches, and having looked at that, was reminded of the cooking techniques.

Nigel Bamford set English Muffins on page 91 of Jane Mason's 'Perfecting Sourdough', as our Baking Challenge for the first half of July.

To fit in with when I like to bake which is in the morning, I started around lunch time yesterday, kneaded the whole lot before bedtime, and left the bowl covered in the conservatory overnight...in the morning the dough was ready. 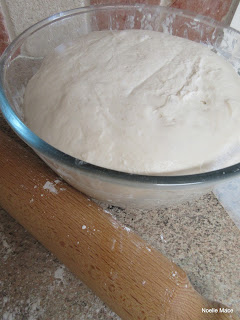 The individual crumpets were rising on their sheets with a little semolina during our breakfast....and about an hour later, they looked ready for their griddling. This is what they looked like after a couple of minutes and their first turn. 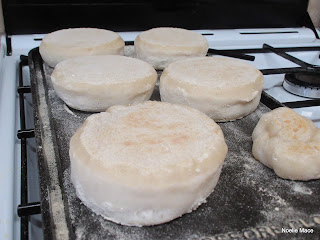 Again, after a couple of minutes a turn, and several turns for about eight minutes, then a further 8 to 10 minutes in the oven at Gas Mark No 4.

I rolled out the dough and used an 8cm cutter and still I think I could have rolled a little thinner to  1.5 cm and got 12, rather than the 11.  There was plenty of rise even after a double flip....and I did not use the bicarbonate of soda, as my starter is very active, and had never come across this for muffins. 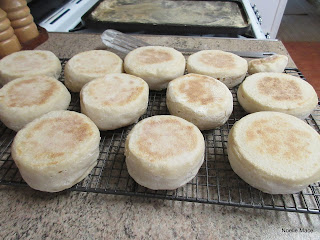 Traditionally muffins are designed to be split and toasted before being eaten, which is why it is preferable to griddle on a medium heat to avoid scorching...as they will brown further when they are toasted.

As we had woken early, and therefore had an early breakfast, it seemed quite natural to me to have a 'second breakfast' when it was coffee time.  A muffin, split and toasted, topped with butter and golden syrup.  I just love the designs on the Tate & Lyle Golden Syrup tins...this one a special one for Queen's Birthday. 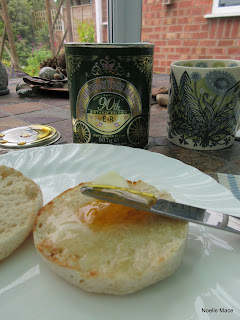