In a Vase on Monday - Tickled Pink

I'm tickled pink that my Hydrangea Vanille Fraise has survived the move, and still in its large pot, is flowering beautifully in the middle of the lawn.  I love the white stage most of all..the plant is like a little pool of light against the Dark Holm Oak on the other side of the stone wall....as the weeks progress it will become Tickled Pink too!! 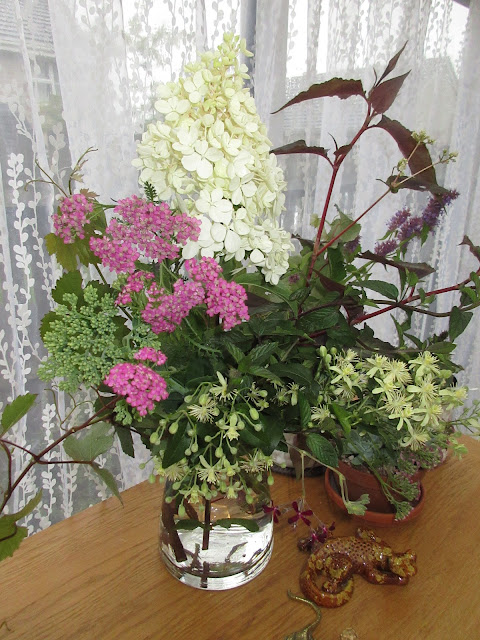 I stole myself to cut one stem..and then went around the garden to find some other material to cut..so in this week's vase I have:

Hydrangea Paniculata Vanielle Fraise...still at the white stage
Percisaria Red Dragaon
Achillea Millefolium Lilac Beauty
Agastache Mexicana grown from seed by Liz in Kenilworth.  This plant is starting to perform now we have had some rain at last. 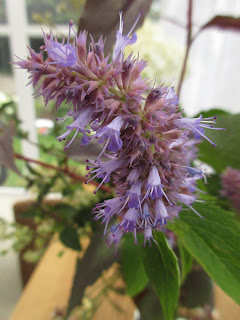 Stems of a dark leafed grape vine which was already in the garden
Sedum spectabile still green
Chocolate Mint...which smells of After Eight Mints...yes really!
Clematis Vitalba...Old Man's Beard growing oven our wall and tolerated at the moment... 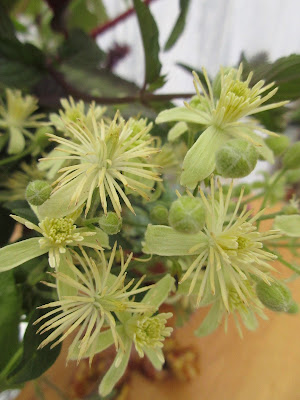 A Stem of Pelargoniumhybrid sidoides x reniforme “Burgundy”, which got broken off the plant..ouch!   It got knocked off when the shading of the conservatory was brought down for cleaning!  This plant came from Janet another knowledgeable plants woman in Kenilworth.  I have been nurturing this geranium for some time.  I love the way its rich magenta flowers continue to grow in little bunches along the main wiry flowering stem which continues to produce flower tufts.  Its little round crinkly silver grey green leaves are attractive all the year round.  Because of its long flower spikes it is rather difficult to photograph, so maybe, its breakage was a way of it getting in on the act....it is at the very front of the arrangement with its red flowers only slightly visible...must get a close up of the lovely small blooms!

So by being a casualty, the pretty Species Pelargomium, a native from South Africa, made its way into the vase and into my blog...Cathy who hosts this meme, has quite coincidentally used casualties from her garden to make up this week's vase....do go there and see what she and others have come up with this week.

Labels: Friends, In a Vase on Monday, Plants