I've been watching the Haworthia in its salts encrusted pot and wondering whether it was in need of repotting.  Its been trying to flower all summer...trying to.... because for one reason or another I have been pulling out the extremely long flower, as I felt it would be better making side shoots rather than trying to reproduce through its flowers.  It has been in the same pot now for four years since I bought it at The Shrewsbury Show.

I wrote about my little Haworthia Tessellata showing its very long flowering stem, and have since found some posts which are very informative such as this one: http://www.plantsrescue.com/haworthia-venosa-subsp-tessellata/ and Dave's Garden, which is often useful too for many gardening problems. 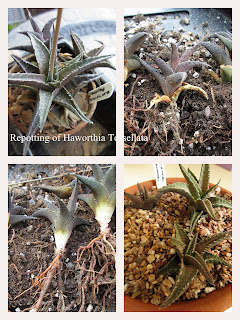 With some of the very old lower leaves removed, they were repotted in new compost with added grit and perlite, and a pinch of slow release fertiliser.  On the top is a light layer of grit, which I think adds an attractive background to show off the plants.

I shall refrain from much watering over the next couple of months, and try to keep it in good indirect light, and hope that it will be happy for the next few years.