In a Vase on Monday - Early this time

They say the early bird catches the worm...we have this young robin waiting for worms.  Mr S is moving turfs...turning them over, as he excavates soil and moves it around the garden.  Here is his little companion. 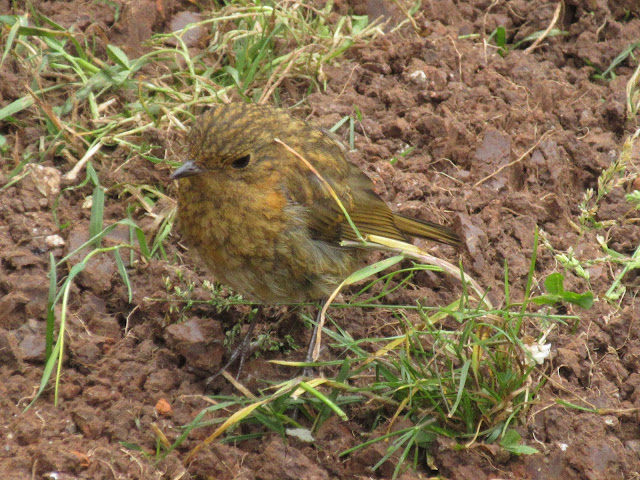 Meanwhile, I have made up a little vase. I have been getting my dates mixed up, and thought the 17th would be Monday.  That meant that I was quite surprised that on Sunday morning...I had anniversary greetings, as well as having to rush and wish my sister a Happy Birthday.

The important thing is that I was thinking of both of these whilst gardening and then arranging a few blooms from the garden.  I thought I was arranging this for Monday...but Sunday was the day after all for the arrangement.  Instead of being a day early...this vase was spot on for the 17th of June.  But it turned out a day early for In a Vase on Monday.  Am I having an Alice in Wonderland moment? 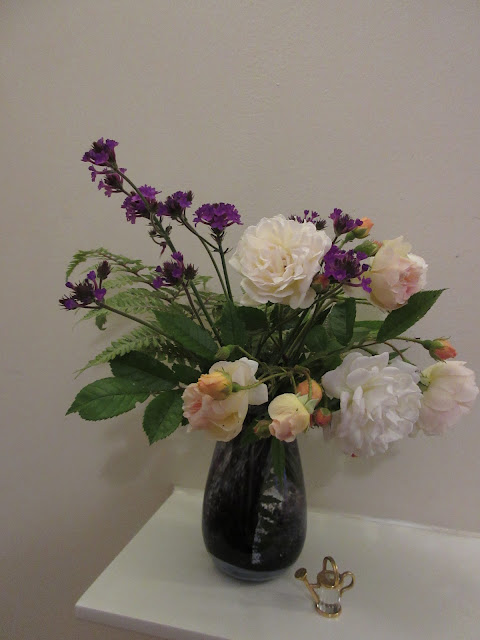 Of course I would have nothing had I not been watering...hence the little crystal watering can which once belonged to my mother.  Or is it one that Alice was using?

The roses are Ghislaine de Feligonde.  They are the first blooms off my plant which I grew from a cutting from my original rambling rose left behind in Warwickshire.  I'm not sure how the plant will behave since it is not grafted.  I would have left the blooms, but was busy sorting out the area and wanted to spread some more compost..so these growing close to the ground would have been damaged, and were therefore snipped off.

The Verbena Rigida which was still flowering last October, managed to survive the cold and wet winter, and has put on good growth, and even sent out a couple of suckers, which I have planted elsewhere.

The leaf is from Athyrium Niponicum Burgandy Lace, which got bent and nearly broke off.   I was using the hose, and I caught the plant..the waterbutt is now empty!

Cathy has some snips...and an interesting post about using 'prunings' in a vase.  I think many of us add 'prunings' to a vase.  Why not join in, and go and see what Cathy and others have 'gleaned' from the garden today.