Its around two weeks since our return from Crete.  We are recovered, and all the various activities are now more or less back in equilibrium.  How right is Roger the no dig gardener when he writes:

"Holiday experiences are best when you are home - so much to tell and the discomfort forgotten".

After the first week on Crete, some of the walking party stayed on for a second week, including a friendly walking group of five friends from Yorkshire.  I warmed to them all:  Betty whom I nicknamed the Chairman,  was an intrepid walker and a committed member of the WI and not surprisingly a good organiser and with her friends had found a local trip agency on the short walk up the hill behind our hotel.  Together with some of the other  'walkers' we all went on some outings with a local trip company, who picked us up from a spot on the main road below the Hotel.

Two of the Yorkshire group whom we met, have become friends on facebook:  Betty and Joyce.  Its when I learnt that Joyce had just finished reading The Island by Victoria Hislop , and having read Roger's post with that insightful description of holiday memories, that I looked out the photographs and decided to put some thoughts down regarding some of the aspects of our holiday in Crete.

The coach trip to the little harbour of Plaka, from where our boat trip started, gave us views of how that area has been developed and the hills cloaked with villas of the affluent, drawn to the area no doubt aided by the 'Hislop Effect'. Up market shops and chic cafes lined the street, quite a contrast to the 'downmarket' overdeveloped area our hotel was based in! 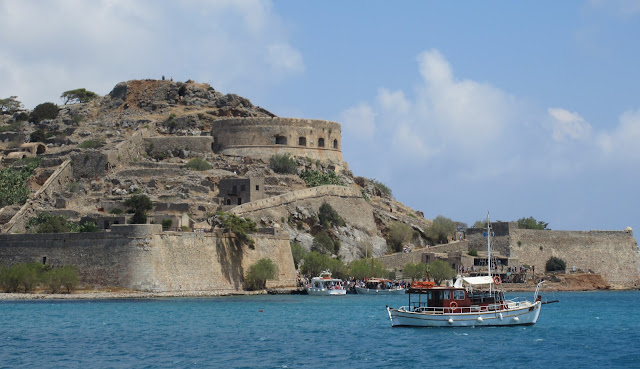 We had quite a good amount of time on Spinalonga.  The history of the island is well described in English in the little Museum which has been set up in some of the old Ottoman buildings.  These had been converted into little shops during the period when the island was used as Leper Colony during the 20th Century. 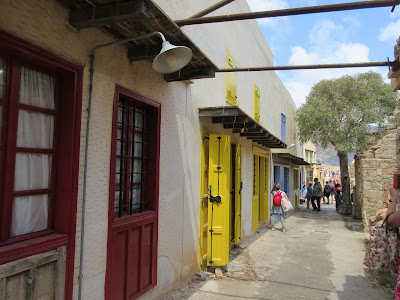 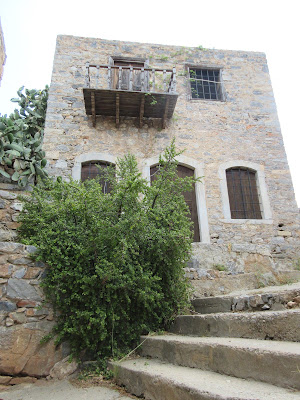 Before setting off for our 'barbecued' lunch on the boat, the boat circumnavigated the island 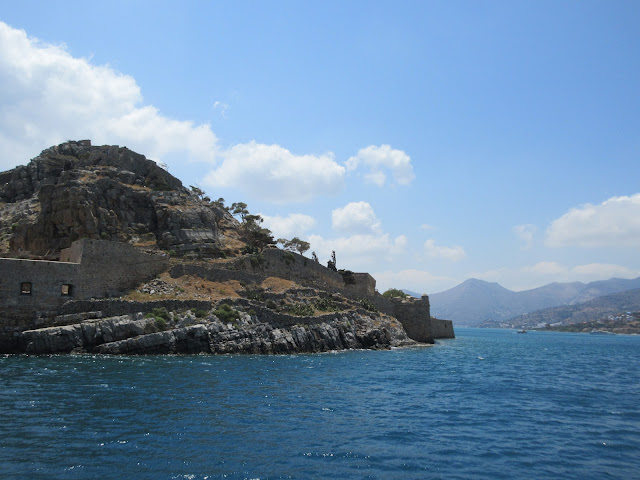 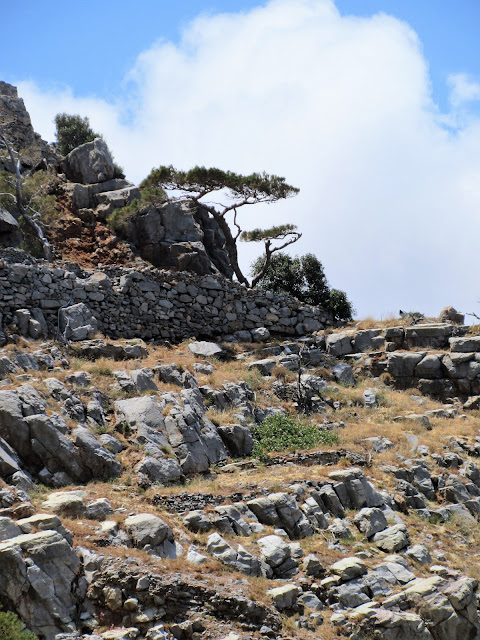 On Spinalonga evergreen trees cast small areas of shade amongst the ruins. 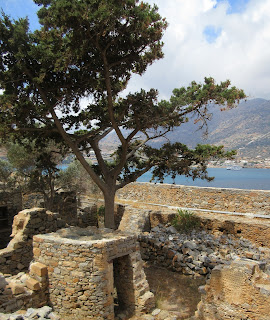 On rock slopes plants managed to survive the strong sunshine, scorching temperatures and arid conditions, and this was early May...

This is a close up of the caper flower, showing off the freshly opened four petaled bloom with its long violet stamens.  The bush was growing out of a rocky cliff face, with its roots seeking out moisture deep down.  The island has no water, and the cisterns with their long domed roof collected water from roof tops. 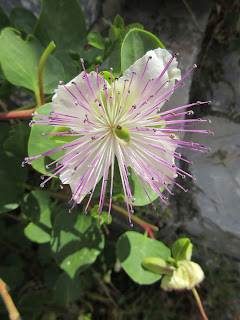 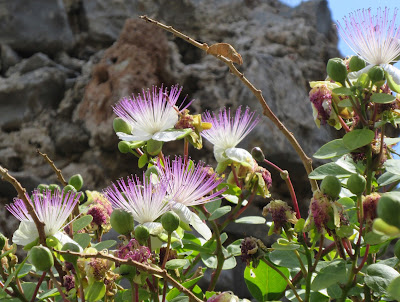 Other plants survived such as the horned poppy 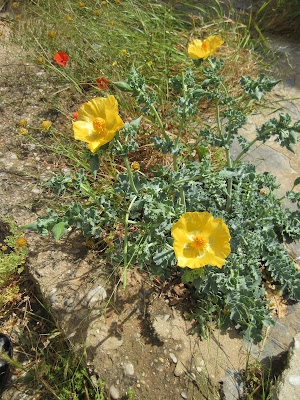 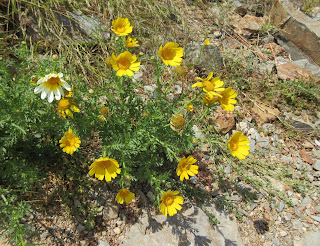 I had taken a copy of Wild Flowers of the Mediterranean, but have found a link with great photographs.  When I have a little more time, I'll be exploring the list. 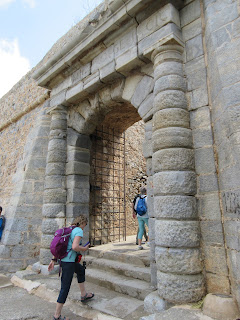 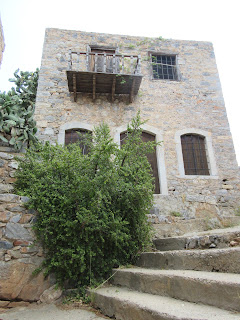 After lunch and the ferry back to the mainland, we had some time in the pretty town of Agios Nikoloas.  Some of our time was spent sat by the 'Lake',  in the shade, people watching.  After the time walking around Spinalonga and the boat trip, sitting by the water with a solitary live musician within earshot was very relaxing. 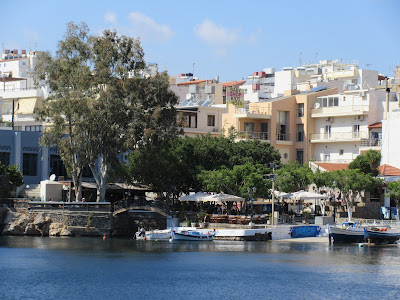 By the bus and coach park alongside the sea front overlooking the Gulf of Mirabella is this larger than life size statue representing the myth of the abduction of Europe by Zeus who had changed himself into a Bull. 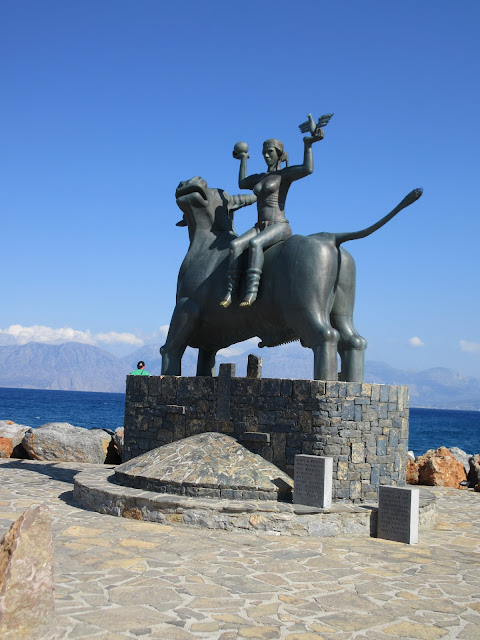 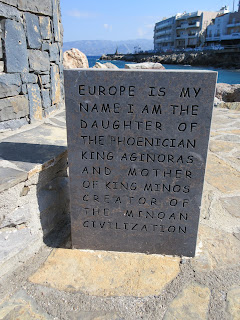