Its several weeks since we returned from our fortnight's holiday in Crete. As I carved up a large pineapple ready for Chutney, early this morning, I remembered the wonderful flower, fruit and vegetable arrangements on display at each of our wonderful meals in the restaurant at the Imperial Belvedere.

Every element for the displays is chosen from fruit or vegetables fresh in that day and from flowers and herbs growing in the attractive grounds of the hotel. 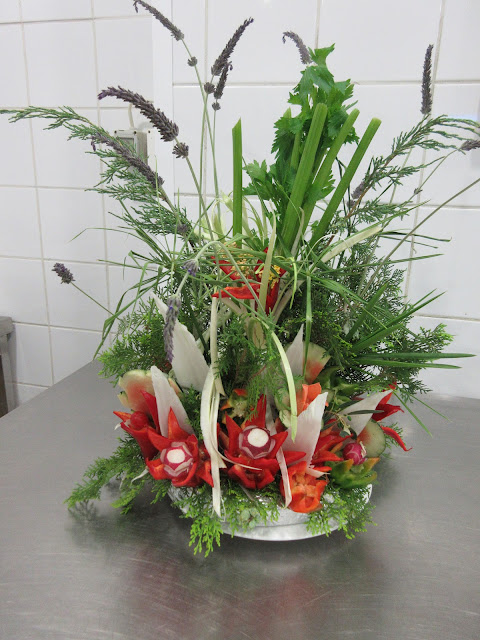 On the first Sunday of our holiday, as we were resting from some walks, I opted for the Kitchen Tour.  This is the first time I've toured a professional kitchen of a large Hotel.  I was totally impressed. 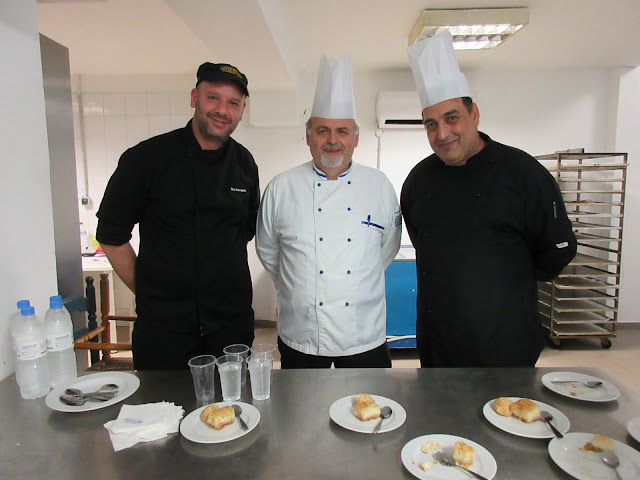 Maitre Nikos Kastanakis, together with Head Chef, and Restaurant Manager guided us around the voluminous kitchens all found in the basement below the two sister hotels: The Imperial and Royal Belvedere Hotels. Lifts take the dishes straight up to the restaurants above.

Areas and large refrigerators, I think there were around 18 room sized refrigerators which we walked past, such as these are highly segregated with different categories of food.  The management and cleanliness of these areas is exemplary. 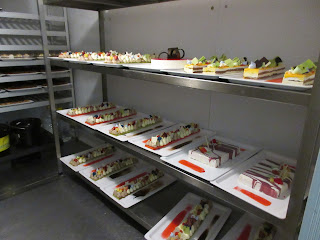 The Kitchens  have their own butchery, and areas where all the fresh produce is sorted, and cleaned, before entering the preparation areas.  The waste food area is also refrigerated in its own area by the exit, awaiting collection, which means there are no smells whatsoever whatever the weather.

The Hotel has its own olive oil, and honey which is served at every meal,  comes from the hillside hives situated on the slopes above the hotel.  All the lemons come from the orchard on the Hotel site too.

I was really interested in the bakery where the wide range of breads, rolls and croissants  are made from scratch each day.  In a separate area I met two of the pastissiers.  The head of this section is Ilias Mastrogiannis who manages several pastissiers and two chocolatiers.

At the end of the tour we were given tasters of local specialties.  As you can imagine, in all the areas there are many well trained and experienced hands.  When I explained that my husband, who was not on the tour, thought their chocolate desserts were amongst the best he had had, they explained that they were had the very best of 70% best quality Swiss Chocolate as a starter as well as the best of local ingredients.  Not being able to eat chocolate, I was non the less spoilt with the choice of beautiful fresh fruit and other delightful desserts.  Even filo pastry desserts are all made on site...and with a bowl of the wonderful honey, I did not hold back but drizzled the odd teaspoonful on!

We met the artist responsible for all the lovely decorations....I would have loved to have a carving workshop...but time was too short! 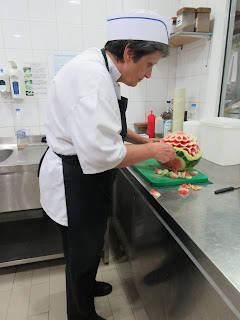 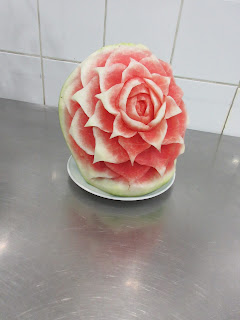