In a Vase on Monday - The Start of Spring

Officially or in any case what is generally accepted in the UK the first of March is the start of Spring.  We have had a couple of warm sunny weeks in February, and now wet and windy returns.

Yesterday we had gales and rain as Storm Freya went over, and it is then that I went out to rescue a few blooms, as I thought that by today they would have been smashed to pieces. 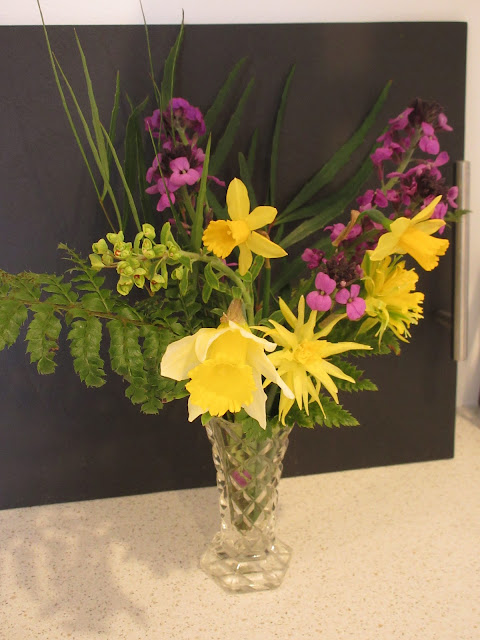 The two stems of the starburst daffodil Rip van Winkle are the last from that clump.  Before it started to rain they were doing pretty well, but with rain and gales these two had to be picked off the soil, and showered off.  All the other blooms from Rip van Winkle had been used for posies over the last two weeks.

The two little tete a tete daffodils are the last to flower from a clump planted last spring.  I have three little pots of ready grown ones to place amongst the border this week.  The largest daffodil is in reality still a very small one: Narcissus pseudonarcissus.  Joining them are leaves from the Mahonia soft caress, a stem from Euphorbia x martini Ascot Rainbow and a few stems of Erysimum 'Bowles's Mauve.  The fern is Polystichum setiferum Bevis.

Going out to choose and cut flowers is getting me into the garden and noting down jobs to be done.  For example the new crosier shaped fronds are starting to unfurl but they are hidden from view by the surrounding older fronds.  I am in a dilemma as to whether I ought to leave the lovely but older green fronds or cut them off, and the Erysimum has outgrown its position but the early flowers are being visited by the bumblebees.  Am I to cut it down down or leave it?  Perhaps I am just in a dithering phase, but I am sure I shall get round to it this week, and clear the epimedium leaves at the same time, in readiness for new growth and flowers.

The stems of the Amelanchier which I posted look pretty with their little shoots of blooms....but they are not as well formed as the ones on the trees will be in a couple of weeks or so.  They are still worthy or decorating the room for the afternoon Sunday Tea ceremony.  Cathy has an oriental arrangement for her Strawberry and Cream Tea....do go and have a look!
Posted by Stasher at 10:49

Labels: In a Vase on Monday, Weather