1.  Last autumn, I  added Thyme 'Jekka' to the gravel garden as I found its form interesting.  It is quite prostrate spreading out in every direction.  Now that it is in flower it proves itself worthy of a single solo appearance set off nicely by the gravel, and up to now used purely as an ornamental.

2.  I've bought my last lettuce from the greengrocer for some time.  At first I shall pick a leaf here and there, but I also ought to get on to sow a few more seeds to have plants to follow on from these. 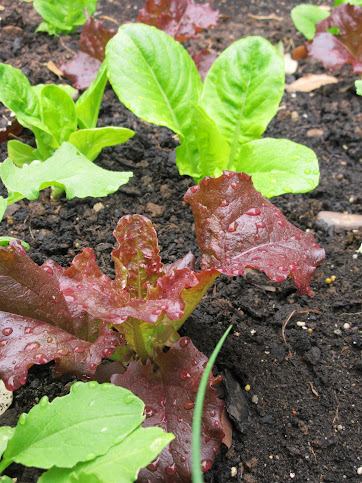 3. It is that time in between the spring and summer flowers, but with a little bit of rain this week, the plants have perked up considerably after weeks of drought.  I watched the flowering stems of the Sicilian Honey Garlic, Nectaroscordum siculum. slink around, and contort themselves as if sinewy snakes, and then the rain came and it is as if the great snake charmer played the tune which caused them to stand on their points.  They grow near the tip of this peninsula. 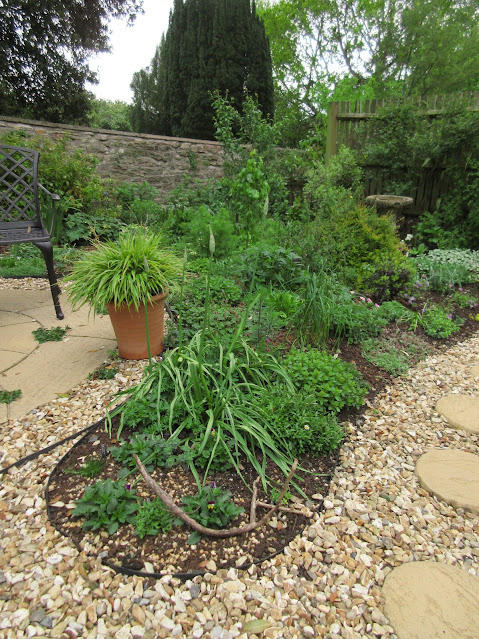 4. Rarely seen by me as it grows on the fence on the windowless side of the house, but much appreciated by my neighbours is Clematis Montana Warwickshire Rose. 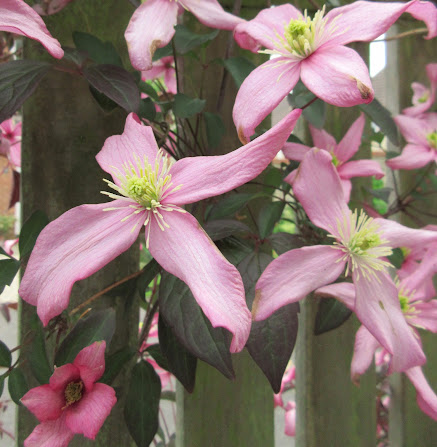 This was originally one of those Morrison bargain small clematis, nurtured carefully, but now starting to give a lovely display.  I love the scent of this one, and find its dark foliage very attractive. 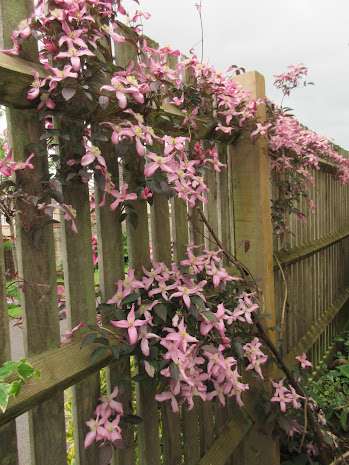 5. This is a small herbaceous perennial, which I have brought with me from several gardens ago, and even when not in flower has some neat nicely pattered foliage:  Tiarella Spring Symphony has so many flowers open at the moment.  If I dead head them all, after a short rest I'll get a second flowering. 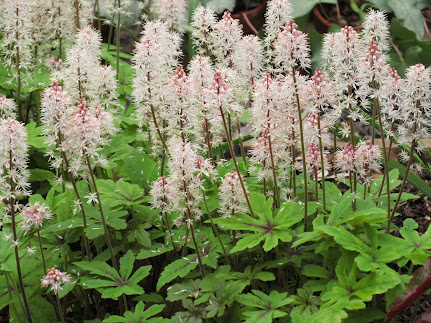 I have another Tiarella Mint Chocolate which has more dramatic leaf marking with a raised textured surface, but there is a little apricot in it its flower colour, but it is placed a little away on the other side of this conservatory bed. I see that there is one called Angel Wings, which I shall definitely be on the look of for at future shows and garden festivals.
6. Over in the shady border, I have recently planted a new primula to me: Primula sieboldii Spring rose.  It is rather bowed down with all the rain.  If it does well, I may well have some more cultivars as part of my Christmas 2021 presents! I think Penny's Primulas will be where I order from. 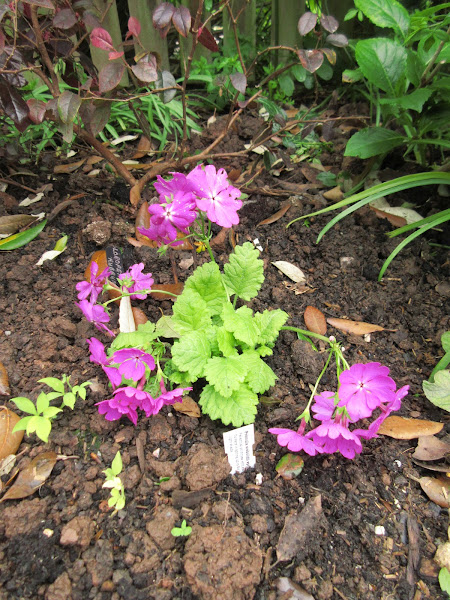 and just look at the structure in these beauties:
This fern has been pot grown for several years now, and repotted last year. Its  beauty can best be admired close up, and it suits the tall pot, though I think it would look a lot more dignified in a stone pot rather than an old plastic one.
Gradually moving towards to the 'despatch department', but noted a couple of days ago by Mr S for its lovely flowering stems is Carex Ice Dance.  This Japanese Sedge may well have to dance to somewhere more permanent, out of its first pot, if I am to please him inside. Or maybe it ought to have a better pot. 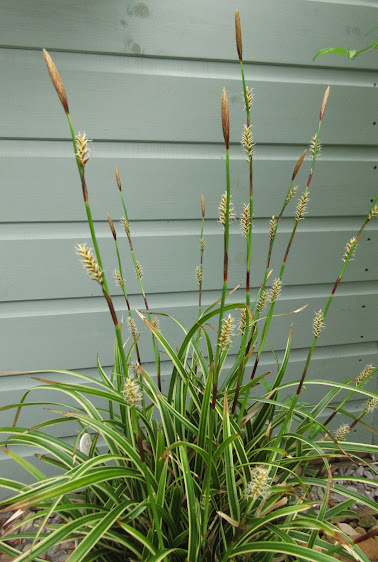 On my early morning pavement walk , slugs and snails are slithering home.  The rain has brought them out, so I shall be out assessing the damage in the garden later. Many SOS gardeners will be out getting on with all those urgent tasks today, but not before linking in with the Prop, or maybe they will wait and rest after their tasks and take their time to link in.