In a Vase on Monday - last in July

Another months skips by, time seems to be speeding up.  Again we have had a week that has been too hot.  We close windows and curtains not as in winter to keep the cold and dark out, but to keep the heat out and the sun from shining in.  However this is on one side of the house, and one o'clock marks the change, and we open windows and curtains on one side, and shut them on the other.

Yesterday evening I spent some time before dinner clipping back a few plants.  The geraniums had grown as far as I wanted, in fact further, they are now cut back, and a few flowers form Geranium Rozanne started off  today's vase. 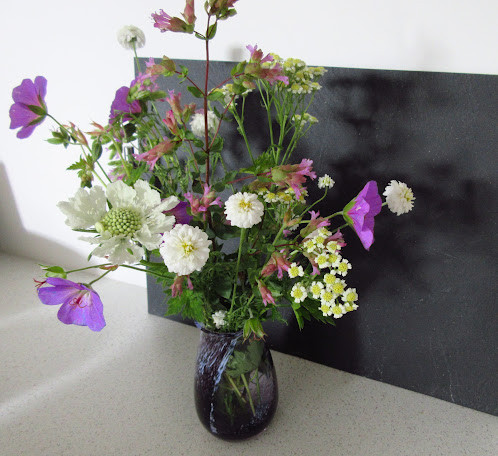 I think this is the first time I have used English Mace (Achillea ageratum), that is the stem at four o'clock.  I bought it for its name and now read it is quite a useful culinary herb, so I shall try and use some and report back. I've found a recipe for Chicken and this will be our main meat dish this week.

Another herb which I don't think is a culinary one is the double flowered Chamomile: Chamamelum nobile 'Flore Pleno'.  However it must rate as one of my favourite plants on account of the smell it gives off when the leaves are crushed. If only I could bottle that scent.

Another non culinary herb:  Marjoram Bristol Cross.  It has yet to grow the long watch chain flowering bits which extend as more and more flowers open.

Finally just one of the white Scabious: Scabiosa caucasica 'Perfecta Alba'.  I noticed that I had broken one stem in bud as I was dead heading the roses, and this morning it has opened.  Last year when a rather poorly performing plant was moved, I thought the petals were rather thin, and had expected to be disappointed this year, with the plant despatched, but the flowers are growing strongly with more robust petals.

I'm joining in with Cathy to see what her ramble through her garden has come up with. As I read her post I realise how different the weather can be within a hundred miles or so, here we have had thunder and lighting and rain one nice, poor Cathy must be having to water still. Today we are having wall to wall sunshine again!