Its been a 'British Summer' sort of week weather wise.  Rain and sun and the odd grey day suit me fine.  There has been a lot of chopping and pruning, with a few opportunities to make cuttings.  I even managed to fit in a whole day of visiting a couple of gardens with the HPS.  This virtual get together each week is organised by and facilitated by linking in with Jon the Prop, where we share with another gardeners and bloggers six items of interest in the garden.

1. On one of my routes walking into town when I take a detour to peer over front walls, there is a front garden that would do a seaside spar proud.  A few weeks back a sign appeared on the wayside offering a few spare plants for sale.  This is went I met Rex, and was invited into the back garden.  He had taken over a neighbour's back garden and it was a big area of 'production' as in a kitchen garden. In his glasshouse he had grown begonias from seed and they were the size to go into hanging baskets.  I put three in a my large pot under the Fatsia.  They are looking perfect: I wonder whether they will produce tubers that I can keep for next year? 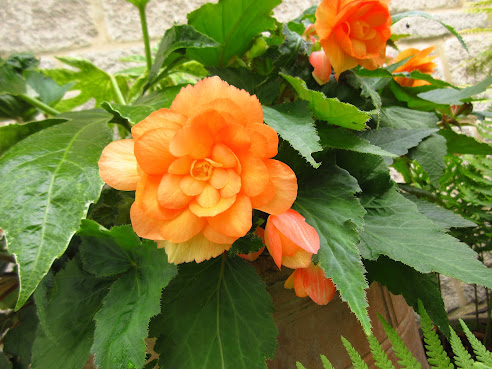 2.  My new tool arrived yesterday from Gardening-naturally just in time for me to prune the bay  to allow for the clematis to flower shortly, without being covered by the fresh fast growing new season's growth of the bay.  I can't believe I've managed to garden without one!  It is very light as amazingly sharp and easy to use.  I did clean it down after its first use. I'll be able to do all many of clipping without having to stand on the borders! 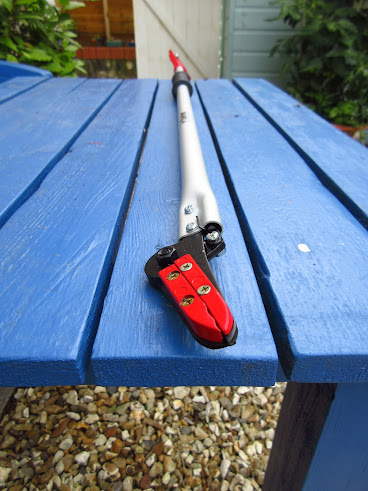 3. On another day this week our small gardening 'circle' called "Blooming Fun" visited one of the members' garden. Further up in the Mendips,  Ann has a garden with a back wall formed by the rock face of an old quarry.  To say I had stone envy would be an understatement!  Her formally laid out veggie area was elegant and decorative, and several of us admired her tree onions.  These are quirky but in my eyes decorative and interesting, and since we are all into giving away, sharing and accepting plants, I was more than delighted to accept these two:

https://treeonions.com/ gives some interesting facts about them.  They were described in an article of 1681 of the Royal Society and called 'Allium proliferum, although Bulbifereum, to be more apposit'.

4. Another plant similar to the Sheep's bit scabious which I have seen growing wild up on the Mendip tops is newly added to the gravel area: Jasaine laevis blaulicht seems to be settling in well.

5.  Planted in the Spring of 2019, Gooseberry Invicta has yielded her last picking of the season, just over 1.5 Kg, giving a total of just over 4Kg.  Gooseberry corner has done herself proud, and soon the red berrier of Gooseberry 2 will be ready to pick. 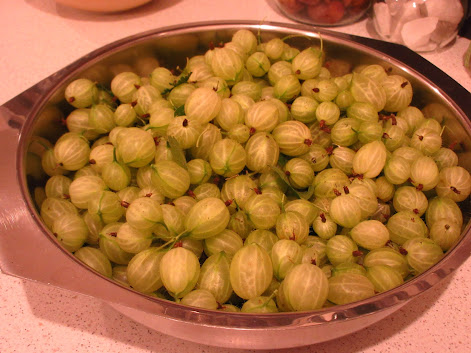 6.  Just before the flowering starts the form of some plants are proving that colour other than green is not everything! However before chopping down all the early summer flowering plants, there is still the business of seed collecting.  I bought The Seed Saver's Handbook when it first came out in 1996.   I did not have the time then to read the opening chapters, and simply flicked to one or two to understand how to collect...no internet tips etc at that time!  Having scanned a page or two now, the authors were, 25 years ago ,well ahead of current ideas currently in the press.  Time to have a proper read through. 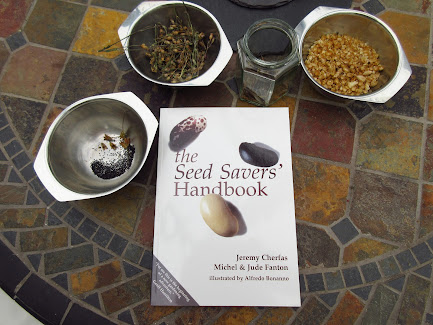