As members of the Somerset Hardy Plant Society, we were given the opportunity of visiting the private gardens at Holcombe Court.  The group had visited the gardens a few years into the latest transformation, and were looking forward to seeing it again today.  It was Mr S's and my first visit.

When Mr Nigel Wiggins acquired the property with 100acreas, some twenty years ago, he set out to restore the house and also develop the gardens to the highest standard. 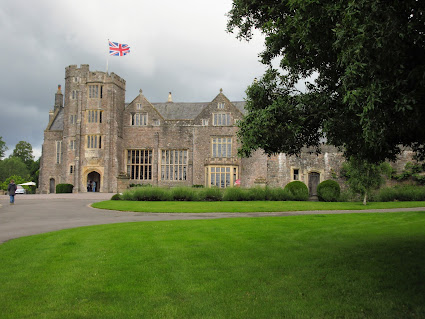 We were met at the arched entrance by one of the permanent members of the garden staff.  As we waited there for a few moments, it gave us time to admire the two Copper Beech Trees each side of the garden at the entrance, and to take in the fine house with Its Union Flag waving proudly above the castellated entrance tower at the end of the wide drive set in beautifully mowed lawns.

Our walk took us through trimmed yews and up along the drive to the front terrace where Head Gardener Kathy Worner was at hand to greet us. The large lawns were green and sloped off to the left down to a series of ponds, the lowest two I understand are fish ponds original to the Old Court, whilst the upper two were added in the nineteenth century. 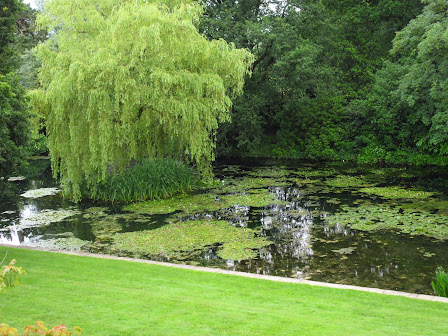 Kathy explained the garden maintenance regime  explaining that the staff have their specialisms.  Given the large walled garden with its many espaliered trees, and the large cider apple orchard beyond, it is not surprising that one person is responsible for the care of that area, and with the many yew and other topiary hedges in the formal parterres, another member of staff spends the bulk of time looking after that aspect. Additional staff work during the summer, or when more help is required.

Kathy very much enjoys the challenge of expanding the planting and arranging year round interest, with the only proviso, from Mr Wiggins, that there should be no pink.  The odd pink poppy that should emerge amongst the deep purples, simply have their petals removed quickly. Kathy frequently confers with Mr Wiggins, asking him what has particularly appealed to him along a certain border, and so over the last twenty years together they have built up the most pleasing of Gentleman's Pleasure Gardens. Paths are generously sized as are the borders and are perfectly in balance with the proportions of house.

Although plants are brought in to add to the borders to refresh and update plantings,  many plants have been in the garden for years and are kept rejuvenated by being pruned, or divided and  increased,.  Repeats can be spotted along the long borders sometimes in combination with different plant types, giving a most harmonious feel to the long borders.  Particular favourites are reds and purples, and Kathy has placed these judiciously with other plants. 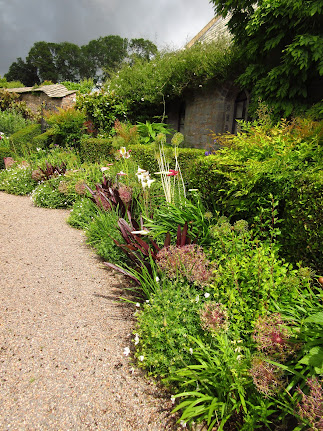 As we moved from the front terrace with its views down to the sloping lawns and lakes, we first had to pass through a set of  forget iron gates. 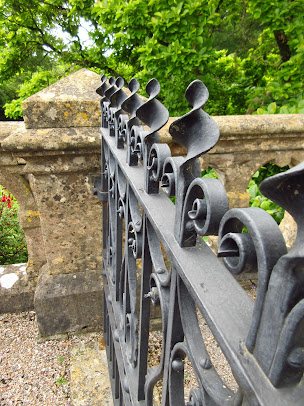 These were set within an low arched stone partition, through which tumbled the bluest of flowers from Hardy Geranium Johnson's Blue. 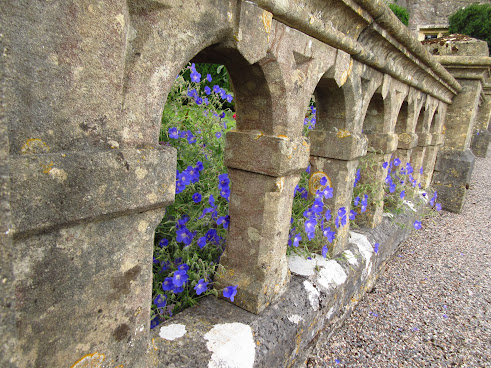 These opened on a stretch of garden where pillars of topiary grew up like green buttresses holding up  the house and where beds of purple lavender filled the air with scent, and the sound of buzzing bees 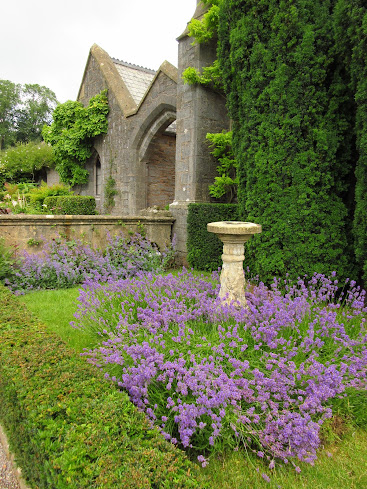 I was amazed as the long border came into view. 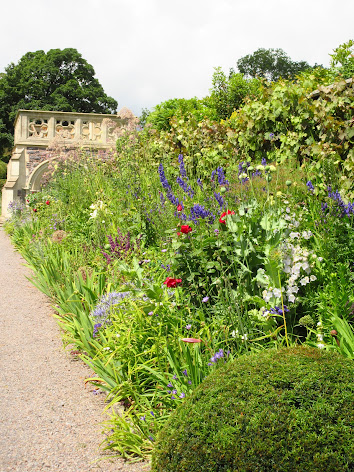 All along the right hand side of the wide path, and backed by a stone wall, the border stretched in the distance, except that in the middle was the most amazing of garden structures. 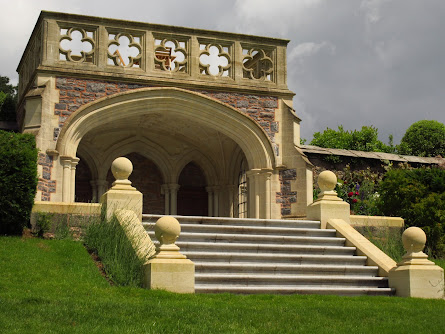 Described as a fan-vaulted gazebo in Country Life's article, which I read after my visit, the family and staff refer to it as 'The Bus Shelter', as there was a small structure which it replaced, very similar to the sloping roofed village type Bus shelters.  Indeed Mr Wiggin's shelter had Mr S with all his experience of renovating old buildings enthralled by the quality of workmanship, and attention to detail. 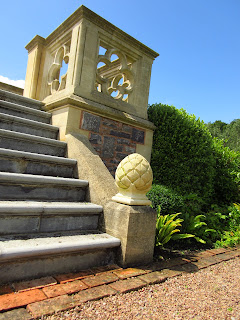 On the top of the gazebo is a large viewing platform giving a great vantage from which to view the gardens. Within the wall gardens there is a good view of the formal parterre arrangement with block planting of vegetables in the middle portion surrounding the raised pond and fountain. 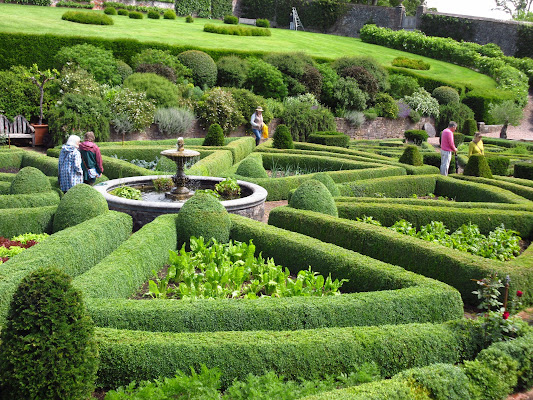 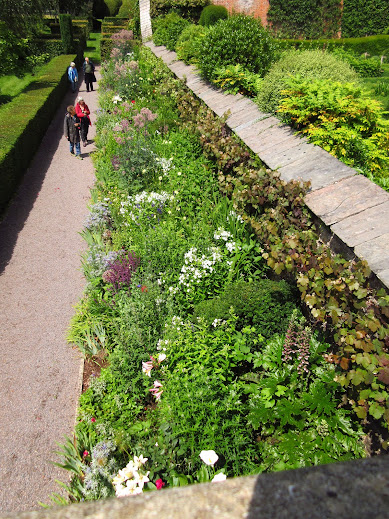 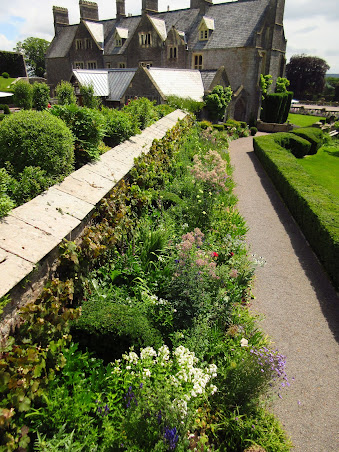 or a cheeky look through the pierced quatrefoil stonework towards the lakes. 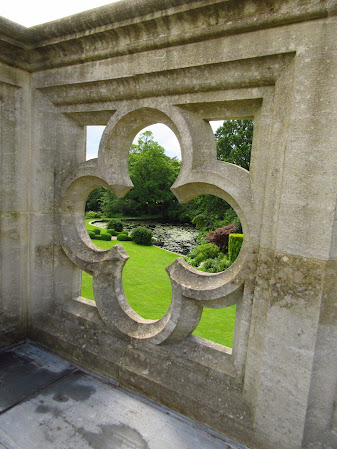 The structure of parterre within the old walled garden has been developed since 2001.  Further away from the house Apple arches have formed tunnels, which must be a delight to walk through during blossom time or later when the apples are ripening. The four tunnels radiate out from a finely trimmed centerpiece. 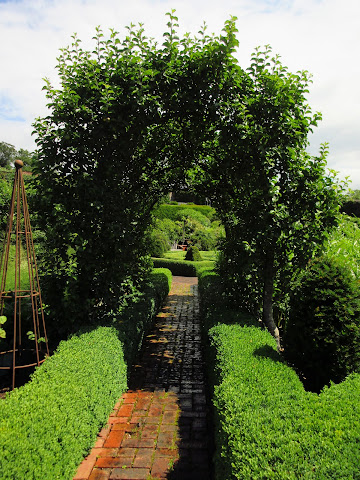 Such is the attention to details, that even the fruit poles and wigwams were made specially for the garden. Such was the quality of the workmanship, I just had to ask about these:  It was local Artist Blacksmith Simon Ridley. 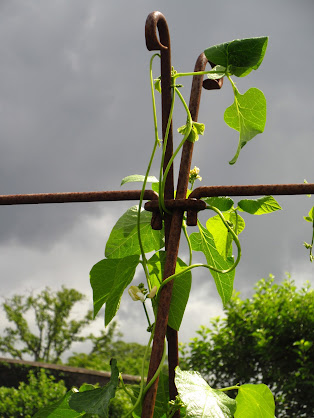 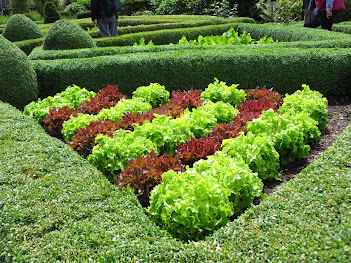 Close to the house the herbs form the basis of planting with the lavenders offering a sweet scent as you sit at the table on the bricked outdoor dinning area.   Column pear trees marked the centre of the lager sections, adding an elegant accent. All the brick paths were in excellent condition and very well maintained. 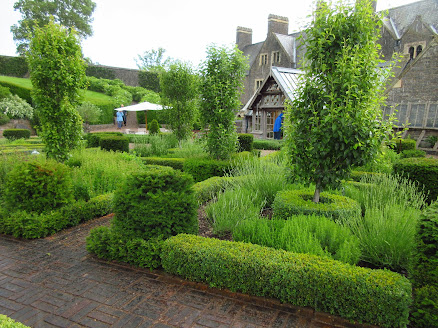 The Conservatory named 'The Glasshouse' with its beautiful timber roof and hand made dining furniture reminiscent of designs from the Arts-and Crafts period, has elegant planting of tree ferns and orchids.  Polished blue grey fossil encrushed Lias formed the windowsills, with the unpolished stone forming the steps up from the outdoor terrace up to the herb garden. 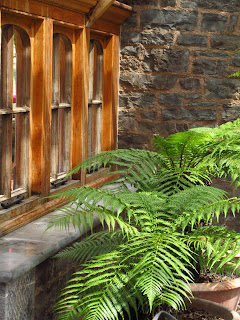 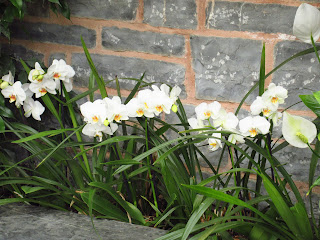 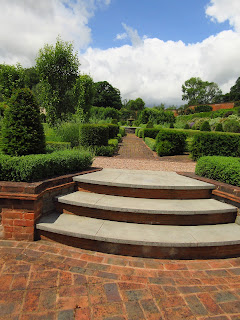 After all the details in the walled garden with its great variety, a change of gear as you walk the long grass walk bordered by the  'lollipopped' hornbeams so green and calming:  a lace walk to think and contemplate. 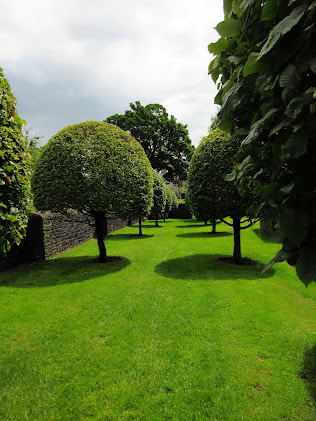 To walk to towards the 'ornamented' woodland, 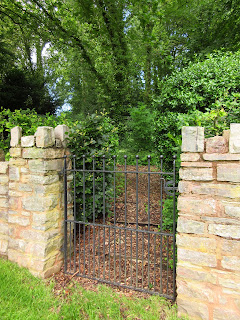 with the top section of the garden lined by hornbeam with rectangular letter box openings offering views to the upper reaches of the valley, and the recently planted orchard of cider apple cultivars. 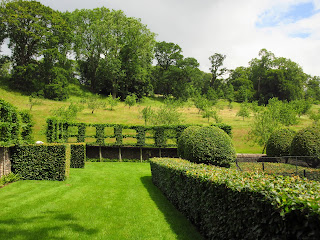 or reach the tennis court. 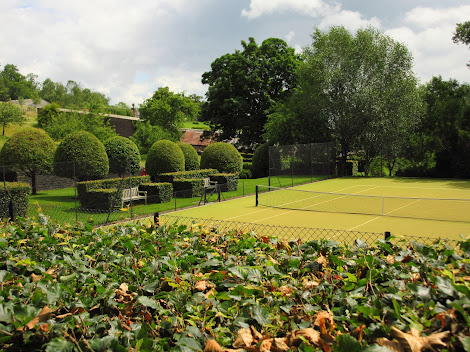 The planting around the ponds deserves attention. 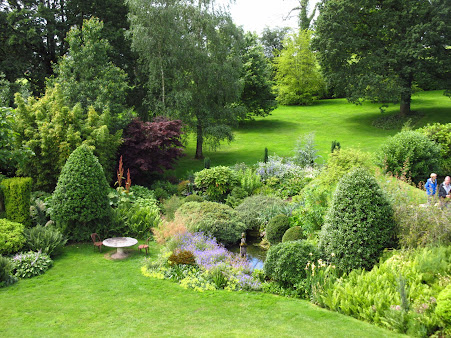 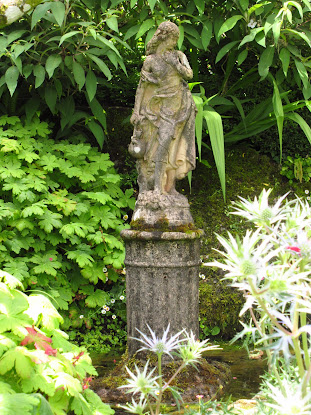 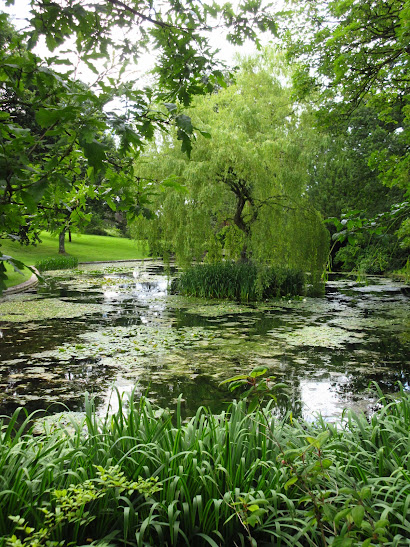 One leaves having the viewed the most handsome of gardens: designed, developed and maintained to a standard any Tudor Lord would be proud of.