In a Vase on Monday - Autumnal Hues

Overnight we have had winds and rain, and with the shorter days and slanting light beams in the house, it feels like Autumn. Yesterday, I noticed the seed heads forming on a Crocosmia, and thought they would go nicely with the Dahlias.  I have just one Dahlia growing in a pot.  I was delighted to be given a plant earlier this year by Alison, to whom I had mentioned last year that I was after Dahlia David Howard.  I seemed to have caught all the small snails and this morning there did not seem to be much more disfigurement.

Set off with its bronze coloured leaves it makes a fabulous late Summer and Autumn statement. 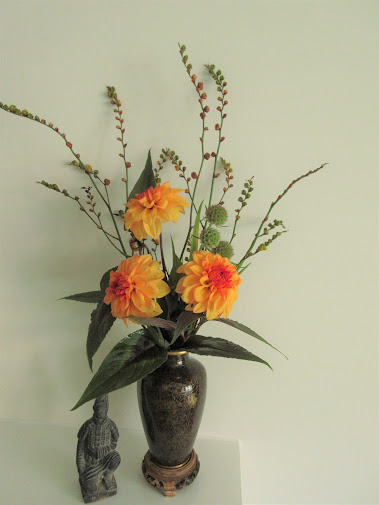 Just using the two elements didn't seem sufficient, but the addition of a couple of stems of Persicaria Red Dragon, and seed heads of Scabiosa caucasica 'Perfecta Alba'.  Both vase and the soldier are Chinese.  My mother had an extended visit to China decades ago, and it had been her vase, and following her persuation Mr S and I visited in the 1990s and have many enjoyable memories of our time there, and our soldiers are scattered around the house, reminding us of those days.

I've picked another  bunch of flowers which are destined to take to a friend, but it wouldn't be fair to show those.....

Cathy is our host, and you can follow the link just to view othr arrangements, or why not join in.  You need not do this each week.