As I have the smallest of vegetable areas, I amaze myself regarding the amount of pleasure I get from it.

1. Of course it would be far easier to cycle to the supermarket and pick up a bunch of spring onions for instance, but as I dig up a small cluster and bring it to the kitchen I know for sure there will be no soil down the hollow leaves, and the whole leaf is used too: the tops going into stir fries etc. I have just dug up the last couple of clumps, prepared them and they are fridge ready to add to salads over the weekend.  Spring Onion Ishikura Bunching  have stood the longest  from when they were first planted out. I shall try sowing the rest of the packet to see if they go over the winter. Starting them off several seeds to each small module has worked exceedingly well, and I shall adopt that method in the future. It makes for a ready made clump, and no need no any elastic band either.

2.The Leeks are planted out.  I just picked up a pot of seedlings from the market a month or so back, and as they were so small seperated them and pricked them out about 12 to a 20cm pot.  I forgot the hard work getting holes into clay.  When I had my allotment it had been double dug initially and was so much easier in comparison. I had planted the first batch using a dibber a week or so ago, and the remainder went it having used a trowel to dig a wider hole, which will slowly get filled in with friable soil and compost. 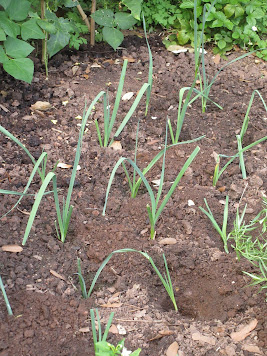 3. The lettuce are ready and look strong enough to go out now. These were the ones I pricked out just over two weeks ago.  Only one lost when it was tidy.  There are still far too many as far as Mr S is concerned! I am just dreaming up of all those delicious salads before the soup season kicks in. 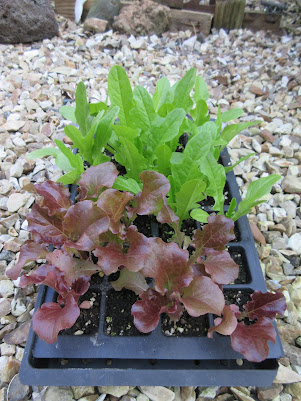 4. I had a Furtlenthuse over Chinese Garlic Chives: Allium tuberosum. 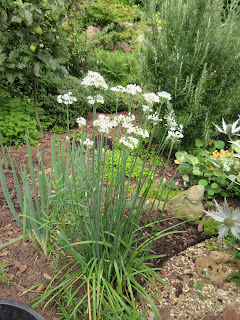 This was the clump which was much admired by our WI gardening group and I offered to share the clump as I had done with the chives.  The formation at ground level is more rigid compared to Chives, and a knife was required to
divide them. 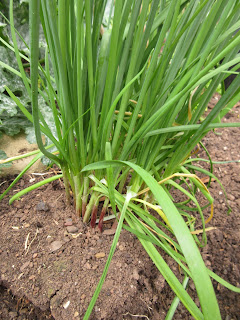 This is the clump as it came out with its lumps of clay.  After clearing this carefully and washing the roots, I wondered how best to divide them since they were clumped together with a hard woody base.

Maybe at an earlier stage before the flowering stems had hardened up the operation would have been easier. 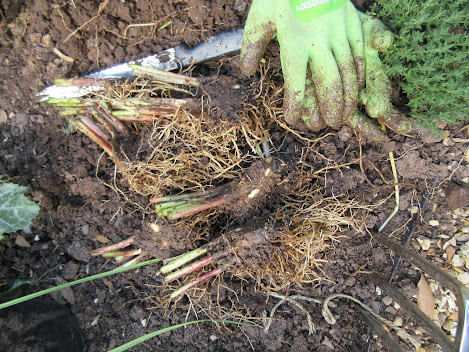 Within only three days, this morning I am happy to report that divisions are happy and throwing on new leaves. Again one could ask why bother when a small pop could be obtained for £2.  Well its the challenge of learning more about the plant, trying out something new, and getting rid of three pots from my stash as I give divisions away!
5. I had planted out my little coriander seedlings at that very tender stage last week, and the dratted molluscs raised the lot overnight. I might just start a new pot, and only plant them out when the roots fill the pot.  From a clump potted out earlier in the season, which had gone to seed, I harvested these green seeds. They were cleaned and just popped in the freezer.  I find these green coriander seeds used during the winter have just the same zingy fresh leaved flavour without the sliminess of frozen coriander leaves.  I crush a few green seeds in the pestle and mortar and add them to things like carrot soup, stir fries, curries, or pickles. The bees love the flowers in any case. Are there any tips out there on growing this plant well? I would love to hear. 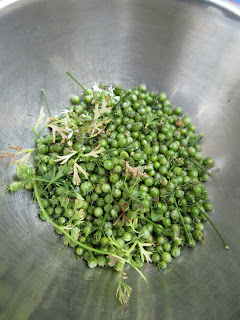 6. From the seeds gleaned from an old chilli which I had grown myself a couple of years ago, and set to germinate earlier this year, the two plants planted in the 'potager' are starting to ripen.  Most of them will be frozen, and some dried, with seed saved to start again next year. 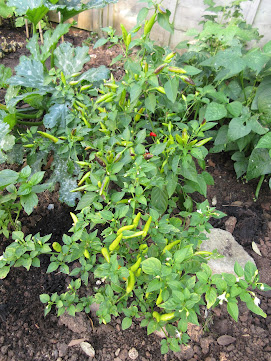 I wonder who else will have shown examples of Furtlenthuse when they share their Six with the Prop?
Posted by Stasher at 09:29