These were just some of the carpet samples which I brought home. I had gone through dozens at the local carpet shop. David and I had tried some 'National Names', but trying to use locals suppliers generally, we also popped into some local ones and found one which we liked. I visited a number of times and asked all sorts of questions are to advantages of one type against another etc. Ever patient they were, and the house has been measured up, and the carpet ordered. I have to keep in mind the wonderful feeling of carpets new and clean, warm and cushy under my feet. This picture of underfoot comfort is sustaining me through the four weeks that Paul our builder is here. We now have only a small piece of capet left in the hall way and the landing and that is coming up this weekend when I do the glosswork in the hall. 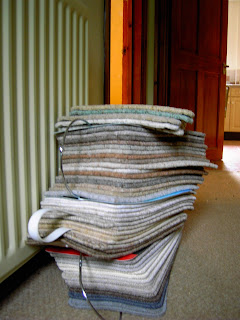 I can almost hear you gasp, what four weeks! So did Matthew, my son, but when I explained to what was being done, he emailed back that he understands that was necessary what with David's exacting standards. Cables are being sunk, skirting boards replaced, new fire surround, putting air vents in chimneys, small cupboard being upgraded, papering, painting etc etc. 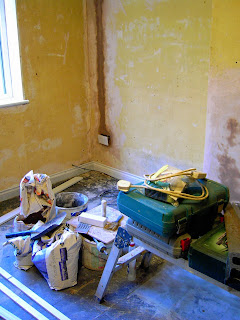 The first room to be carpeted will be the living and dining rooms, as they will be empty. We shall have a couple of days to shift some things around. Then the fitters will return to do a couple more rooms, and the same again. That's the beauty of having a local Company, at least they also most live in Kenilworth, so that reduces the fitters carbon footprint as compared to having a company from Stratford or whatever.