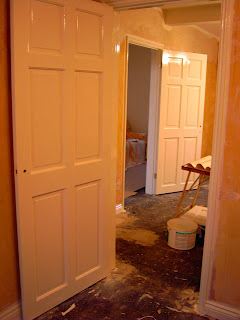 This was the situation earlier this week. Paul the builder was at the painting stage. We now have the walls crossed lined and papered with the final paper. What a job and well done especially as the old layers of paper were very hard to get off. The ceiling was specially hard to get cleared, unlike the bedroom paper which almost fell off leaving me to wash the ceiling down several times to remove the distemper.
There is now a new door between the dining and living room to match all the others in the house, and it now opens into the dining room. Previously there was only one position our armchair could stand in, just one inch one way or the other, meant the door would not open. That meant I did not often move the chair when vacuuming!
I've not been idle today! Well I have to have some fun and it has been such a lovely sunny day that I decided to go to see Rita, and I rigged up a tape player and also found her a lead to play her radio without using batteries, and had a laugh as I danced my sega. I had brought the tape during one of our holidays several years ago and this was the first time I had played it. Let me explain to non Mauritians what this sega is: it is a dance that the slaves started and now their descendants and all Mauritians love to dance to tunes played on home made instruments and guitars. The ballads are very topical and current ones describe the ups and downs of daily life.
Thursday is of course Market Day in Kenilworth, and I bought home eggs, pie, bacon, figs, mango, ginger, potatoes, and leeks.
I did paint all afternoon, and have completed all the gloss in the hallway except for the radiator and hatch....tomorrow is another day.
Posted by Stasher at 20:48