First Visitors after refit all the way from Australia and Korea 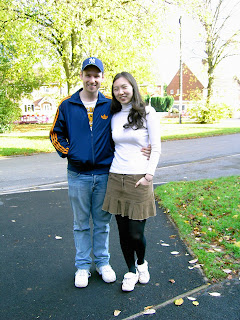 It was Friday evening, and we had yet to move bookcases, books and other items back to rooms, when David's nephew called. Nathan and his fiancee: Yura were over from Australia and could they pop in to see us as they were travelling down from Leeds to Swindon?

Well we rushed and rushed and yes when we opened the door to them on Saturday afternoon, we were ready for them. After a quick pot of tea and cupcakes bought earlier in the day from a charity bazaar in Kenilworth, we took them on a walking tour of Stratford. They stayed over Saturday and Sunday nights. I even managed to find that 2 for 1 ticket to Warwick Castle which I had stashed away.

Nathan had recently spent two years teaching English as a foreign language in Korea, where he met Yura. They both appreciated my home cooking and we enjoyed getting to know them a little better.
Posted by Stasher at 15:38