I was saddened to hear from my craft group, than fresh produce and home cooked items are no longer wanted at church harvest festivals in the area. They thought this was a real pity, so I suggested that in our own way, we give thanks for the good food that we have access to, and perhaps just make something nice to share with friends. 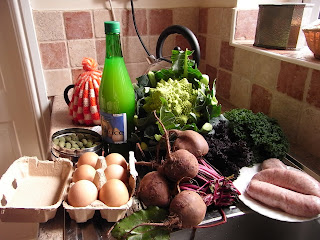 Not one in church, but my own display, with thanks to farmers, and market holders. This is what I brought back from this Saturday's market in Warwick. 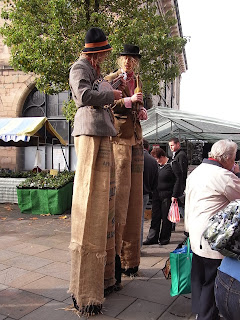 To amuse the crowd at the larger market which incorporates local producers, were a pair of buskers dressed up as scarecrows playing instruments.
In the afternoon I baked a large batch of flapjacks and following on my theme of trick biscuits last year, added finely chopped crystallised ginger, and as we had a large pumpkin in the window with flashing light, added shelled pumpkin seeds. The flapjacks were down a treat. We had cut up small pieces so that the trick or treaters, could sample, before deciding whether they wanted a whole piece. I think the message was spread around very quickly, as we had over 40 excellently dressed and suitably scary callers....even the very little ones who dressed up as evil? fairies and princesses had given their outfits a Halloween twist. There were a couple of little ones who said they did not like ginger, so maybe next year, the treats will be along the chocolate theme.
Posted by Stasher at 17:47