Unlike last year, we are having our 'Summer' very late indeed. Today Mr S and I were out in the garden and it was warm...so warm that we had to have the windows open when it was time for lunch. 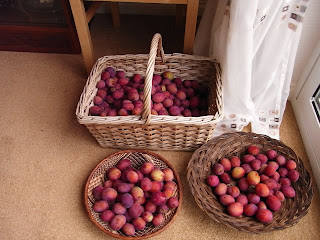 The time has flown by during October. After the pre holiday busy period, trying to cope with a bumper crop of plums, the post holiday period was filled with slower activities. If it were not for downloading the contents of my camera, then I would be hard pushed to think about what I had been up to.

When I got back from Whitby, I decided it was time to harvest the pears. Our two young pear trees were heavy with fruit. I brought back a good sound box and dividers from the fruit section in Salisbury's and had harvested most of the fruit, when I read the label....One of the fruit tree labels said harvest in October. So I left the rest for a few more weeks. The fruit continued to grow, and this is just one of the late harvested fruits, which shows that there are about four pears to a Kg. Next year, if the poor tree is not having a complete rest, I shall thin the fruit well and wait until October. 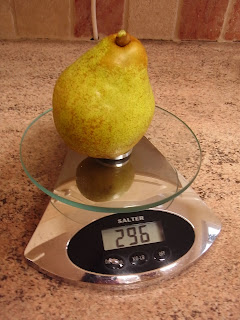 When I was young and growing up in Mauritius, I think the only pear I may have eaten was in the form of small cubes in tins of mixed fruit salad. One of the tales which my mum used to repeat, was of my night forays to the fridge, and when I was pretty young I went to the fridge and eat more or less the whole contents of a big party size tin of fruit salad. I have grown out of the habit of late night eating! And faced with such a big pear, I sit on the settee with plate and knife, and share the feast with Mr S.

At the market in September, instead of the big green pineapples, which I think have been developed for the canning industry, they had some lovely glowing golden small pineapples, exactly the same size and shape as the small ones which grow in Mauritius. These smallish but deliciously sweet pineapples were two for £1, and although I would only need one, thought immediately of taking one around for my Mauritian friend Marie-Claire. But surprise surprise, she did not know how to peel them. In less than five minutes, I had demonstrated the technique, and from now on, there will be more than just tinned pineapple on their table. 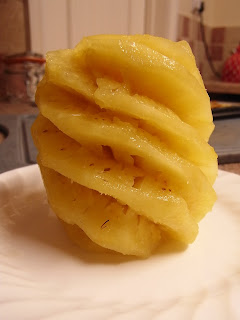 When I got home, I proceeded to peel mine, and yes the taste was just the same, this pineapple had been sun ripened for sure, and as I bit into a slice, I was transported back to that island on the tropic of Capricorn.