On the day Lizzie and I ventured out to Coventry, we were somehow funnelled into the market. Being new to Coventry I have yet to get my bearings, but was pleased to show off the exotic fruit and veg available. Before we could get to that part of the market, Lizzie was drawn to a Vintage bric a brac shop. After less than 5 minutes, we both were drawn to a picture of a Cardinal by J & J Cash. I had already shown Lizzie my Cash pictures back home and one of the purposes of our visit to Coventry was to go and see the ribbons and pictures at the Herbert Museum.


Lizzie is an excellent shopper and she soon picked out the best of the two similar Cardinal silk pictures. The amazing thing was that the last picture she had taken in Mauritius in Aunty Phyllis's garden was of a cardinal, which she called up on her camera to show me there in the market. In the Cash woven silk picture, the cardinal is shown perched on a branch of honey suckle, and we wondered whether honeysuckle exists in any of the normal Cardinal habitats, or whether the juxtaposition is a figment of some English designer's imagination. 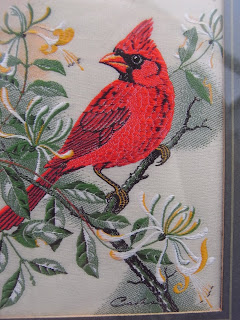 Using her excellent talent for bartering, a reduced price of £8.00 was agreed. Lizzie was triumphant and we could not think of a better present for her to take back to Aunty Phyllis. Our mother had had some lovely very large woven Chinese silk pictures which granny Teckkam had given her many years ago, which we returned so that Aunty Phyllis's two daughters can enjoy their heritage. Maybe it is because of those beautiful Chinese silk pictures which hung on my mother's walls, that I am now drawn to these. However I think my enjoyment is based on the appreciation of the skill of the designers and craftsmen and women who made these. When in Italy I have often noted how they are so proud of their silk weavers.....its about time we do the same for the Coventry Silk Weavers.
Posted by Stasher at 17:37