We were so lucky that yesterday was dry and warm enough for the thaw to have very nearly cleared all the snow even from the hills of Wales. Mr S and I had planned this little expedition when we saw this advertised by our favourite local coach company: Johnsons. There had been many cancellations from people wondering whether it would be safe to travel, so I suppose we were lucky that the trip went ahead.
*
Looking out through the windows over the hedgerows, the views of the countryside were wonderful. The low winter sun picked out the contours of the rolling hills.
* 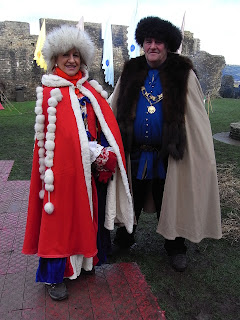 *
This was our first visit to Caerphilly Castle, and we enjoyed the Medieval Christmas Fayre. There was a little of everything, and we found things to entertain us: a goblet of hot mulled wine in a tent warmed by a central brazier. Mr S was taken by the very beautiful dog curled up on a sheepskin rug. We spent time watching knights sword fighting in the central courtyard of the castle, and quizzed a group cooking up their main meal of the day....though I spied the bottle of olive oil from a local supermarket, and thought the pastry for their patties far too white and processed, they could have used wholemeal at least! We enjoyed large baps with hot roasted pork with stuffing etc. At Neil and Lesley Butler's stand, I bought a hand made leather journal and some oakgall ink with a nice hand blown ink bottle. We talked about the journals and I was so pleased to hear that the beautiful fly( is that the term?) leaf paper just inside the cover had come from the same paper mill which we had visited just weeks ago in Amalfi.
* 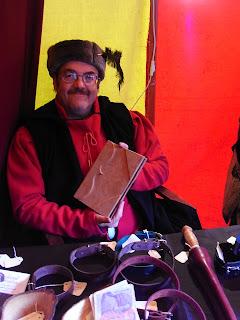 *
In the main hall I sat at the long trestle table whilst Mr S queued for another drink. We were joined by family groups, and two wonderful dragons came to talk to the children. Around us were various groups to entertain children with interesting activities including two potters wheels, face painting, and a circus training group.
* 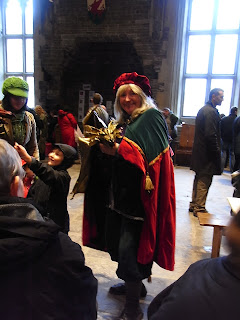 *
We had a wonder round the castle, and from one of the tall towers had a clear view of the arrangement of the defences and extensive moats. Inside the tower it was much colder than the outside, the stone clinging onto the chill of previous weeks. Ice was still covering most of the water and ducks and geese were congregating in the small patches of free water waiting hungrily for any morsels to be thrown to them.
* 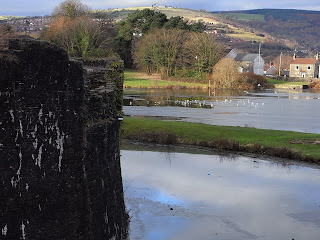 *
I suppose we have been spoilt by the Festival of History, and it would be less than honest to describe all the activities as having the Medieval Theme, but it was an enjoyable day out. Such Christmas Fayres seem to have sprung up over the last few years...I guess it is an opportunity for towns to market themselves and have shoppers leave their out of town shopping venues to return to town centres, and for small independent producers and artisans to have outlets for their work.
*
There was plenty of opportunity for people watching. The concentration on the children's faces as there were shown how to throw a pot, and the look of delight as they walked off with their creations was wonderful. The anticipation of children waiting for their turn to climb steep stairs to visit Father Christmas who had arrived at the same time as we did in his open horse drawn carriage was a marvel, was sufficient to melt any heart yet to feel the magic of Christmas.
* 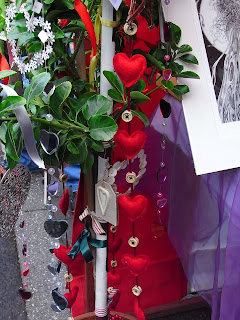 *
The street market was equally interesting, and we ended up at the Farmer's Market, where we had more drink and food...
Posted by Stasher at 12:38

Labels: Days Out, Presents to myself