Its a white out

On Friday we had a very fast downpour of snow lasting less than an hour, the final flurry was fast and furious and sounded like a downpour of hail. Then the sun came out.... all the while I was busy with the white stuff in the kitchen.
* 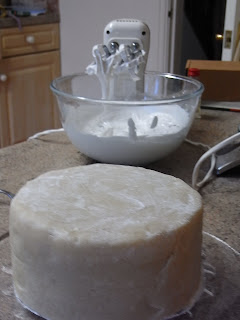 The previous week I had made the marzipan from scratch which makes covering the cake very easy, and set the cake to dry out, ready for icing. Since the very cold weather, I had also been spending my 'enforced' stay at home time cleaning out all the cupboards in the kitchen and around the house, so I knew exactly where to find the little box which contains my Christmas Cake decoration, first bought in Swindon in 2007.
This year, instead of the usual 8 or 9 inch fruit cake, I am making a 6 inch one. With my calculator I carefully recalculated the quantities for the cake, marzipan and icing, and with the little bit of marzipan left, made the most delicious little biscuits, called Sardinian Almond Biscuits.
I only had 100g almond paste left over, so again, made about a quarter of the quantity of biscuits. These also used up the remainder of the egg white left from brushing the cake before laying on the marzipan. I used to use apricot jam method, but the egg white method used by Delia Smith really works well. Last year I ended up throwing away the remainder of the marzipan after it had sat in the recesses of the fridge for too many weeks.
The recipe for the biscuits came from an early birthday present from my very good friend and bread guru Vicki: a book by one of our favourite writers Linda Collister called Christmas treats to make and give.
This year I have been given some wonderful home grown apples by various people. All different varieties having different flavours and uses. One big green apple from Julian was labelled as being dual purpose. It is really good used either way, and needs no added sugar when cooked, and I must try and get its name.
Since I have been making small batches of Gelato most weeks, I decided to try my own concoction, based on three egg yolks with 350 ml goats milk and sugar, I added about a cup of cooked and chilled apple pure and also some sultanas which had soaked in calvados overnight. Mr S was amazed and so was I, the sultanas were reminiscent of the raisins in rum and raisin ice cream, but with the flavour of the apple as well as the calvados came through. Together with the Sardinian Almond biscuits, it was a truly delicious desert.
Posted by Stasher at 12:50