I'm still catching up with the bakes from Jane Mason's Book of Buns.  This was one of the December challenges and is on page 133 of the book.  I didn't quite keep to the recipe, which for a first effort is unusual for me...but I only had 100g of pistachios and just did not feel up to going out for more, plus I felt that 200g pistachios as listed in the ingredients would have made for an over nutty bake.  To compensate I substituted 25g of the butter for a tablespoonful of Pistachio Oil which I have had unopened in the cupboard for quite some time.

I followed Jane Mason's technique, but the various provings/risings took far longer, and as a lesson learnt, I would start this early in the morning, rather than later in the afternoon.  My list of ingredients were as follows for 16 buns:

Glaze...made up of an egg beaten with a little water, and a pinch of salt and sugar. 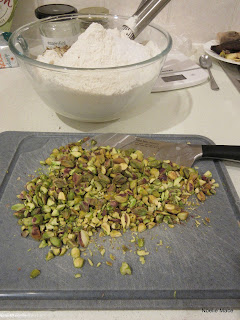 As the melted butter was quite hard to knead in, next time I make these, I shall try kneading all the ingredients except the butter and nuts for ten minutes, then kneading in the room temperature butter for another few minutes, with the nuts being mixed in after 30 minutes.  If I had an orange to hand I would also add some grated zest and a little juice.

These are truely delicious and giving off a wonderful aroma during baking.  The smell of Aniseed, honey, and nuts is so heady.  They freeze rather well and are delicious warmed up and then served with butter and honey...I had a few thin slices of the Quince Cheese I made a few weeks ago from the last of Penny's beautiful fruit.

On Sunday I had invited a couple of new neighbours Val and Kay, around for morning coffee...the Krachel were on the table, with Preserves, Honey and Coffee..everyone enjoyed them!
Posted by Stasher at 13:14

Labels: Baking, Friends, The book of buns by Jane Mason