I have a couple of recently acquired Pelargonium ardens growing in free draining medium in terracotta pots.   As I helped set up the website for the Henton Gardening Club, and then the Facebook group for members, I was impressed by the photograph by one of our members of Pelargonium ardens which we used as the banner picture.

At the Kenilworth gardening club, each year we had a growing a plant from a small plug challenge, and when I suggested this to Sally, she bought in some recently propagated Pelargonium ardens plantlets.  Some of the members bought one or two...I had two. 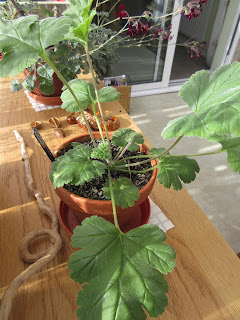 My two plants, now that they have regrown their leaves,  are slightly different as to their leaf arrangement.  On one plant they are well balanced, on the second the leaves have varying length stems, and each has yet to flower.  However I was not even put off as during the very hot period this summer, they shed their leaves. I have read that they can have a dormancy period, and when a few weeks ago the hot temperatures abated, and I had moved the plants to a cooler area, fresh leaves started to grow from the small surface root crown.  With cooler night time temperatures at the moment, should they look like falling below 5 C I shall move them to a sunny windowsill.  They will not doubt go into a 'winter dormancy', requiring a little less watering.

They are quite tricky, but I shall nurture them in the expectation of flowering when they are ready!  I shall 'injure' the growing point of the less well endowed plant and hopefully this will encourage branching.