I love looking at the wildlife in the garden...but was totally taken by surprise last night.  I was sitting quietly, reading, when I became aware of movement on the other side of the living room.  Glancing up a black spider with a relatively large abdomen was scuttling around the armchair.  It was the largest spider I have seen indoors in the UK.

There was no web, and if it was female I wouldn't want to think that I would leave her free to lay eggs, and hence be invaded with many dozens perhaps of such spiders.  Being on my own, I was aware that I ought to handle this spider carefully in case I got a bite.  For me even a small bite may lead to allergic reactions, and with no one around, I certainly did not want to put myself at risk.

I came back armed with a steel mug, and a sheet of paper, and went on the hunt.  Several minutes later I had found her/him and had it secure...but then at the last minute decided to photograph it before releasing it into the garden.  I placed it under a glass bowl where it scurried around the edge, and just would not face towards the lens. 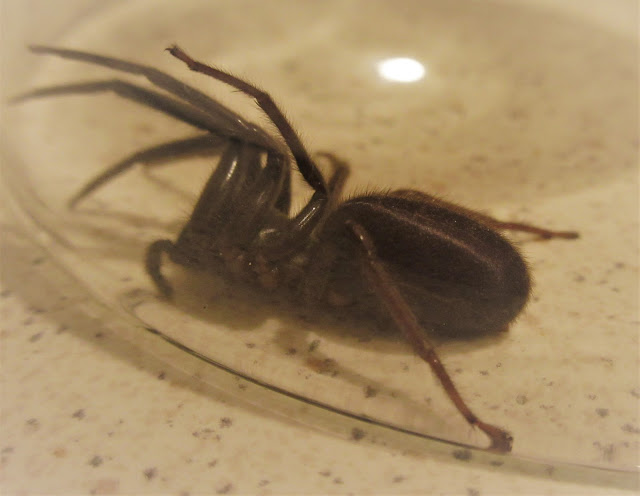 It was camera shy for sure, and I just could not get a picture head on of the spider.  I do however feel that the closest match is  tube web spider (Segestria florentina)