I'm very often inspired by the many bloggers who link into The Propagator's Weekly Six on Saturday Event: some of this week's six below is evidence .  I love The Prop's  theme this week.  It could have almost been mine!  So pleased he is 'full of doubts' aka an excuse to acquire more geraniums, I too have caught that virus.
(1) Herbs From last weeks links and from the comment Lisa left on my post last week, I discovered that like me, Lisa loves herbs. I like to grow the usual herbs for the kitchen and also am working on a little collection of decorative marjorams and oreganos.  This morning after rain the low growing herb  Origanum Kent Beauty is just starting to produce its hop like flowers. 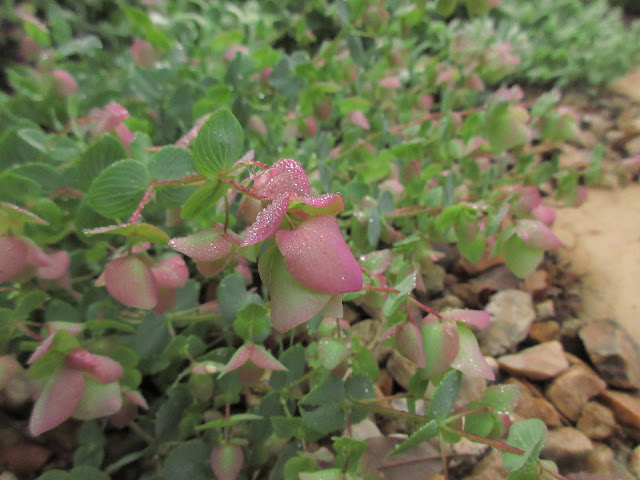 (2) Insects: The Shrub Queen has been studying the insects in her American Garden, and reading about some of the bees in her garden was interesting, so I thought I would share an insect I observed for the first time this week.
This is Oedemera nobilis or the Thick legged flower beetle.  Only the male has the thick legs, quite obvious here.  It is rather small but it caught my eye as its shimmering blue green wing coverings were covered with pollen.
Most several of the insects in our garden, have caught my interest at times and  some are mentioned on my blog.  Rose Chaffer Beetles have been flying around this week and devouring the pollen in the middle of the large roses same time as last year.  Yesterday I found one on the Astrantia, and taking off my glasses, being very short sighted, watched it gather bunches of small individual flowers to its mouth. In Come a little closer still Jim's Garden Ruminations, he has recently posted  detailed and knowledgeable pictures of Astrantia, which is well worth a detour. 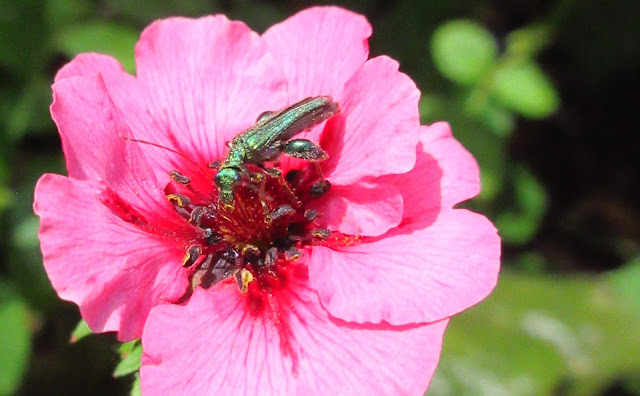 (3) I believe the flowering plant is Potentilla nepalensis 'Miss Willmott'.  An In a Vase on Monday and gardening friend Alison gave me a  small seedlings a couple of years ago.
(4) This is the week that young birds are exploring the garden. It feels that the garden is almost overcome with birdlife,  as all the youngsters are learning how to bathe, eat, dig for worms etc.  Filling the bird feeder is costing us more than feeding ourselves for breakfast.  All the blackcurrants have gone even before they were ripe. Thousands of Amelanchier berries have disappeared, but the gooseberries are too big now.  The youngsters are learning about what plants to land on, but a young blue tit  is yet learnt that stems of  Primula alpicola var. alba are just not strong enough even for a baby blue tit to hang off from. The Primula has a wonderful scent but get both me and him inside shouting "what has brought on our itchy eyes?" and the flower is moved to the garden table, see below.
(5) The first picking: 400g, on the second season for Gooseberry Invicta. One day earlier than last year, but a whole lot bigger, and lots more to come.  I would like to find out if gooseberries are till on people's list of fruit to look forward to. I would love to have your reflections here, or on my post: Gooseberries in the garden. Even if you grow these gooseberries elsewhere for example an allotment or not your garden, your comments and thoughts would be much appreciated. 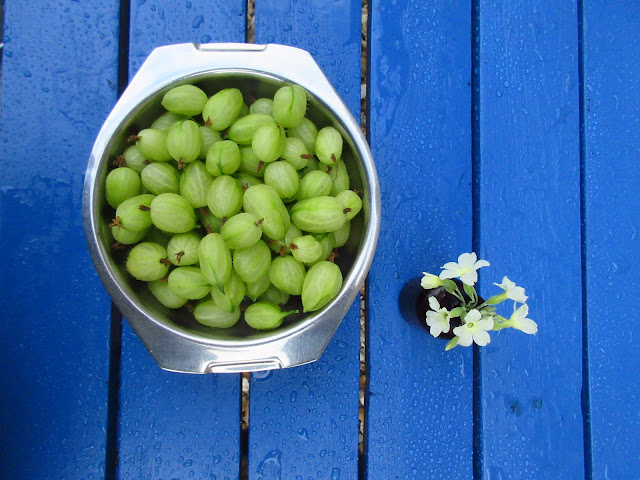 (6) I really did not think that the 'perennial' runner beans, which started life last year from Runner Bean Moonlight, would come to much.  When I started to prepare the area earlier in the year, I came across large dahlia like tubers, with signs of shoots.  I dug them to  move them to grow in a line long the fence.  Later the one in the foreground came up, and I was loath to despatch it.  In between one and four stems, mostly three are coming up each tubers and flower stalks are starting to grow in the leaf axils.  I look forward to comparing harvests. 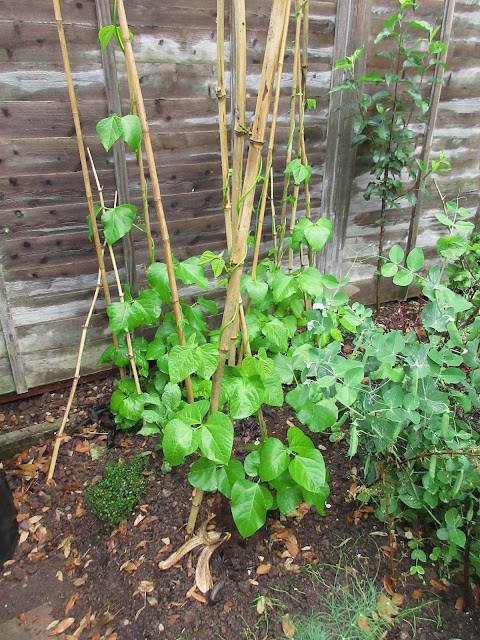